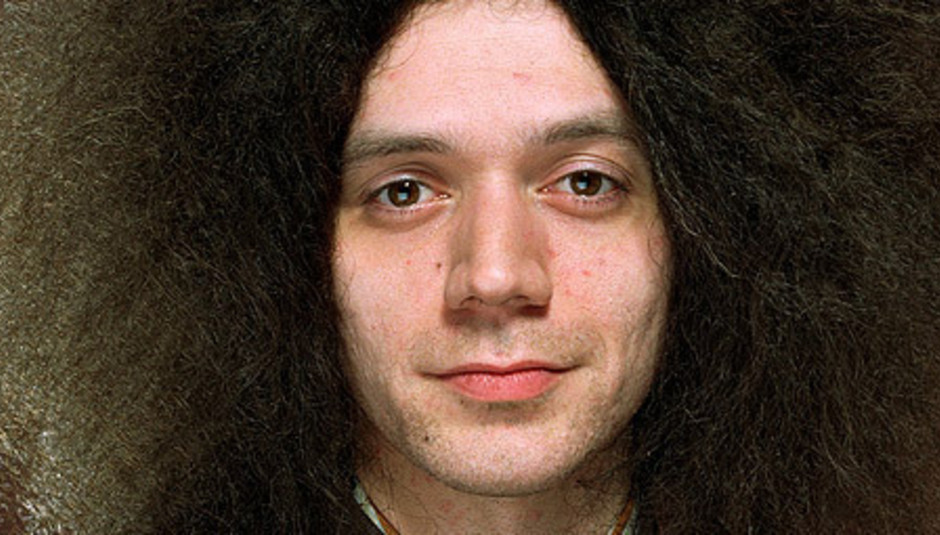 2010’s been a busy year for Seb Rochford. On top of Polar Bear’s fourth album Peepers gaining attention above and beyond anything he’s yet been involved with, he’s just finished a final tour with thrash jazzers Acoustic Ladyland, remixed Peepers alongside London MC Jyager, performed with theraminist Palemia Kurstin and recently took a road trip through six towns in a day, hitting the skins in a white van. Not a bad run at all, all things considered. Then again, it’s not a huge increase in pace from his usual modus operandi: Rochford operates a famously high workrate, playing with an ever-expanding roster of musicians, both within and outside of the jazz community he is typically associated with.

“Sometimes people say ‘you’re part of this scene, you’re part of that scene’,” Rochford muses, when I wonder about his niche within UK’s musical community. We’re sat in a chilly, chrome plated kitchen above the venue for the Bristol leg of Acoustic Ladyland’s farewell tour, and the roar of traffic along Stokes Croft outside the open window regularly drowns out his soft Scots accent. In person he radiates a quiet, thoughtful intensity that mirrors his presence onstage, keeping eye contact locked even when struggling to find the appropriate words. “But sometimes you don’t really realise - you’ve just doing what you’re doing. So it’s often difficult to be objective about what you are doing. I guess there is a scene though, because we play in lots of different bands.”

His cautious response touches on the reason to approach the subject in the first place. While his role as bandleader in Polar Bear finds him operating in distinctly jazz-influenced mode, the nature of the group’s music and the breadth of their audience betray a vision that reaches far beyond simplistic notions of genre. Rochford’s drumming itself is quite something to behold, a diffuse spray that seems to owe as much to African music as to jazz, all held in check by an intrinsic groove that’s tough to pin down but ever present. And alongside saxophonists Pete Wareham and Mark Lockheart and double bassist Tom Herbert, the later addition of electronic experimentalist Leafcutter John added an entirely new dimension to their music, one that saw it billow outward into glorious, technicolour 3D.

A committed sonic explorer, Leafcutter John’s role becomes most evident in the live arena: constantly switching between analogue and digital modes of sound production, he embellishes the music around him with all manner of clicks, pops, whistles and sudden bursts of static electricity, forming an intensely evocative, modernist counterpart to the rest of the group’s acoustic instrumentation.

“That’s what I like about John,” says Rochford of the initial decision to invite him to join, after the release of 2004 debut Dim Lit. “I’d wanted to incorporate electronics for a few years, and then I saw him, and he was very visual. Sometimes electronic music can be someone just staring at a laptop, but you feel that he’s very aware that he’s playing in front of an audience. So he gets them involved, what he does is very interactive. And so when I first saw him play live, before he started playing with us, I thought ‘we’ve got to get this guy’.”

Although there was some initial resistance to his presence by fans and contemporaries of the band, Rochford admits, by the time of their Mercury-nominated second album, Held On The Tips Of Fingers, John’s presence was a fully integrated, crucial component in the Polar Bear arsenal. “Sonically we’ve got so many more possibilities, because he’s coming from a very different place,” Rochford enthuses. “He adds something that makes everyone think in a different way. For me, he’s very inspiring to play with.”

After the longform, delicately considered compositions of the band’s third, self-titled record (“We spent a long time [on Polar Bear], I think we changed our approach - I wanted that album to have the saxes not so much soloing, but more interacting with John, and it took a while for everyone to get their heads round improvising in that way”), Rochford’s decision to change tack again for Peepers appears to have paid off. It’s the band’s most firey recording to date, capturing something of the atmosphere of tightly controlled chaos that surrounds them during live performance. And its release on the Leaf Label, renowned for uniting a host of disparate artists under a shared aesthetic, has exposed them to a wider audience than ever before.

“I just wanted to do that album in a really raw way.” Rochford tends to construct his sentences in hushed slow motion, labouring over words for a few seconds before continuing. “It’s the first album we’ve done when I’ve actually got behind the mixing desk myself.” After playing some initial shows at the Vortex jazz club, the band recorded Peepers in a single room, literally playing the album live. “I noticed that when I was recording rehearsals there seemed to be all this stuff happening, and sometimes when we had headphones on it was changing that dynamic,” he continues. “Without headphones, in one room, the way we were interacting together would be more like it is live.”

The result was one of the year’s most consistent and compulsive albums. Opener ‘Happy For You’ is as close to the punky scree of Acoustic Ladyland as it is to Polar Bear’s earlier music, all low-slung guitars and sax lines that chase one another in ever-decreasing circles, and ‘Drunken Pharoah’ spends its entire length threatening to collapse entirely, before it finally sways that little too far and falls headlong down the stairs. ‘The Love Didn’t Go Anywhere’, meanwhile, is the band’s most immediately affecting recording to date, its fuzzy guitar cadence resolving all the tension built up by Wareham and Lockhart’s solo turns.

That piece is entirely recontextualised for the highlight of Rochford and Jyager’s recent Peepers remix album, Common Ground. Torn and scattered through the scratchy analogue soundscape of ‘New Love’, tiny motifs loom into view for a few seconds at a time before sinking again. The overall effect isn’t a million miles from the soundworlds Philip Jeck creates from battered vinyl and ancient, slowed-down turntables – which is unsurprising, given the nature of its inception. “I’d actually been playing around with trying to remix the Polar Bear album, but because it was all recorded in the same room the separation was really bad,” Rochford explains. “I wanted to mess about with it, but it wasn’t working, so I thought ‘why not make a track by messing around with the vinyl copy on my record deck?’ So I just recorded myself improvising with the record, scratching it – I can’t scratch at all! – then chopped it up.”

Having previously worked with London MC Jyager on an Acoustic Ladyland remix - after discovering his music through a chance Rough Trade purchase – Rochford began sending his tracks across and tweaking them to match the recorded vocals he was sent back. The resulting album sees Jyager’s voice drift between clouds of vinyl crackle and creaky hip-hop beats, tracks constantly varying in tempo or dissolving for a few seconds at a time before pulling back together. It’s a little like playing an old, warped copy of a hip-hop record found in an attic or a charity shop back room somewhere. “I kind of like that sound, he smiles. “I had a Sade album and I dropped it in water, but I still used to listen to it because I actually loved the sound of it, it was really weird.”

Alongside exploring hip-hop influences with Jyager, several mixtapes Rochford has put together in the last few months reveal a mind constantly on the move. One earlier this year saw the bass-heavy London styles of Cooly G and Giggs fit neatly alongside the likes of Zed-U and Mos Def. Having grown up in Aberdeen but lived in London for years, does he feel the capital has influenced his own music? “I think it’s definitely had an effect,” he nods. “It’s my favourite place in the whole world I think, and most of the music I listen to is from London. It’s got such a strong indentity – all the grime stuff, dubstep, funky house.”

His eyes light up when grime is mentioned. “What I like about grime is that a lot of it is very expressive,” he explains. “To me it’s the punk music of now. There’s not much music around right now that’s political like that: they’re just saying what they think about stuff, whether you agree with it or not - it’s just their experience. The ones I really like are those who are being quite truthful. And you get a lot of people trying to block that, but there’s a reason why people are saying this. They’re not making this shit up.”

Later that evening, Acoustic Ladyland tear through the Croft like a hurricane, another form of modern punk. Fittingly for a final tour, they exude a hungry, predatory air, Wareham prowling the front of the stage with rock star-ish detachment. Rochford, however, somehow maintains his usual level of calm concentration, cloud of hair hanging still in the space above his head. “We’re just doing this last tour,” he explains earlier in the evening, “and then I think Pete’s plan is that we’re not going to play any of the old music ever again. He’s going to change the name of the band and start with new music. The way he was talking, and from what I’ve heard of what he’s written so far, it sounds like a cross between hip-hop and North African music.” There are, he reveals, recording plans afoot for sometime in early 2011.

Back to the present: cigarette smoke drifts through the kitchen and out the window into the cool night air, and conversation shifts back to Polar Bear’s music. As bandleader, he says, though there is a degree of flexibility in the final result, he writes everything beforehand. “When I write for Polar Bear I do it all in my head,” he says, almost glossing over the point as though it were the most natural thing in the world. “I sing it, go to the piano, work out where the notes are and write them down. And I imagine the whole thing, how it’s going to sound.” He pauses for a moment, maintaining eye contact. “I’ve always done that with Polar Bear. But I think that was because when I first moved to London, I was staying in someone’s house for a few months because I didn’t have anywhere to live, and I didn’t have an instrument. So with nothing to write on, I thought I’d see if I could still write music without an instrument. And I just got into that way of writing down what I was singing.”

It’s become a key part of Polar Bear’s musical identity. “The most important thing is to not let the instrument dictate what I’m writing,” he explains. “I want whatever I write for that band to be as close to what I’m hearing inside me as possible. Without any influence of ‘try that chord, try that chord’, without knowing what it sounds like.” He thinks, adds a proviso: “You do still get trapped in your own tonality sometimes though.”

In Photos: Cage Against The Machine