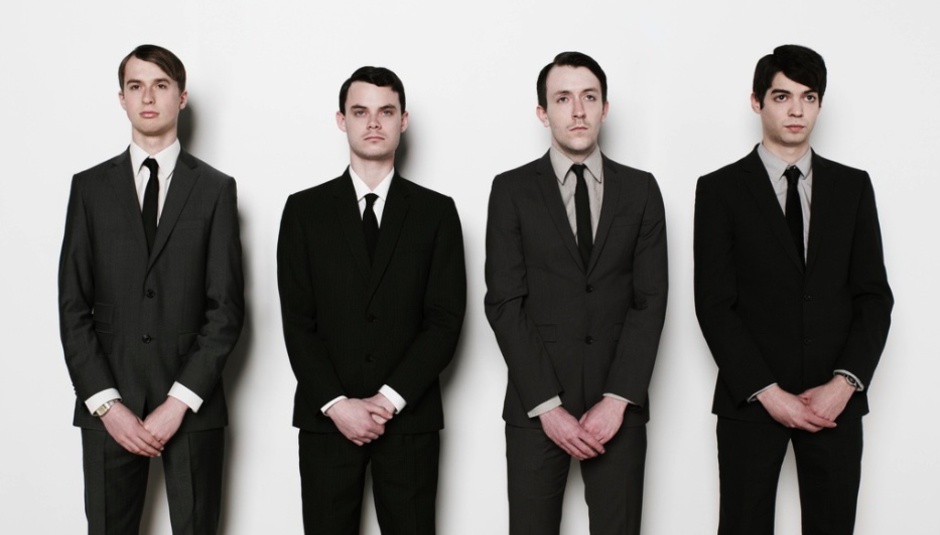 Having recently completed a European tour together, DiS got OMD and Mirrors to sit down and have a chat bout how electronic music has changed over the last thirty years, filesharing, and the doubters...

1. Mirrors have been accused of sounding derivative. Do you think electronic pop music is as relevant today as it was in 1980?

Paul Humpreys, OMD: I think that electronic pop music was the last modernist movement in popular music. It was futuristic and forward looking but now, in this so-called post modern era, there is no 'new' music or movement or musical fashion to dominate or to oust what's gone before. Therefore I believe that in 2010, electronic music is just as relevant today as any other musical genre. I personally have always been annoyed by the very dismissive word 'derivative' when applying it to music. Although it occasionally applies to a few 'copycats' out there who are void of anything new to say, it is used far too often to easily dismiss a band in one word when it's generally far more complicated than that. Songwriters and the songs they create are all 'derived' from the sum of what they have learned, music they have been exposed to and have analyzed throughout their lives. Songwriters have always taken influence from other people’s ideas and sounds and moulded them and built upon them to try to create something new and unique. It is certainly unfair to call Mirrors derivative, I feel Mirrors have taken an electronic influence from bands of an earlier generation but have made that sound their own, a sound that is very distinctively 'Mirrors'.

2. Why do you choose to play live bass when most of your sounds are synthetic?

Andy McClusky, OMD: I bought a bass guitar with my 16th birthday money. It was left-handed… even though I am right-handed… but it was all that I could afford. I still play with the strings upside down. Then I saw Kraftwerk 10 weeks later… It changed my life but we didn't have any money to buy synthesizers. Therefore, the only instrument I had was my bass... and Paul had to make various electronic noise making machines. The songs that became our first album were all written with my bass and a few cheap second hand keyboards... we were anything but an advert for modern technology! After a while we came to realise that our distinctive sound was actually created by the tension between the machines and the human element.

3. 30 years of making music. What are you most proud of and why?

Andy: Creating a distinctive sound. By unconsciously combining our love of 70s German music with the British glam we heard as kids and our desire to experiment we accidentally arrived at a sound that can now be identified whenever you hear a song by OMD… that is rather cool. Oh, and selling 40 million records by mostly just doing what the fuck we felt like doing… that's fairly cool too!

4. Drugs... Good or bad or ugly where electronic music is concerned?

Andy: Drugs are far more associated with rock bands than electro bands that's for sure, but I can tell you with great certainty that that doesn't mean they are not used and/or abused by them also! In 32 years of being in the music industry I certainly have seen plenty of drugs around electro bands... naming no names of course! At times it's been good, at times it's been really bad, and sometimes when road crews are involved, it's been downright ugly!!

5. Why do you think electronic music is still regarded as a niche genre within the largely guitar-dominated music world?

Questions for Mirrors from OMD

1. We are basically going to reword your first question to us. Over 30 years ago we were trying to be "the future". We love your music because we love the sound palette that you use, the melodies and lyrics, but can electronic music these days be more than just "retro- futurism"? How do you take it into the future?

Mirrors: You know the thing that drew us to electronic music in the first place was the seemingly limitless sounds that can be incorporated into it. In this respect electronic music will always have a place in the future, for music both commercial and experimental. Recent trends in electronic music, such as Dubstep and the blogged-to death "Hypnagogic Pop", have used distinctive elements from past musical styles to form a sound that still sounds fresh and new, and yet embraces nostalgia. As the timeline of innovation in music advances, the willingness to accept the past has seemed to us to have increased. The rip it up and start again punk attitude is itself a cliche now. Nowadays, musicians are unafraid of the past. At this moment, we're trying to make electronic pop music, with soul, but the future for us is very exciting. We imagine so many places that can be visited, but we don't know how we'll arrive there yet.

2. Are there any subjects for lyrics that continually fascinate you and are there any things that you would refuse to contemplate singing about?

Mirrors: Most of our lyrics are about human emotions, and how our perceptions are always, always being warped. Feelings of confusion, loneliness and abandonment seem to crop up fairly frequently! I suppose it's always more invigorating to write about the darker side of life, not that we think any of our lyrics are particularly depressing. There are no subjects we would refuse to sing about although we tend to avoid any political inclinations we might have. Of course we think about these things and care about them, but writing lyrics of a political nature is very difficult and almost impossible to do without coming across either preachy or idealistic.

3. Do you find yourselves frustratingly tied to the keyboards and electronic drums on stage or is that restriction part of being not rock n roll? We noticed that James got more confident and the dancing got a little more extreme as the tour proceeded. Will he ever be liberated from the keys to be a more traditional "front man", or is that also part of avoiding rock cliches?

Mirrors: We of course like to avoid rock cliches. James is most certainly already a "front man". When we first started, we all stood rigidly behind keyboards looking miserable and motionless. It was too cold, there was not enough of a feeling of performance from us, and we felt like it put people off our music, which is not cold and rigid, despite the programmed nature of much of it. The current set up of Mirrors though is not sacred, and we are already pondering possible future stage arrangements, lighting, instruments....

4. The internet has undoubtedly fundamentally changed the music industry and illegal downloads have removed billions of pounds from the industry, what are Mirrors views on this; is the internet a blessing or a curse?

Mirrors: The internet, and the ease of file sharing, has opened up to many people whole worlds of music they would otherwise have never discovered, and that is inspiring. Creativity can only benefit from this. There is a lot of beautiful music being made by people with little money, in their bedrooms, on their laptops, inspired by the music they hear on blogs and subsequently download. Perhaps you could argue that the overload of music available now has filled many a mind to the brim, leaving no room for personal expression, but I wouldn't. You can fit a lot in a mind!

The lack of money in the industry though means that funding is not there for many more ambitious, often costly, ideas to flourish. In the past, big labels could afford to finance more challenging acts that would gradually build a career, and be able to dedicate their all to their vision. The thought of a band such as Faust being signed to a label like Virgin seems utterly absurd now. That's the sad thing I suppose, that increasingly, only watered-down, vapid rubbish ever sees the light of day on major labels and has the chance to do well commercially.

5. It has been a constant battle throughout the years in OMD to defend the use of synthesizers as there are people out there that don't think its real music if guitars are not involved. Being an electronic based band yourselves, what would you say to the doubters who believe that electronic music is cold, robotic and void of emotion?

Mirrors: The term synthesizer itself is a misleading term! These wonderous machines do the opposite of synthesizing pre-existing sounds; they create new sounds, and they seem sometimes to have a mind of their own. There is always more potential within them - like any other instrument. Synthesizers can be explored and explored, and the music that can be made with electronic instruments is infinite in its breadth. Kraftwerk may have said "we are the robots", but anyone need only listen to Trans-Europe Express, and compare it to most of the turgid, boring guitar-based rock that has been produced over the last 30 years and to realise that electronic music can be deeply emotional. And anyone who says electronic music is not real music is just too simple-minded for our patience I'm afraid!

OMD’s current album History of Modern is out now on 100% - www.omd.uk.com

Mirrors are set to release their debut album Lights and Offerings in February 2011 on Skint Records. You can download monthly mixtapes by Mirrors over at www.theworldofmirrors.com