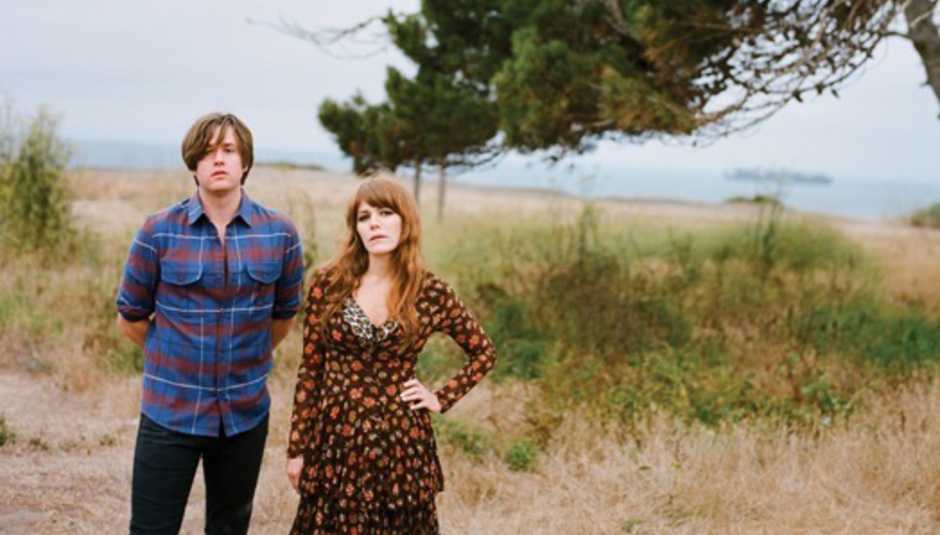 Midway through a transatlantic conversation to a hotel suite in Austin, conversing with Jenny Lewis and Johnathan Rice (or Jenny and Johnny, as their informal musical moniker now references them) courtesy of a crackling, fading telephone line; Johnny is explaining the basis of their musical companionship. “We’ve been doing this for so long man, nearly five years. It’d feel stranger not to be doing it”. All of a sudden, there is a pause in his voice and he says, almost in a stage whisper “I should tell you, Jenny is standing right above me now. I’m afraid if I say anything wrong I’m gonna get whacked”. There is a crackle of laughter from the background before he continues, “With the amount of time we’ve spent together, what you’re hearing is how comfortable we are with each other”.

This little interlude epitomises the relaxed, carefree approach that results in Jenny and Johnny’s debut record, I’m Having Fun Now being such a captivating listening experience. Their partnership was initially formed when Jenny decided to take a sabbatical from Rilo Kiley in 2005, the two originally happened to hook up by process of fate. “I was putting a band together for my first record [2006’s Rabbit Fur Coat]”, Jenny recalls. “I hired a guy to play keyboards and guitar so we started rehearsing. And I don’t know what happened, he got nervous; maybe he didn’t learn the parts. So I had to replace him and I begged Johnny to join my band. He said yes, as long as I hired Farmer Dave (Dave Scher), his best friend. And from that point on, Johnny and Farmer Dave just became a part of my band”. The two continued to play together on Lewis’s second album, in the meantime allegedly becoming a couple. I ask about this, only for Jenny to laugh “Let’s say we have a deep and long lasting friendship”. I’m not hired as a tabloid reporter (at least, I don’t think I am) so I don’t push the issue, though Johnny alludes to it when I ask about possible relationship tensions in the studio. “The way I see it”, he deadpans, “there’s only fifteen minutes of reel on a tape. So you figure out you can make out for like, seven of those. So it kinda works out”.

Their current project followed on as a natural progression from their previous musical collaboration. “There wasn’t a plan, I guess it was more like an unplanned pregnancy!” laughs Jenny. “We were touring my last record and our last show was in Tokyo. So we got back home and had a really, really bad bout of jet lag. We ended up writing fragments of songs at home; I’d be on the drums, Johnny would be on the guitar. And after being awake for about a week with jet lag, we decided to go into our friend Pierre (Rilo Kiley bassist) and record a few demos. So doing it all off the cuff, we sort of stumbled upon this new band”. Very much a personal project, the duo contribute practically all of the instruments on the record, with the exception of Rilo Kiley drummer Jason Boesel (“I think he’s the best modern rock drummer”, enthuses Jenny). The result is a record that maintains an intimate resonance, all the time imbued with a keen sense of amusement and above all, a reflective coating of carefree delights.

The importance of maintaining a relaxed atmosphere on the record was, according to both, tantamount in its creation and execution. “There was no pressure. I think when you’re playing music for a long time, sometimes the discussion of the music overshadows the playing itself”, explains Johnny. “So with this album, the title became our mantra. We did it because we wanted to; it was just…no pressure. And with Jenny being used to making major records in the most stressful situations possible, it was just for the fun of making the music”. Jenny agrees, “It was way, way looser and in a sense, way more focused. Just being the two of us, I suppose the record is recession friendly in that way!”

I am interested in the political undertones of the record’s first single, ‘Big Wave’. I am carrying out the interview the day after the US Midterm elections and every paper is reporting the dripping resentment towards the Obama regime and the state of the American economy in general. I am intrigued as to how they see their music and in that track in particular in light of the political situation in their homeland. Initially, Johnny plays a straight bat. “We both live in Los Angeles” he says, considering his words. “There’s this saying in America, some sort of adage: So goes California; so goes the Nation”. California is supposed to be where the American dream comes true. And it’s still a very beautiful place. But so many people are hurting so badly, it’s impossible not to notice. That song is about different waves of crisis spreading out across the country: financial crisis, personal crisis, medical crisis. It’s all apparent underneath”. I press a little harder to get an insight on whether they feel obliged to reflect this musically, but Johnny sees their music as an antidote to this. “It’s kinda manic here at the moment”, he explains. “We really do think of ourselves as old-school entertainers. We don’t feel qualified to influence people politically. Out main concern is to give people some relief when they come and spend their money: that’s genuinely touching to us that they do that”. Jenny interjects with a similar but subtly different take. “It’s a little bit of both. All of these things inevitably make their way into songs. It’s a combo really, a sour candy”. With a sigh, Johnny confers. “People are really hurting and fed up with both our political parties. And that’s why no-one is voting. Because it doesn’t make a goddamm difference”.

Moving back to the synergy between the two in the studio, it becomes abundantly clear that the process of songwriting followed the recording in being an equally relaxed path through their creative attributes. “I don’t find it difficult at all to work with Jenny: it feels seamless”, explains Johnny. “The songs we write come through naturally. Sometimes Jenny will play something and it arrives fully formed, it’s clearly hers and there’s little I can add to it. Same with my songs. And other times, we add little bits together, lifting each other with different parts, ideas, melodies. And that’s cool”.

Arriving in Britain later on this winter for a short tour, the duo are looking forward to bringing the album to these shores and Johnny is looking forward to re-exploring some of his Scottish heritage. “I’m so nostalgic”, he laughs. “I enjoy teaching Jenny all the old Celtic songs. She’s the only Jewish girl from the valley who knows ‘It’s a Grand Old Team to Play For’”. From that point on, the future could lead anywhere for them. “I just hope to always make records” admits Johnny. “I’m going to focus on this for as long as it makes sense to. Then try to figure everything else out”. And as for Jenny? “With Rilo Kiley; we don’t have any plans apart from putting together a B-Sides collection. And aside from that, it all depends. The songs we write dictate where we need to go, a bit like breadcrumbs…”

Before I go, I ask them again about how the process of writing, recording and touring inspires and afflicts them as a couple. In a few words, Johnny sums up the close, personal relationship involved in the musical process. “When you play music with someone”, he iterates slowly in his laconic drawl, “You really get to know them”. There’s a pause on the line for a second before he continues “And that’s why it works together. We know each other so well that we can say what’s on our minds, we don’t waste a lot of time”. And with a final dramatic pause, he adds a closing statement that, with the same collection of words, manages both to flirt with their relationship ambiguity and sum up the affinity of their musical chemistry. “Playing music with someone: it’s way more intimate than sex; it’s more intimate than anything you can ever think of. It’s that deep a process”.

I'm Having Fun Now is out on 29th November