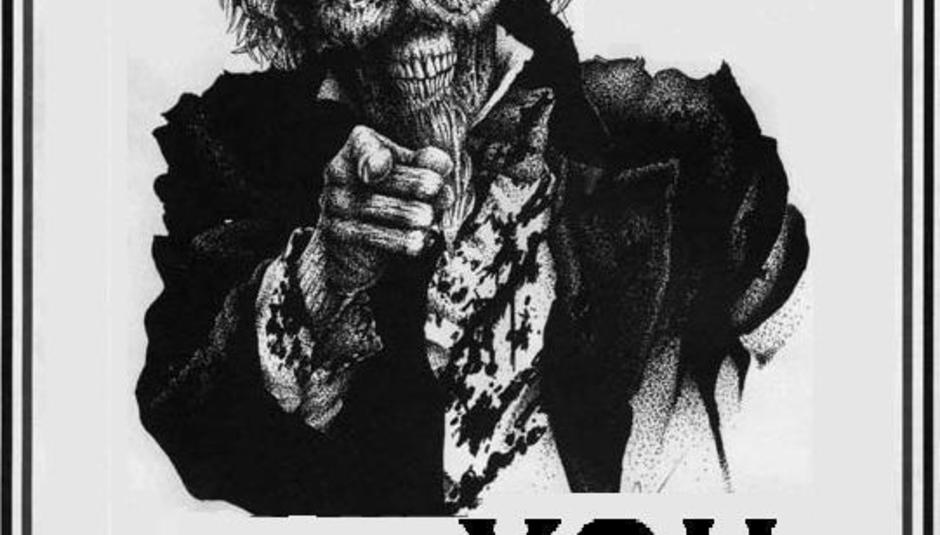 PB:What is your all time favourite horror film soundtrack?

ZZ: John Carpenter's Assault on Precinct 13th, it's a very minimal theme which makes it very powerful, just a bass line and a drum machine, revolutionary at the time for movie scores.

Have you been asked to soundtrack a film yourselves yet?

No not really yet, we are touring with a project right now where we wrote a new soundtrack for the Eisenstein film Battleship Potemkin, and we're playing music live on the movie, next time will at the Glasgow Film Festival in February.

Our Moog seems to be possessed by a malign spirit,are any of your instruments haunted?

Yeah that's right, I think all analog keys have a soul, that's why we like them, they're unpredictable, and this is what makes it exciting compared to digital!

Why did you choose to make your EP of John Carpenter covers and were you daunted by their iconic status?

We were lucky to have been asked to do a live show of Carpenter's music for the Glasgow film festival last year. We've always been big fans, you can hear it in our music, it's pretty obvious, so that was a good excuse for us. The melodies are amazing, so it's such a pleasure to play them that we didn't think about the iconic status. Then after the festival we asked our label Versatile if we could record our covers with producer Joakim, and that's how it happened. The idea was to show people that John Carpenter's music is not only a movie soundtrack, he wrote hits that you can dance to, and that's what we're trying to do live right now. Playing his music in clubs makes sense, maybe even more than in a movie theatre!

PB: When Goblin started did you anticipate you would go on to score so many horror films?

I started studying piano at age 8. I continued my musical studies at the Santa Cecilia Conservatory in Rome where I studied piano and composition. I choose piano because my father Enrico was a musician and a piano player but also because I really like this instrument. I was influenced by the rock prog bands of the 70s like Genesis, King Crimson, Emerson, Lake & Palmer, Gentle Giant, Yes , Deep Purple and many others. My father Enrico (1924-1978) was a very famous musician in Brasil in the 50’s and in Italy in the 60’s and 70’s. He worked for many years on the Italian television also as showman and entertainer, he also wrote many soundtrack for films and TV Shows including “GAMMA” which it had a great success in 1975 and that’s why I re-arranged it on the DAEMONIA album “LIVE…OR DEAD”.

Was it your goal to make a progressive rock album ? Or did it become progressive as a result?

At that time we were very influenced by British bands like Genesis, Gentle Giant, King Crimson, Yes, deep Purple, ELP and our compositions and arrangements were in the same style of these bands but with some of us, of course....

Tell us about transitions from Il Ritratto di Dorian Gray to Cherry Five and Goblin?

Il Ritratto di Dorian Gray was my first professional band formed in 1971 with Roberto Gardini and Fernando Fera on guitars, Walter Martino on drums, me on keyboards and Luciano Regoli as singer and we played covers of 70’s band. In 1972 the band changed and was formed by me, Walter Martino and Massimo Giorgi (now he's a famous Contrabasso concertist) and we played our song inspired by ELP. I met Massimo Morante when I was playing with Il Ritratto di Dorian Gray and we became friends even though we weren't playing together at that time. At the end of 1972 I recorded and composed some songs with him that we recorded in my "small" studio in Rome (with a Revox 2 tracks) and with our friend Giancarlo Sorbello, we went to London where we met Eddie Offord, a famous sound engineer for Yes, ELP, Gentle Giant, etc. He listened our songs and he liked them so much but he said we should do some more demos with a more complete band, so we returned to Italy and call Fabio Pignatelli on bass and Carlo Bordini on drums and we recorded our songs with a new arrangements. We went back to England but Eddie Offord was very busy with Yes and their gigs around the world and so we lived and played in London for almost an year with our band that was called OLIVER, with an American singer called Clive Haynes. In 1974, after our return in Italy, we started to record our album with a new Italian singer Tony Tartarini.

Was Il Ritratto di Dorian Gray your first professional band? What was the musical direction (was it close to that of Goblin or Cherry Five). Did the band leave any recording? There was a rumour that it did...

Il Ritratto di Dorian Gray was my first professional band but unfortunately we don't have any recorded tapes of that period. Originally the Cherry Five band was called Oliver and we lived and played for almost one year in London in 1974. When we returned to Italy, Clive left the group and we started to record our album with Cinevox Record, which was eventually released under the name Cherry Five, with a new singer called Tony Tartarini, ex member of the Italian band UOVO DI COLOMBO.

How did you get involved with Dario Argento?

Dario Argento was introduced to us by our producer Carlo Bixio during the recording of Oliver. After having listened to our music, he called us to perform the soundtrack for his new film Profondo Rosso (1975) and, later, we changed the name of GOBLIN and the album Oliver was subsequently released with this “strange” name: CHERRY-FIVE - not chosen by us. At that time Dario Argento was a very famous director and we were very honoured, and a little scared, to have been choosen to realize the soundtrack for his film. At the beginning we were called only to arrange the music of Giorgio Gaslini, but after two weeks,Dario which asked us to finish the film composing the missing music, so Goblin was born. The only difference between Cherry Five was the change of drummer; Walter Martino instead of Carlo Bordini.So we composed the main title song Profondo Rosso, Death Dies and Mad Puppet.

Suspiria has one of my all time favourite soundtracks. How did you go about writing and recording it?

I think Suspiria is our Masterpiece and is the most popular Dario film in the world. Dario gave us some suggests about the music and we worked in studio for two months, experimenting with any kind of instruments including Greek Buzuky, Indian Tabla, Mellotron, Celesta, the big Moog System 100, Church Organ and it was a very creative period.

Is it true that Argento played the soundtrack at full volume on set during the shooting of the film?

That's true, we always mixed the music very loud in Dario films and all the cinemas put in more loudspeakers to improve the audio system. Maybe this is one of the reason for the big success of our music.

Well, it's not easy to say, there is no music in particular that scares me, now I'm too used to listening to all types of music. In the past I was scared by soundtrack composers like Bernard Hermann (Psycho), Jerry Golsmith (The Omen) and, of course, many classical composers like Giuseppe Verdi and J.S. Bach. Anyway my goal is to scare the audience with my music in horror films...!