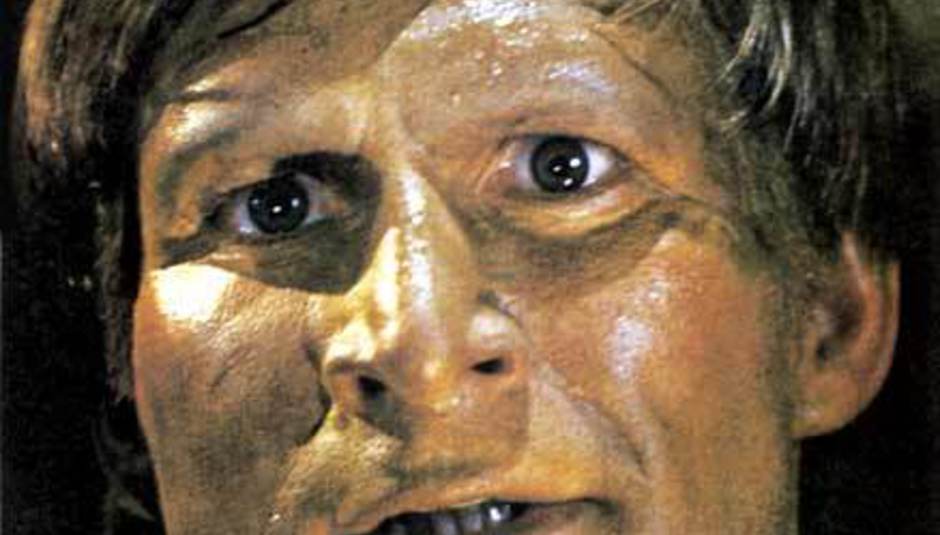 This week we have more bands whose singles are really hard to find, they are not smeared liberally over Spotify, SoundCloud, YouTube, Vimeo or any other popular musical delivery system you might care to create and then staff with young men in too-tight denims. Now, either Try Before You Buy is coming to an end, or bands' peoples are just a bit lax. Me, I make no comment about this fact, I merely present it for the benefit of the reader.

Also, it is a shame there are no clarinets on any of this week's sevens, because I have just learnt 30s jivespeak for this very instrument. The word you want is 'gobstick'. Use it well.

When 'Crooked Rain' started, it was all so much jangle to me. And as traditionally I tend to be fond of records with big pointy bits I can prick my finger on (by which I mean; POP HOOKS), it was not looking good for poor old Panda & Angel; there they were, playing as best they could and - figuratively speaking at least - I was chewing gum and rolling my eyeballs. My ears, definitely, were doing a cuh, and it was all sling your hook so-called Andy and so-called Pingu, I've got nails to file. But then the delightful, descending choirboy vocal lines came in. They were the clincher, they are the bit in this song that makes it other. So despite bafflingly sharing a name with a wicked ace LP by Pavement, it turns out 'Crooked Rain, Crooked Rain' is pipperoo. Although now I've said that I just want to listen to 'Range Life'. Did you know, you have to pay your dues before you pay your rent? Pavement said so. They were right flippin sods about the deposit anawl.

I am extraordinarily gone on Colin Bailey, he has a wonderful knack of releasing records with all my favourite noises on them. And I mean noises in the dance music (yes, all of it) sense; brash noises of such towering glee and internal organ-shaking merriment that one never wants to hear another strum for as long as one lives. When I put on ‘Won’t Be Long’ I cannot help smiling like a bad 'un, and I think that is the point, there are not nearly enough records that do this and I am extraordinarily grateful for those that do. This does not mean I am not able to identify how Drums of Death records will have the exact opposite effect on others; I know this will sound brasher and more odious than a hen night cocktail to some. (Quick, run and hide, ‘some’, the break at 2:00 will SHRD YR FCE. And that is fashion for 'make your head go all snazzy').

Little Comets despair of this country, they reckon everythink has gone well bad. But just in case you miss the point, here is an image that pops up at the end of the videothing:

‘Shall we have a Union Jack, but like, one that’s all tattered and torn?’
‘Yeah mate, brilliant.’
‘You don’t think it’ll be too obvious?’
‘Nah.’ It is a bit bloody spooky how the beginning of ‘Aneurysm’ sounds like a tinnier version of the original Casualty theme tune, because this week Simon MacCorkindale only went and died. RIP Simon, I used to watch you on Manimal and had an awful pash, and I shall never forget him saying the things he said at the end of Death on the Nile when it is revealed how he and the plainly mentile Mia Farrow have killed the rich lady, never. Though apparently they escape me just now. Anyway, after the bit at the beginning of 'Aneurysm' there is the bit in the middle, where it goes all DOOM and OH MOTHER OF DOG - and it is quite good. Even if - quelle circularity - it sounds a bit like montage music from a pretend 80s returnable series, i.e. Darkplace. Also, for some reason they have put a cheap disposable razor on the artwork, which is a bit 5 minutes till hometime, whoops-I-forgot-I-have-to-do-that-cover-art-for-Big-Dada-will-this-do-I-need-to-leave-now-Mary's-doing-balaclava-no-baklava-it's-me-favourite.

Cloud Nothings are not to be confused with Wild Nothing or Cloud Control. Though a supergroup would be nice, and having checked on MySpace - and if you are thinking of forming a band yourself (DO NOT DO THIS) - ‘Wild Control’ still appears to be free. They have also made a video which manages to combine Weird Science and Napoleon Dynamite (Weird Dynamite, yes, well done) on a budget of about three shekels. And it is mildly diverting, even if you are one of those people joining in the growing vilification of ‘hipsters’ and everything they (ironically) stand for. As for the song itself, I preferred to listen without pictures, where I discerned the following:

Essentially I will listen to this and thoroughly enjoy it for a whole month. But if you mention ‘Hey Cool Kid’ to me in two years’ time, I will not know what you are tawking about. I will look at you funny.

Broken Records once released a song called ‘If The News Makes You Sad Don't Watch It’ and for that reason alone I think I might find them mildly agreeable. Even if it is bad to bury your head in the sand in order to avoid politicians telling you that if you really, really want a library; and that in order for people to have access to books so they can learn things for themselves; you now have to build, stock and staff the library yourself. Because obviously now Great Britain is the LAND OF CHOICE, and it’s so great because you know, people definitely will build their own libraries, run their own schools and hospitals, I’m always doing it, I built a school in my lunch break just the other day and they'd all done a Masters in Quantum Mechanics by two. As for ‘A Darkness Rises Up’, it is a grand, grown-up pop song in the vein of quite a few other anfemic, grown up bands, with some strained and desperate-sounding man vocals in case you were not getting the message that Broken Records really, really mean it. You know, I could probably make a point here about the dislocation and wildernessising of The Mens in the 21st Century and how this is reflected in male indie vocals. But I don’t think you could stomach it and neither could I.

Slow Talk is not really called Slow Talk but Steven, and he comes from Mississippi where some people will insist on wafting along by the riverbank, and then banging on about getting dew between their toes because it is the law to notice that if you go there; it means you like the Mississippi more than anyone else in the galaxy, also that you IDENTIFY with all the areas many PRABBLEMS. In any event ‘O Brother’ shows extremely poppy promise, it pootles along with charm and swing and I think it is really good until Steven starts singing, and then I am trying to work out why he sounds like an insurance salesman from Basildon. Basildon! They make all the stationary paper there. In case you were wondering, and even if you were not, stationary paper is what you use for letters you write in a fury but can never send. Come on, let's all send them AND SEE WHAT HAPPENS.

I don’t wish to be willfully contrary, but sometimes when people go all BIG CHATS about how good a record is (and oh my goodness, Twitter is TERRIBLE for this) you wonder what in the pluperfect hell they are hearing; how can it be the same record you just put on. Their ears might as well be on a different hyperplane for all the similarity of appraisal. Now, I do not wish to suggest that this is how I feel about Gold Panda - he is clearly a damnably talented cove, I have ravey-raved about him myself. But if I am honest, there is not much in ‘Snow & Taxis’ that genuinely thrills, I am neither gladdened nor frightened nor naughtied nor moved by it. I still think it is a nice name for a song though, especially if you pronounce it snowantaxiss. Actually come to think of it ‘Snow & Taxes’ is better. Somebody tell him, I’m sure he’ll be FASCINATED.

The 2 Bears - ‘Church’ off of ‘Curious Nature’ EP (Southern Fried)

The 2 Bears vocal style is a little too everyblerk and cockerney for my taste, but I will not deny that ‘Church’ is a perfectly assetable pop tune which it is absolutely pointless you getting ants in your pants over. As for the video, it has Care Bears in it what I hate because I was never allowed them. Not like that SPOILT COW VICKY EDWARDS. Her Granddad worked at Mars and she got a WHOLE CARRIER BAG full of chocolate every Friday and all the best parts in the school play even though I WAS AMAZING AT SONGS AS WELL. Not that I was jealous or anything. She’s happily married now, whereas I write about indie bands and have no boyfriend. So who’s laughing? Not me.

Pleasant. Our Esteemed Editor habsolutely loves them. He said ‘Wendy, if you do not mention Let’s Buy Happiness I will sack you.’ He really did. What a bastard.

A re-release. But if you want to know what I thought about it when it first came out, you can go here. I liked it a very lot. I’ve gone off him now. Let’s not get into it. Headbands.

I mention this mainly because the press release was very amusing, positing as it did that the REAL Tommy Sheridan has timed his court case in order to perform a PR piggyback on Super Adventure Club's new album which has just come out, rather than the other way round. Also, Alan at Armellodie wrote 'AWRIGHT FANNYBAWS' in biro'd caps on the jiffy bag this came in, which was basically the highlight of my week. Oh man, I'm so lonely.


Wendy is on Twitter, here.. This week she actually saw some people in fluoro safety tabards. Oh, alright, strictly speaking they were waistcoats. It's not the same.