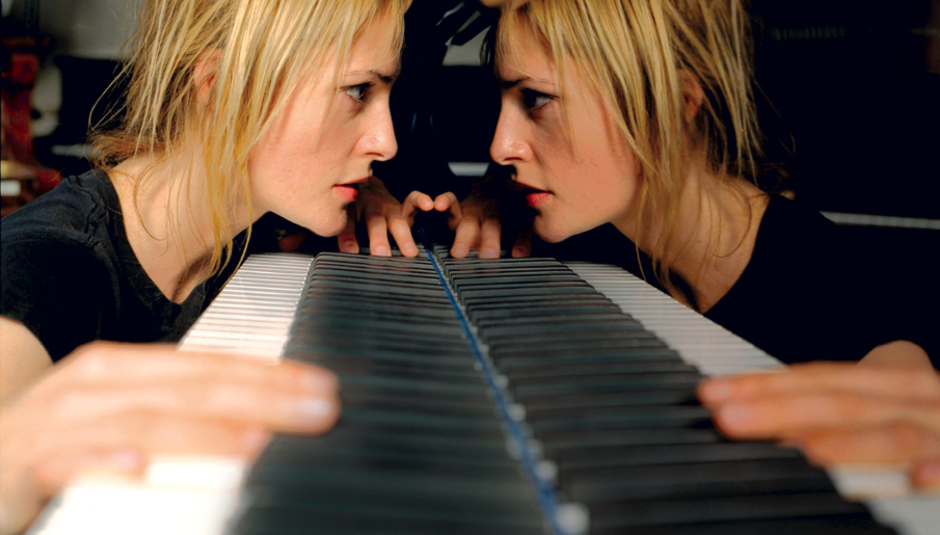 There's something about a gentle piano and a voice, cracked with pain but flecked with an almost otherworldly resonance that gets me. I sort of 'wibble' - there's no other word for it. This is what happens when a song hits me (it really doesn't feel like a kiss). Often, it is as if some bastard caught my loneliness in a butterfly net, made it a nice cup of tea and held up a photograph to remind it that this anchoring sense of dread is ok, and that it's not alone.

Other than that, I still can't explain the mixture of comfort and dizziness that occurs when a certain song dives into me. Of course, I can begin to explain that when a whirling hammond organ purrs into the distance just as a lyric burrows into my whisky marinated mind that descriptive metaphors bounce around my synapses like a pinball. I can remark that it feels 'good' and 'humbling' but it also is likely to make me wibble. When that feeling is gone, there's always another wibble waiting to come along. Over the years, I have developed a wibble warning system. Whenever that first flash of violin starts teasing on the horizon patiently waiting to steal the thunder of a lone banjo, I try to compose myself. If anyone asks, it's just the wind that makes me cry.

I wish I had the words to make these songs I've compiled on the below playlist make more sense. I think, possibly, if that sense of understanding was within reach I wouldn't have picked up a pen or started bashing a keyboard in the first place. The mystery of some music and what it does to me (possibly it makes you wibble too?) is ironically the only definable thing that after 10 years of doing DiS, still has me in a dumb-founded state of joy and awe. And in many cases, when a song comes along and this happens, I have to share the song by email or tweet or in extreme cases, by putting a record out on my label, in the hope that the song does this wibbling thing to someone else on that six outta ten day when they needed it the most.

Obviously, these feelings can be felt with all sorts of music but it's particularly powerful in the stripped down world of solo artistes. Usually it's singer-songwriters but just as often they're lone ladies with loop pedals and laptops or the drunk dictators of band-de-plumes. When putting together this, ahem, 10 song playlist of my favourite songs by solo artists from the past 10 years, I got somewhat carried away. There was no way I could pick a mere 10 songs. My shortlist was over 100 tracks. This first playlist is by far the longest of the three I'm sharing this week but there was no other way of separating music which isn't exactly definable by any generic genre tags and there was too much that I couldn't leave off.

Putting this playlist together I was reminded that the poignancy of many of these songs comes from that single-mindedness that only an individual with something to say or a deep well of emotion to share, is capable of. Love, hate and the precarious life vs. death battle looms large. For some of the artists on this playlist, life was too much and they didn't make it to 2010 but don't let that put you off because there's a human spirit in all of these songs (save for the few that are that little bit alien or divorced from any known reality). It's a spirit that will lift you on your best days and cradle you on your worst.

In a decade that has seen the world come 'online' and form tribes and become one globalized mass sipping Starbucks in our American Apparel t-shirts, these frustrated men and visionary women, with their quirks, quips and hello-i'm-a-human-being-ness will quite likely stop you in your tracks. For all the aggregation of humanity and talk of peer-to-peer (or person to person), it's important to hone in on the lone voices, the outsiders and the kings amongst mobs of men. The web may have bought us together with like-minded people but in doing so we risk forgetting what true loneliness feels like. A "friend" is two mouse-clicks away but do they connect in the same way as a song that nails it? At my most future-fearing, I worry that as we become increasingly atomised, it's these so-called specs of humanity, on a planet drifting in space, will be lost as the pixelated heap of people, piling together in a bland grey heap, will never truly be caught in the whirl of a confessional chorus or a single line that empathises exactly with the emotion you couldn't put your finger on. It's the honesty of it all that gets me, sometimes but it's the ambivalence that excites me, that this song doing whatever it's doing to me, wasn't made for me personally but fits like it was.

That "I don't play well with others" line from Empire Records sums up a lot of the mindset that led these individuals to put themselves in a room and press record, without so much as a thought what you or I or the guy they asked to play drums might think. These are human beings, unfettered by the compromise of others. This is their world within which you have permission to swim. This is their scratched heart, on a plate, for you. Just don't devour it all.

Check back tomorrow for my favourite electronic individuals of the past 10 years.

Above photo of Emily Haines by Wendy Lynch from Under the Radar.