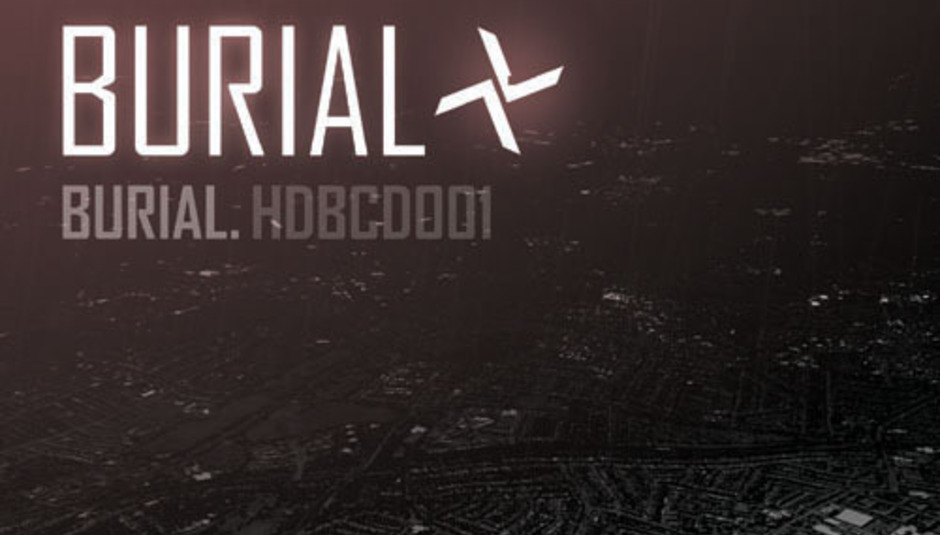 As part of our 10-week “DiS is 10!” celebration, we’ve asked 50 of our favourite people to tell us about one of their favourite albums of the past 10 years. This is not a best or "top" anything list, merely a list of individuals sharing one of their personal highlights. Here, DiS contributor and editor of our recent week of content dedicated to Dubstep (compiled here) Rory Gibb shares his choice... “Me and him, we’re from different, ancient tribes - now we’re both almost extinct. Sometimes you gotta stick with the ancient ways. Old school ways. You understand me?” [Burial - ‘Gutted’]

Spin the record back fifteen years or so, to the heyday of London’s pirate stations: the airwaves are alive with the crackle of illicit transmissions, beamed from identikit council blocks and blazing down from the heavens into cars and bedrooms across the capital. Once you’re locked in you find yourself confronted with an anonymous blitz of sound and energy, the incandescent warmth of Friday or Saturday night’s rave condensed into an endless stream of chopped ‘n’ sliced breaks, frenetic MC chat, swung garage beats and excitable call-ins. There’s a feeling of romance there; you're connected to an invisible network of fellow listeners, hearing new tracks you might never hear again - or might only ever encounter once or twice, in a darkened rave or in your mate’s car, never knowing the producer that’s pieced them together.

Then shift forward to 2006, where the internet’s information overload has diminished that sense of local involvement, of music for music’s sake, to Hyperdub’s first album release – a little record by an unknown producer calling himself Burial. A hazy wash of static crackle, indistinct percussion and sub-bass that sends heat prickling across the skin like the air in a tube station, it instantly sends the mind spiralling back to the “old school ways” that ‘Gutted’ calls upon. As a complete entity, from the sonar-scan bleeps of opener ‘Distant Lights’ to the thick dancefloor heft of ‘Pirates’, it feels like a love letter to the illegal stations, a lament for something partially lost but still glowing in the memories of those who were there.

Like all the records that etch themselves indelibly into the fabric of your consciousness, Burial is strongly attached to a very specific set of personal circumstances – the years immediately following a move away from London; the emotions associated with missing it not simply as home, but as a city and cultural hub in its own right; the beginning of an immersion into a world of music still tantalisingly unfamiliar. Alongside Kode9 and the Spaceape’s mercurial _Memories Of The Future_ album, which masked its heart beneath a cool chrome exterior, it was a gateway drug, and led down the rabbit hole towards dubstep and its predecessors. But Burial’s music stands separate from the genre it’s most closely identified with. It’s still ‘London’ in every way, but instead of pointing inwards to the dystopian, desolate headspace associated with the city’s faceless nature, or outward, towards the group energy of a club crowd, it searches for joy in hidden corners. The rippling synth figure that rears up from the broken depths of ‘U Hurt Me’ (surely one of the decade’s finest pieces of music, regardless of genre) evokes sadness and loneliness, sure, but it’s also a sound of hope and connection. And while the steppers’ shuffle of ‘Southern Comfort’ bristles with menace, its muffled horns hint at something greater beyond urban isolation, tracing along the unseen lines that bind the city’s disparate communities together.

So that’s perhaps why Burial was so easy to fall in love with – only in the last few months before I moved away from London did I truly begin to appreciate what it really represented, beyond my own well-worn circles. For reasons difficult to individually pinpoint, it still exerts a hypnotic pull like no other place.

In order to retain its ties to its lineage and purpose, electronic dance music needs to remain, at its core, functional. It’s music stripped down to the barest essentials and rebuilt from the ground up with a specific intent in mind, with rhythm at its core. That’s not to say it can’t be complex; the level of compositional sophistication within a great deal of dance music is jawdropping. But the need to impact physically upon the human body in very specific ways ensures experimentation always remains anchored to certain traits – the way a garage beat flexes, supple, elastic and organic, is as human and as compulsive as the heartbeat thud of Berlin’s dub techno, and both ultimately sprung from the same place. UK-borne dance music is all about sensation and physicality – rushin’ to hardcore, half-steppin’ to jungle, two-steppin’ to garage, bathing in dubstep’s oceanic wash of sub-bass – and participation ceases to be an option: this ain’t music you stand passively by and observe with a detached eye.

So when attempting to pin down why it’s so easy to become hopelessly drawn into the miniature world of Burial’s debut, it’s surprisingly difficult to extract a single strand from the web. But what immediately captures the attention, even now, is how it stands both within and entirely separate from the continuum of UK dance music that leads back through two-step, garage, jungle, ‘ardkore. Burial’s music retains the nuum’s economy of form and function – it necessitates the same sort of physical involvement as its more club oriented cousins - but co-opts it for a different purpose entirely. Save a scant few tracks, you’d struggle to call it music for the club; it’s a different story, but told in the same language. Four years on, an entirely new group of young producers have been heavily influenced by its sound, but when it first emerged it sounded like literally nothing else out there: it stood as apart from the earlier generation of dubstep producers as they did from the two-step that first informed their sound.

So while it was next to impossible to choose between this and its follow-up, the spooked two- step trip of Untrue, Burial finds itself out just on top by virtue of its spectral, alien beauty. There are still very few musicians out there who can put together music as simple as this, with as much emotional weight. Untrue is a post-club album, a journey home still in thrall to the barely gone pleasures of a night that’s not yet vanished below the horizon; Burial is an album made up of memories, both personal and collective, founded on respect for the pirate lineage that led to its creation. It cries out for human interaction while simultaneously shunning it in favour of a solo ride on a London night bus, remaining aloof, viewing the chaos of the big city through its scuffed plastic windows. It’s a seemingly irresolvable paradox, but that exact contradictory tension lends it an otherworldly grace.