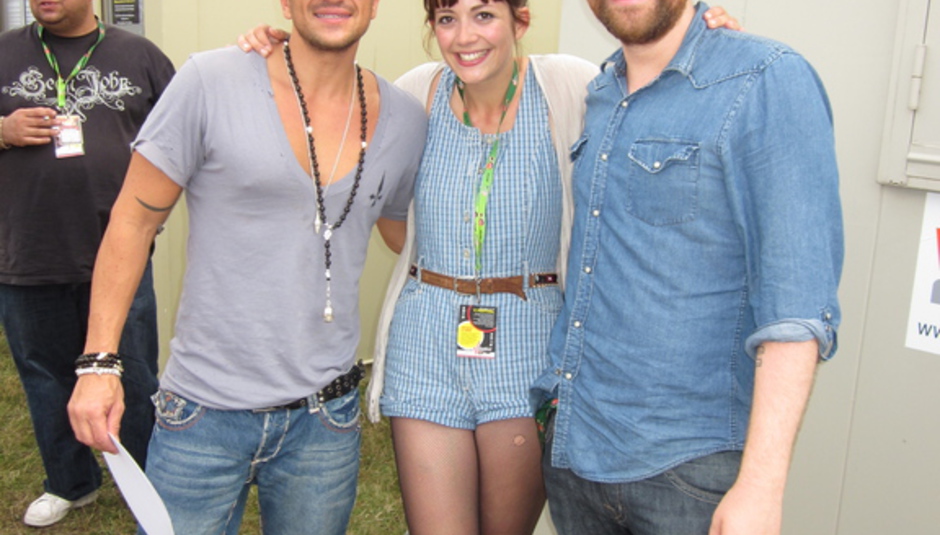 Scott Hutchison from Frightened Rabbit: A Postcard from V Festival

Scott Hutchison from Frightened Rabbit: A Postcard from V Festival

Scott Hutchison from Frightened Rabbit sent us a postcard from his celebrity packed adventures at V Festival last weekend...

As we roll up behind the main stage in our blue-and-mud coloured van, Pixie Lott is doing karaoke to thousands of happy young revellers. This is definitely the V Festival. ‘Who is easy like Sunday morning?’ she yells. The crowd confirm that they are indeed easy, with a collective roar. ‘And who likes heroin?’ screams Pixie, in a somewhat unexpected move which is met with a stony silence, aside from a few lazy claps. This might be better than I thought…

It’s certainly fair to say we immediately feel a little out of place here. Driving around to find parking in the backstage area feels a bit like going on a Crap Celebrity Safari. ‘Ooooh look! There’s the one who’s not Alexa Chung from T4! I think I can see Gary Lucy drinking from the water well! Over there! That’s someone from Girls Aloud shitting behind that bush! Is that Bombhead from Hollyoaks rutting a Saturday?’. I am almost expecting Olly Murs to jump up on the windscreen and pull off our wipers, screeching like some kind of coked-up spider monkey. Still, it’s actually part of the fun of this particular festival and, try as I might, I can’t help but inhale with excitement as Mr P. Andre walks past, like, literally, RIGHT THERE. He looks so buff these days. OMGZ!

Anyway, I digress. I’m supposed to be reviewing the music, not the fucking wildlife. Looking at the schedule for the day, we notice to our surprise that Eels are performing - the name glows like a refreshing oasis within the desert of sandy, dehydrated ‘tan-pop’. To do this, we venture into the main arena which immediately feels like entering into the world record attempt to hold the biggest stag and hen party ever. A man walks by wearing a red swimsuit and a pair of pillowy tits, accessorised by a pair of orange Breezers. He is singing Stone Roses songs into the faces of unwitting passers-by. Turns out he is Richard Branson’s receptionist.

Standing in a packed tent, waiting for Eels to come on, I am surprised by their new stage set up. There are at least 5 synthesizers set upon chunky metallic stands and a very comprehensive drum kit, including chimes and maybe bongos. At the front of the stage, there are three mic stands, but no mics. I haven’t seen Eels for a few years, but this feels wrong. Eventually, a backing band arrives on stage. I don’t recognise any of them, but Mark Everett does change the line-up a fair bit… They break into a reasonably faithful intro of ‘Bulls On Parade’. What the fuck? It’s an odd move, but he is well known for being slightly eccentric and… ah for fucksake. Here come The Sugababes. We have come to the wrong stage. The very wrong stage.

When we do find the correct venue, the show is great. Everett is on excellent form and they play new versions of old tunes that sound wonderfully fresh. A highlight comes when ‘E’ introduces his bass player, Mr Kool G. Murderer as ‘Bass Player magazine’s Bassist of the Year 1991’, whilst Kool G. triumphantly holds aloft an impressive looking trophy.

I dip my ear into a few other acts across the weekend, and find myself enjoying a mixture of nostalgia (Skunk Anansie and Madness) lad-rock (Kasabian) and kooky dream-pop (Imogen Heap). And it’s a surprise to find that this is actually a slightly more diverse festival than I had thought, and my initial snorts at it’s commercialism were, if not unfounded, a bit pointless: everyone here is having a whale of a time. On top of this, the two shows we play are great fun. In spite of the modest crowd, the audience is in fine form. Adopting a kind of ‘fuck it’ approach to the whole thing, we end up really enjoying ourselves. Who’d have thunk it?

The glittering highlight of my weekend, however, comes very close to it’s end. Having spent an hour or so plucking up the courage, my girlfriend finally manned-up (more than I could bring myself to) and approached the man himself. Yes. We got our picture taken with Peter Andre.