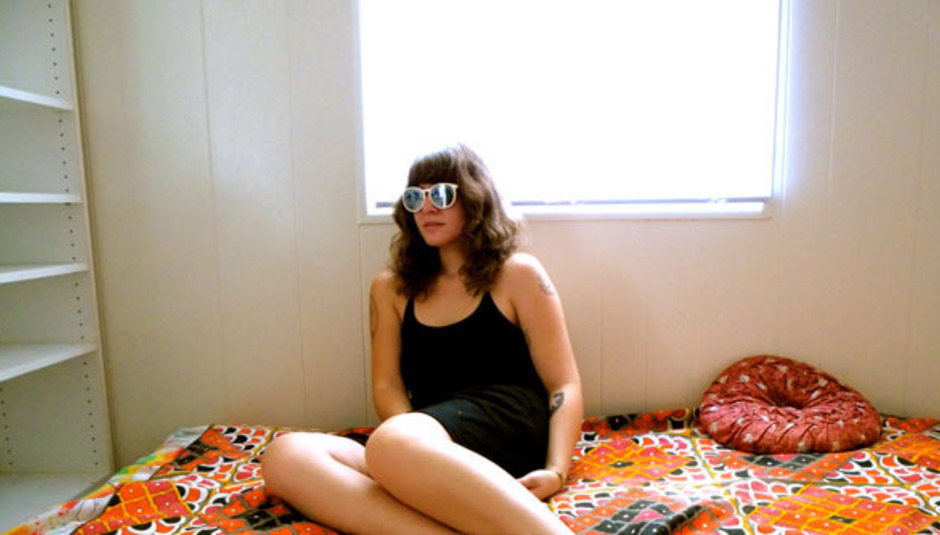 Californian outfit Best Coast are a trio based primarily around the songs of singer/songwriter/all round musician Bethany Cosentino. Having initially co-founded experimental drone outfit Pocahaunted in 2005, Cosentino embarked on something of a drastic change in direction eighteen months or so ago. First of all she recorded some demos on her own, and soon after got together with childhood friend and multi-instrumentalist Bobb Bruno to make the embryonic, sun-kissed version of Best Coast responsible for unleashing the batch of seven-inch singles and EPs last year that brought them to the attention of the wider music industry. They recently became a three-piece earlier this summer, recruiting the services of one-time Vivian Girl and regular touring drummer Ali Koehler on a permanent basis.

Fast forward to summer 2010, and with a well received album Crazy For You in the shops this month not to mention rock and roll boyfriend - fellow no wave songsmith Nathan Williams (aka Wavvves) - in tow, DiS caught up with Ms Cosentino after her recent headline show at London's Cargo the other week (reviewed here). Take it away...

DiS: Your recent show at London's Cargo was your biggest headline slot in the UK so far. How did it go?
Bethany: It was really fun, very hot and sweaty inside but yeah, everyone seemed to enjoy it so hopefully it will be just as cool the next time we come over.

DiS: Do you think UK audiences get what Best Coast are about more than those back home?
Bethany: Hmmm...I don't know whether they get us more or not, but we're pretty excited that people here seem to have gotten into us so quickly. It's such a buzz to be so far away from home and have a bunch of people turn out that know your songs. When we play certain places in America it does get pretty rowdy but it seems to be just as much fun in London.

DiS: It must make you proud hearing people in the audience singing the songs back to you word-for-word, particularly when the album's only just landed in the shops?
Bethany: It does, even if it does feel quite strange. When we played in New York recently before we came over here the record wasn't even out yet people seemed to know all the lyrics. That's when you realise that the record must have leaked on the Internet well in advance. It's definitely surreal though, especially when we go to places where people don't even speak the language. We just played in Portugal and there were a thousand people singing 'When I'm With You' in English which is crazy when you realise it isn't actually their native tongue!

DiS: To say you've only been making music as Best Coast for eighteen months or so you've received a substantial amount of recognition so far, particularly in Europe.
Bethany: I wasn't expecting anything like this at all! None of us ever saw this coming in the first place let alone this quickly.

DiS: It was initially a solo project for you, right? What made you involve Bobb and then Ali at a later date?
Bethany: It was never really my intention for Best Coast to be a solo project. It was something that I started and I asked Bobb to be involved at a very early stage. The first cassette tape I ever did which was put out on a really small label called Blackest Rainbow was solo, but the only reason I did that was because that label put out more psychedelic lo-fi sounding stuff whereas the songs Bobb and I had started recording didn't really fit in with that kind of sound. I was never feeling Best Coast as being me on my own. It was just that the songs themselves have always been written by me.

DiS: What about Ali? What does she bring to the band and was it an easy decision for her to leave the Vivian Girls and join Best Coast full time?
Bethany: She had come on tour with us a couple of times, so when the Vivian Girls were talking about taking a break from making music Ali made the decision to join us. I think she brings a lot of fun and personality to the band; we've played with other drummers before and haven't really gotten along with any of them whereas Ali is our friend and a great drummer so the fit for us and her is pretty mutual.

DiS: While it would be fair to say that the production methods have changed between your early seven inch singles and Crazy For You, would you say your approach to songwriting has also changed significantly over time?
Bethany: I think with time I've been more exposed to different methods both from a production and songwriting perspective. I'm still learning about writing more complex songs on the guitar; most of my earlier songs were literally just the same two chords repeated over and over again! As time's progressed, I've started to use more chords and experiment with melody a little more so I guess it's not so much a case of my songwriting style having changed, but more a case of it having grown.

DiS: Do you see Best Coast's sound becoming more expansive in the future rather than adopting the lo-fi approach of those early singles?
Bethany: I never really wanted the records to sound especially lo-fi. I just think that when you have the facilities at your disposal like we did when we were recording the album, it makes sense to try and go for the richest sound possible. After all, why would you want any record to sound hazy and fuzzily distorted if it can sound clean and pristine? It's not that I'm against music that's made in that kind of way but I do think as a band we're more comfortable with a more polished finish than we were a year ago.

DiS: Which songs on the album would rank as your proudest achievements?
Bethany: Definitely 'Boyfriend'. I think as the lead single and opening track off the record it pretty much defines our band at this present moment in time. It's also a fun song to play live and even the recording process brings back happy memories. 'The End' is another one we're all quite passionate about. It was inspired by the Everly Brothers' 'Cathy's Clown' which is one of my favourite songs of all time. I guess 'Crazy For You', the title track, would be another of my favourites, if only because its the kind of song I want to continue to be able to write in the future.

DiS: None of the songs from your early singles are featured on the album. Was it a conscious decision to make an entirely clean break with this record?
Bethany: Yeah. I just didn't see the point in putting out an album that would have been little more than a compilation of songs we've already put out, and I didn't want to go in and re-record those songs because I figured they already have a meaning to us and our fans, so why go in and re-create somebody's perception of your song? I don't think those songs would work well with any of the songs on the album anyway, whereas the twelve songs on Crazy For You have an almost conceptual feel about them.

DiS: At the same time, if you could turn the clock back and change anything about the way those earlier songs were recorded, what would it be?
Bethany: We do play 'Something In The Way' a lot different to how it was recorded. Apart from that, I really wouldn't change a thing, simply because we chose for those records to sound the way they did, and they're like documents of a certain time and place.

DiS: What made you change direction musically with Best Coast compared to what you were doing previously with Pocahaunted?
Bethany: Well, I was never really a fan of any of the music we made as Pocahaunted. I've never listened to drone or experimental noise music at all. It was just a project that I got into with a friend at the time. It was similar to Best Coast in the way that we got popular fairly quickly and it all seemed to happen really fast, yet at the same time it was never anything more than a hobby for me. It was fun for a while, but my true roots in songwriting have always been in pop music so when I left Pocahaunted I decided that my next band would be about who I am and what I listen to.

DiS: You've already mentioned The Everly Brothers, but if you could work with any artist past or present who would it be?
Bethany: I guess that would have to be Frankie Valli. I'm a huge fan and when we were on tour in the States recently I listened to an anthology of him and his band The Four Seasons every single day! There are around fifty songs on there and they're all so great, the melodies, the harmonies, everything.

DiS: You've already had your music featured on a Nike website. Is there any product or corporation you wouldn't allow to use your music, if the option was there?
Bethany: I don't really know how to answer that question. We're very open to that kind of thing because of the extra exposure it gives our music, but I guess if some company whose products we didn't support were to ask us we'd refuse. We're not opposed to advertising most products though and that's why I chose to do the Nike/Converse thing because more people may find out about our band that never heard us before and in the end it is about introducing more people to your music so I think that whole brand placement stuff can be of great benefit to a band like Best Coast.

DiS: What does the future hold for Best Coast?
Bethany: We're going to be touring pretty much non-stop for the next year, although we do have the rest of this month off so I plan to use that time writing new songs. I've no idea when we'll be able to start recording though, probably some time in the early part of next year.

DiS: Finally, Drowned In Sound celebrates its 10th birthday in October. What is your favourite record of the past ten years and if there's any band you could be or have been in, who would you choose?
Bethany: Wow that is really difficult! For my favourite album I would have to say Teen Dream by Beach House. I honestly think it is the best record I've ever heard. That's an album I know I'll be listening to for a very long time. For the band I'd most want to be in I'd probably say Destiny's Child, because that would mean I grew up with Beyonce!