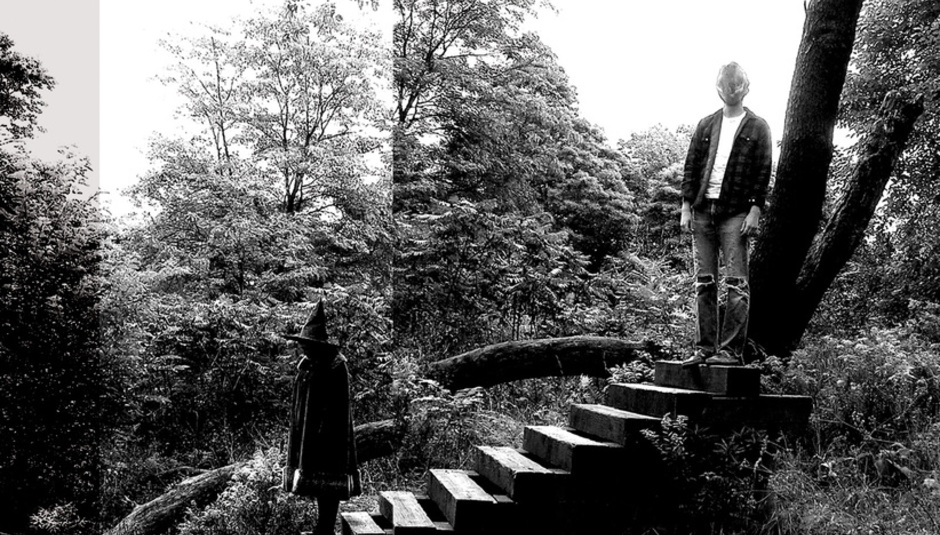 This week’s singles are brought to you by the letter 't' for tired and 'w' for weary. Sometimes being all ruined works though; all those frayed nerve endings and shaken vitals make for a curiously vulnerable listening experience. That’s my excuse, anyhoo.

Maybe it’s just me, but when I listened to ‘Demon Host’ it did not take very long for the images to start blossoming, and very alarming they were too. Because though it begins all five-yolk omelette [as in, OVER EGGED, doyousee], and reminds you of Antony & his Johnsons, I would be a literal simpleton to stop there and not listen harder. Even if it is perilous, even if this song has the extraordinary air of a shady cabin in the woods, where your only company is a red-eyed, strumming Not Right. And he has been awaiting your arrival; he has sharpened his axe, just for you. You see, ‘Demon Host’ is by far the most intimate, squirmy and haunting thing this week, and it is also deeply affecting. And right at the end - just after Taylor Kirk has sung ‘I have seen the demon host’ (and Lawks, do you ever believe him); and right after that, when he quite literally sings ‘Wooooo Hooooooo’ like an actual ghost, there follows what are surely forty five of the most beautiful seconds I have heard recorded in quite some time. It’s so wonderful, I giggled in fear, it tingles.

The Count And Sinden Feat. Mystery Jets - ‘After Dark’ (Domino)

After Dark is essentially about booty calls. Or at the very least, it is about people who think it is acceptable to pester others telephonically at way past their bedtime. And I am pleased they have released it - partly because like most things involving the delightfully unpredictable Mystery Jets, it is a found fiver of a song that barrels along and is almost impossible to dislike. I am also happy because it gives me an excuse to expound a theory - and it is one of my favorites, concerning both lost love and inelegant foodstuffs. I call it a ‘Pasty Moment’. And I am convinced we are all in need of one if we are to get over those scoundrels who break our hearts.

So here is the thing. I had a friend who, years after having his Old Beater trampled on by a bad lady, still held a candle; still kept it shielded with his big hands, to the point that no other woman (however magnificent) stood a chance. And then one day, he went to Camden and there she was, stood outside the tube. But better than that, because she was midway through shoving the greasiest, filthiest Cornish Pasty into her facehole with such grotesque abandon that there was mince all over her fizzog. And of course, that was all it took, one rank image and – poof! – how did her pedestal crumble; it had been sand all along. He rang me shortly after and said; ‘Wendy, she looked ACKFING DISGUSTING. I win, I win, I WIN I WIN I WIN.’ The reason I mention this, is that a) we could all do with a moment like this eventually (though I admit, they are hard to engineer). But also because b) I once went out with someone who rang me ‘After Dark’. And because they were a bit annoying, and because they were eating a pie in between asking to ‘pop round’ [I mean, I ASK YOU], I managed to combine a Pasty Moment and finally dumping him by just shouting ‘OH, WILL YOU JUST GO AND EAT YOUR PIE’ down the blower. I won't lie, it felt good.

The great thing about a single like 'Boyfriend' is that it is an utter joy whether you listen with a straight ear or not. At face value, it is the song as feminine wail; but of course, the more cynical can simply read it as parody - with all its icky talk of wanting to ‘sit and watch the sun rise, and gaze into each other's eyes'. I think the reason this works so well has something to do with the times in which we now live, and the fact that one does not so much wait by the phone (as Best Coast have it) as wait by all one’s thrimpty million internets, for some sign that the pash in question is interested. And how our increased online intimacy makes it doubly impossible to tell if what you are doing is Proper Flirting, or just being thoroughly modern, Internet Fwends. All of this means that ‘Boyfriend’ sounds like it hails from an impossibly simple, bygone romantic age - where presumably if someone was interested they would either drag you off by your ponytail after spearing a tusked mammal, or even you know, (whatever next) tell you to your actual face.

‘Smoke’ begins like a lot of my favourite records; which is to say that it sounds like a rather dischordant school orchestra that has been smoking behind the art terrapins when it should have been at Practice. I mean, the whole affair is all rather Sufjan, yes, but I only mention this because I feel I have to expend some of this column on actually DESCRIBING THE RECORDS for the sticklers [Spare me, no really, please do]. In any event, Bill and his Big Bulls are not annoying shadow-dwelling travellers, they have a charm all their own. Mostly it is the repetitive jazzy bits of syncopation; mostly it is because I am a sucker for minor chords; but also there is a lovely bit at the end where they all sing ‘Suuuuuuuuuuun!’. At least I think it’s ‘sun’, it might be ‘sign’. It doesn’t matter because this single really is all charm, no two ways about it.

Though the Bike Riding System Of Singles Appreciation has now been scientifically established as the best way of listening to music and then writing about it, I also have a soft spot for throwing myself and my weekly playlist into humdrum situations, to see if the music can liven it up. Such a contrast often occurs if I take each week’s mentalisms to the supermarket, and perhaps it was the racks of Back to School stationery reminding me of youth, but when I listened to ‘Echoes’ all I could think of was Ned’s Atomic Dustbin. And the sort of indie exemplified by ‘Echoes’ - which, if I am completely honest, strikes me as the tiniest bit Grebo.** With that in mind - and though it goes against all of my womanly nature to say this (because Dog only knows, Grebo was abominable) I rather like it.

‘Nothing You Can Do About It’ is in part about getting older. And though I do not believe in regret, may I take this opportunity to patronize all you younglings and tell you to bloody well get on with it, we have made a complete mess and I am afraid it is up to you to shovel the mess into the nearest bin and start again, START AGAIN. This also has some neat lyrics about cheating at Scrabble - though I will admit I am the sort of horror who thinks that anyone who gets away with cheating is automatically the cleverest and therefore a bit brilliant. Also in this category: anyone who calls someone an unct within the first ten minutes of RISK - and on the same subject, anyone who shows their true, terrifying colours and asks (on being explained the rules of said Board Game Of World Domination) ‘What happens if, when I’ve completed my mission, I want to KEEP GOING AND GET MORE COUNTRIES?’. Bad and fascistic board gamers of the world, I love you.

I am not sure how Holy Fuck have got away with writing inordinately funky but largely directionless jams, but I am glad they have. This has the best bass of the week by miles and is really quite utter.

I suspect the reason this all sounds so darling is because it is recorded in that peculiarly glassy way, with every pluck up absurdly high in the mix. Essentially every note here sounds like it is being played on an icicle.

Here is Nic Offer with a song in which he sings about how sometimes people – as in you, YOU – deserve heartbreak. What a sexy rotter, though of course ‘Most Certain Sure’ is still very them and therefore very great.

Sleeping Bags ‘Phony Checks’ is the highlight here, being an impressively confident one minute and forty eight seconds of slight, Replacements-style Summery fuzz.

‘See Spaces’ is pretty shrill and sounds rather like Crystal Castles might do if they drank more tea and stopped getting their pants in a twist about every bloody thing on the planet. It’s not going to change your life - but hardly anything ever does. So you know, don’t be greedy.

What Hjaltalin are doing on this single rather reminds me of Elbow, but with more twinkle. Pretty adorable, ‘Sweet Impressions’ has some delightfully quivery strings anawl. Some wonderfully threatening techno here. More info on this bit of the internet.

Kele - ‘Everything You Wanted’ (Wichita / Polydor)

Dead Confederate - ‘Giving It All Away’ (Kartel Records)

Pete Lawrie - ‘All That We Keep’ (Island)

** In case you were wondering, and even if you are not, Grebo is - by quite some distance - the WORST GENRE EVER. Even worse than ‘Prog’, imagine that!

Wendy is on Twitter, here, waffling on about this and that.