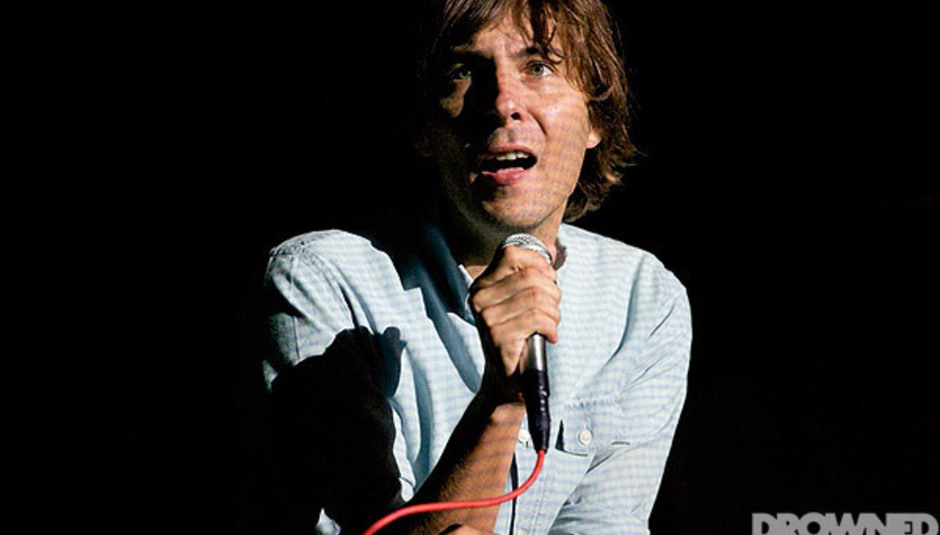 Festivals are all about ‘moments’. Always. A festival moment is hard to exactly define, but it’s something that is clearly only possible in the unique environment of a music festival. My first ever festival moment was watching a drunk guy dancing to Ian Brown, and then proceeding to drop his trousers and urinate vigourously, scattering all nearby onlookers with aplomb. But that’s not to say that festival moments are exclusively unsavoury memories: off the top of my head, I remember watching Radiohead encore with ‘Creep’ with the rain gently dusting the heads of a rapt audience bellowing along to every word. Or watching Fuck Buttons play their second ‘secret’ show of the weekend on a Sunday night at ATP as the same punters from earlier in the weekend went even more apeshit than the first time round at every crescendo and buzz laden drop.

The point I’m labouring towards is that a festival environment makes people behave in a certain inimitable and slightly magical way, once they’re tagged with a plastic band and simmered gently in a muddy field or creaking holiday camp for a few days. The best thing about the fourth edition of Field Day, therefore, is that it surprisingly delivers a one-day event with wafts and aromas of this intangible component: festivalness. Field Day always had style and potential (just look at those lineups), but this edition had a little more than that – soul, if you will – and should readily convince any who still feel a tinge of bitterness for years gone by.

That said, there’s an inauspicious start to proceedings. I’ve gleefully managed to drag a foreign companion halfway across a mis-signposted Victoria park in search of the media entrance before realising that this being Field Day, confused directions is probably the least I can expect. Can’t complain about the security, at least: my overzealously affixed gold band grants me a cursory check which consists of being questioned on the amount of narcotics hidden under my clothes (disappointingly I am unprepared and cannot give the incorrect answer to this question) before being ushered through. Ticket-holding foreign companion, however, gets the full treatment of an English Summer Festival attendee: wands, searches and patdowns. Nice to see that the coalition government has heralded in a new liberal atmosphere already.

Once inside, Flower-Corsano Duo’s cacophonic pyschedelia is doubtless one of the rudest musical awakenings possible. Watching Corsano pull out his usual pyrotechnics (the seamless dropping of a third drumstick from his mouth straight into his clattering drumkit assault is so stylish as to be missed in the blink of an eye: circus tricks this ain’t) as Mick Flower hunches, stooge-like over his what-the-hell-instrument-is-that-anyway, a groggy feeling descends. Hypnotic the 60 mile an hour set might be, but ill-timed is the enduring feeling as we head for our first beer of the day, not feeling quite as engaged or enthusiastic as might be expected.

A short discussion on whether the beer counts as morning beer isn’t worth recounting (aside from the revelatory discovery that until lunch has been consumed, it cannot be considered afternoon) but Mount Kimbie’s set is easily worth a hundred words. Although an infuriatingly tiny Blogger’s Delight Stage (which resembles a cattle market rather than a tent for most of the day) means that I’m not entirely sure when their set starts (maybe that’s the newly christened ‘morning’ beer at work), I’m definitely certain of its skullscrewing brilliance when I wake up in the middle of it. Whilst the duo might have been better suited to a twilight set, their murky, ephemeral electronica is moulded with twinkling guitar and thumping drumpads into a set that rarely strays from blistering. The effect on my ears is that of a sun slowly rising, shimmering gently and hazily before bursting into glorious light. Goddamned brilliant.

A brief lull in interesting acts gives time to soak up the atmosphere, and chalk an abysmal performance in the male vs female tug of war contest to the pity felt for the poor clown who wins a guitar by eating twenty meringues (so he gets to carry a guitar around all day in slowly developing heat, and feel really sick? – what a winner). Pimms O’clock is decreed and a bad Pharoahe Monche joke made about Egyptian Hip Hop (who turn out to sound infuriatingly like Foals. If Foals were terrible.) The sun comes out. Life is good. Life is about to get a lot better. Because the only thing worth missing a Joker set for; DåM-FunK, is in town, and he’s about to lay his claim to best act of the festival on the line. My face becomes a freakish mask of grin on seeing Damon Riddick pimproll his way on stage clutching a keytar, and whilst the Blogger’s Delight tent empties somewhat for the only time that day, those who remain know what’s about to follow. A set of boundless, endlessly smooth groove follows, from the hilariously out of place ‘Killdat aka Killdatmuthaf**ka’ to a leg-wettingly silky ‘I Wanna Thank You (For Steppin’ Into My Life)’ is backed up ably by Master Blazter, whose drummer’s way around a drum n bass break is rivalled only by his exquisite choice of accessories. It’s at once refreshingly serious and perfectly tongue-in-cheek, this bouncin’, rollin’, struttin’ eighties funk. As his band literally break it down, Riddick soloing up and down his ridiculous instrument, there’s a beautiful line trodden between brilliant and ridiculous. Which is better than most of the ridiculously attired vanguard of London’s sartorial elite can manage today.

Hudson Mohawke proves a bridge too far for Blogger’s Delight, and his warbling chirruping set would be obnoxiously brilliant, if only I could move any part of my body besides my neck. Thus, out of the sweat, and into the light, for Hypnotic Brass Ensemble, who predictably (after some awkward corporate shout-outs), tear the main stage a new one, and convince us that every hip hop act needs a full brass band to work live. The co-ordinated call and response to ‘Party Started’ is gleefully foreseeable, but it’s the band’s swagger and energy which ices their clear musical prowess perfectly. Even if their shirtless antics make us feel uncomfortable. Like a Boyz II Men video.

What little is caught of Esben & the Witch unfortunately isn’t quite enough, barging somewhat drunkenly in midway through a short set to find a guitarist writhing around the stage. Next time guys, I promise. Similarly, snatches of Atlas Sound are predictably frail and spindly, but fail to distract on a gut-led mission which culminates in some unbelievably fiery fishcakes.

Yet even a burning tongue can’t dullen an incredible set from Dan Snaith’s Caribou project. Dressed all in white (like a geeky Boyz II Men) the band are tightly curled onstage around Snaith’s keyboard ensemble, and play their way through the entirety of the liquid dance grooves of latest album Swim accompanied by scenes of unprecedented appreciation. By the time they get to the mantra-like ‘Sun’, a nicely toasted early evening crowd is chanting it’s approval to each and every thunderous utterance of the word ‘sun’, worshipping the very last rays over Victoria Park. It’s a gloriously, and uniquely festival-esque, moment.

The same can be said of the final few hours of madly dashing around a bill which seems suddenly overly full. The only mildly diverting creaking synth pyschedelia of Silver Apples sans live drummer is replaced by the all out freak out of James Holden, and I barely manage to step over the girl spewing black vomit out of her mouth staggering out of the cavernous bacchanalian party that the Bugged Out tent seems to have become. Factory Floor are disappointingly late and thus missed entirely, as an ill-thought out pledge to watch Phoenix takes precedence. When the opening strains of ‘Lisztomania’ ring out across the park, a mad rush to the main stage ensues in which I spend a hazy three minutes engaged in that most festival-like of pursuits: drunkenly blundering through the crowd looking for someone. Whilst perhaps the juddering techno of Moderat (or the tardy post-punk jolting of Factory Floor) might be more my style, the French have come here with more firepower than has been seen since the Battle of Trafalgar. Their global warming inducing lighting rig is accompanied by all manner of swooning, almost instantaneously anthemic melodies. While the finale of ‘1901’ is a glorious piece of festival-sized showmanship that proves them worthy headliners, it’s the sheer number of crowd pleasing tracks they conjure up which indents itself upon an alcohol sodden brain. One trick stallions, rather than one trick ponies, seems a most appropriate ruling at the time. Though I’m not sure it makes any sense now.

And as the echoes of Moderat’s purportedly awe-inspiring headline set calls time on Field Day 2010, there’s precious little to offer to the organisers other than a comradely arm around the shoulder and a sip on the remnants of that last can of beer. In the end, the only gripe is that the bill is too full and crammed together to see everything (well, that, and the ludicrous size of the Blogger’s Delight tent). What is missed is a list worthy of inclusion alone: Joker dropping Dead Prez, Matthew Herbert climbing a ladder to play a keyboard, Pantha Du Prince reducing grown men to tears by dropping ‘Saturn Strobe’, The Fall being The Fall… et cetera. But that doesn’t matter, because I feel like I’ve vitally managed maintained the perfect level of festival/business drunk all day, as I drift off to sleep on the central line, comfortingly aware that no-one’s going to have pissed on my tent tonight