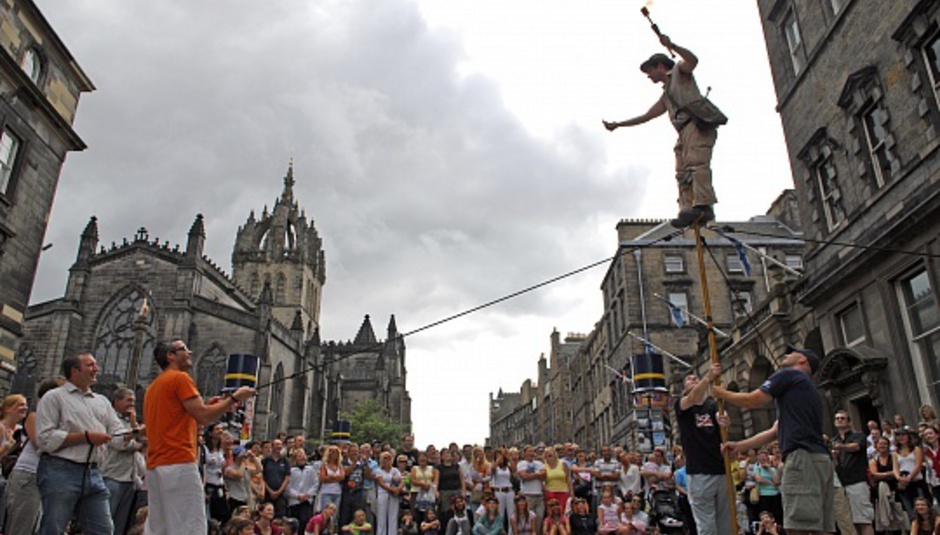 Most people reading anything Scottish and arts-related in August are probably sick to the eye teeth of the fact that the one and only thing anyone seems to talk about at this point is the Edinburgh bloody Festival. Well I live in Edinburgh and, frankly, if I have to suffer this shit, then so do you.

I am, I think it’s fair to say, an absolutely classic Festival Hypocrite. I piss and moan about it with all the relish of the classic British whinge but deep down, in amongst the maelstrom of Home Counties trust fund babies showcasing their cringeworthily zany antics up and down the streets of Edinburgh, I will happily admit that there is some amazing stuff talking place in this city in the month of August.

First off, for the more commercially minded amongst us, there is the Edge Festival. To be honest though, a few flagship gigs by the likes of Eels, Modest Mouse, The Low Anthem and Beirut aside, I think the lineup is pretty thin this year. Mark Lanegan, Harlem and the Besnard Lakes are also in town though, which is good news. And at Sneaky Pete’s Pantha du Prince are being supported by the Brothers Grimm, who are the graphic designers who tend to do the artwork for our label’s releases, so God knows if the can play as well as they can draw!

From a musical perspective, however, the Festival can be a fickle mistress for local musical enterprises. DIY music enterprises find it nigh on impossible to advertise in the face of the barrage of publicity material which carpets, wallpapers and rains down upon the city in dizzying quantities throughout August, so we tend to rely on the bigger promoters to make an effort to mix local talent with the bigger, more glamorous names they are shipping in from outside. That can be a bit of a lottery though; in the years I’ve been here there have been brilliant years and awful years for local bands.

In 2010 the Electric Circus is making a tremendous effort to give Scottish music a platform, booking talented locals from Edinburgh (FOUND, Withered Hand, Stanley Odd) and Glasgow (Admiral Fallow, Mitchell Museum, The Phantom Band). At the same time, the larger bands like We Were Promised Jetpacks and Broken Records are playing in the newly re-opened Liquid Rooms.

Before burning down two years ago The Liquid Rooms was one of the best venues in Edinburgh and, at about six hundred capacity, one of the few capable of attracting decent sized bands to the city, so it’s good to see it re-opening at last. Apparently the Sensational Alex Harvey Band, who were onstage at the time the fire started in a neighbouring Indian restaurant, have only just had their equipment removed from the stage, after two years standing lonely in the dark of an abandoned venue, smoke damaged and useless.

As I said, the local music scene is very sporadically represented in the Festival schedule. So in 2008, after a couple of particularly barren years, two local promoters - Tracer Trails and The Gentle Invasion - decided they would bloody well do something about it. They booked the hall at the back of an old church and put on about a dozen gigs featuring almost entirely local underground talent.

Far from being the under-attended haven for the curmudgeonly and the reclusive which they kind of suspected it might be, almost every gig was sold out, proving that even though we sulk about it, native Edinburghers do indeed take an active interest in the Festival, we just frequently pretend that we don’t.

Anyhow, last year, instead of several gigs Retreat took the form of one great big all-dayer, held in the ramshackle but atmospheric surroundings of the Bristo Hall. In 2010 they have booked Pilrig St. Paul’s church on the 28th and 29th of August for a weekend of the best underground music in the city. A weekend which caresses your ears with great tenderness whilst simultaneously beating your liver to within an inch of its life.

At Retreat as well as the more established Edinburgh bands such as eagleowl, Withered Hand and Meursault, the more esoteric ones such as Wounded Knee and 7VWWVW (‘Mammal’ see, get it, get it?), and the lesser known ones such as Skeleton Bob and The Douglas Firs, both relations of Jesus H. Foxx, there are two bands to whom I will be paying particular attention.

The first one is Benni Hemm Hemm, an Icelandic gentleman who is now a resident in Edinburgh, and whose music seems to fit so well within the city that you could almost forget that the UK government managed to piss off his entire country by abusing terrorist legislation to pretty much seize all the nation’s UK assets. So what though, eh, at least we get to keep Benni. After he’s lived in Edinburgh for about two years now, it has shamefully taken me until the release of his recent and utterly gorgeous EP Retaliate to really get into his music.

The other really interesting band I will be getting to see for the first time at Retreat is the rather elusive Glasgow band Milk. Without so much as a MySpace page to their name, they are comprised of two guys I don’t know and two I do. The latter two are the supremely talented Pablo from My Kappa Roots and Michael, the former drummer for Scotland’s most frustrating recent musical casualty Findo Gask. They don’t have any kind of internet presence, they leap all over the place genre-wise and they sound incredibly, incredibly promising.

While we’re on the subject of promising new bands you can actually kill several birds with one stone at Stereo on the 27th August, where four very interesting bands share the bill. Paws are new, lo-fi and riffy, and lots of my cool friend like them, which I have to confess I tend to find slightly intimidating. Deathpodal’s fantastic ExuWow_ EP was a weird treat which spun from alt-folk to lo-fi metal and back again over the course of five very fine songs indeed, and they are playing too. Also on the bill are RM Hubbert as well as Adam Stafford, the supremo of one of Glasgow’s most interesting DIY enterprises: Wiseblood Industries.

Glasgow of course, unlike Edinburgh, can get high profile gigs most of the year round and doesn’t have to wait on the Edge Festival lineup with bated breath once a year.

HEALTH are playing the Arches on the 30th August. I recommend this one - they are scuzzy noisy and excellent.

The frantic Fang Island are at the Captain’s Rest on the 5th September. Their songs ascend to hysterical mentalism with pleasing reliability, but they rather unfortunately clash with Jonsi, who is playing the O2 Academy on the same day.

That Other DIY Festival

Quite why anyone would put on a music festival within two hours’ drive of Edinburgh in the middle of the most dominant event in the city’s cultural calendar is beyond me, but then again Fence Records have made a twenty-year legend out of doing exactly what the damn hell they please. In their home of Anstruther in Fife, from Monday the 16th to Saturday the 21st of August, they are hosting Haarfest (The Haar is a rather chilling sea mist which tends to descend rather quickly and ruin most promising Summer days on the East Coast of Scotland, leaving you standing around in shorts and flip flops freezing your tits off and feeling very silly indeed).

Haarfest is a week of music, three bands a night, with plenty of collaboration and experimentation encouraged. It will be as friendly and down to earth a festival as you are ever likely to attend, and will feature bands such as King Creosote, Lonepigeon, The Pictish Trail, Silver Columns, Inspector Tapehead, FOUND and Adem, as well as daytime activities which range from the worrying (crafts?) to the active (hikes and 5-a-side football) to the civic minded (beach cleaning). Tickets can be bought for individual nights or indeed the whole week.

Some free downloads from Bandcamp

A Retreat Festival sampler can be had for free from here. I can’t recommend this highly enough: http://retreat.bandcamp.com/

The Japanese War Effort have a free EP called Surrender to Summer, which is absolutely brilliant. It’s a short, perfectly executed helping of dreamy, lo-fi electronic pop music and something which I have not stopped playing since I first downloaded it a couple of weeks ago. http://thejapanesewareffort.bandcamp.com/

King Post Kitsch is a Glaswegian currently exiled to London and who has released two free home-recorded EPs on his Bandcamp page. His latest, Monomaniac, starts with a burst of Kinks-style pop excellence, before sliding into a dazed narcotic reverie. http://kingpostkitsch.bandcamp.com/