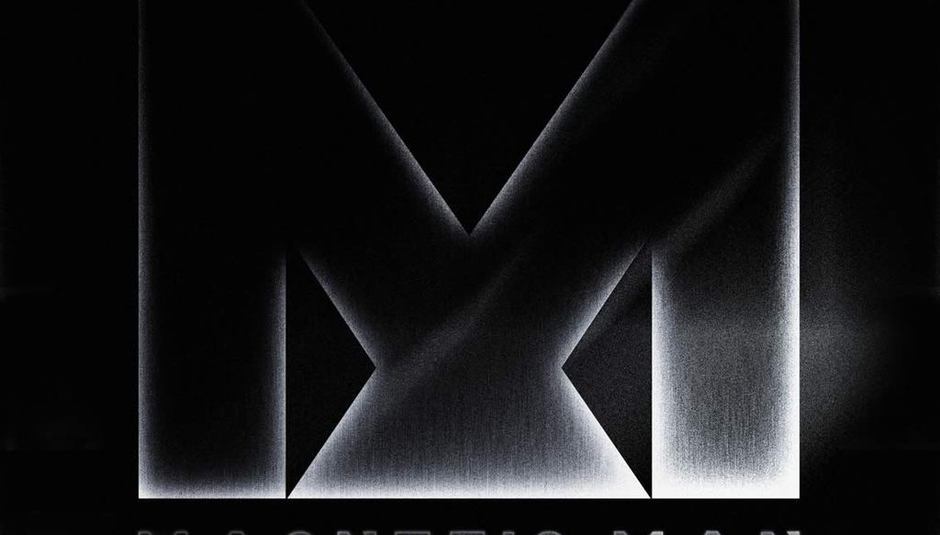 I may have gone a bit Not Right this week. Sorry, everyone.

‘You’re making this hard for me’ is one of my favourite pop lyrics; even if it did insist on appearing in a song by Blue. It seems to convey some of the irk at work when you fall in love and can’t quite help yourself; you did not ask for This. And Magnetic Man have used it on ‘I Need Air’ - which is the record you should point to if an alien drops round for a cup of tea tomorrow and asks you what modern pop sounds like. You see, the difference between this and something unsuccessful (and I don’t mean unsuccessful in the sense of sales or anything else blah) is, oddly, both tiny and massive. It’s so small you almost don’t hear it at first, because you’re too busy ticking off the criteria, and you’re all like ‘Let’s see, so that’s...’

...and you, you CLIPBOARD WANKERS, you think you know WHAT IT IS. But I am going to argue that you First Listen Opinionators really don’t. Because even though ‘I Need Air’ is both Shooting Stars and Coming Up and Is This What Is Meant To Happen and My Insides Have Gone All Massive and all that other naughty, it’s also so perfectly put together by Mssrs Skream, Benga & Artwork that it NEVER SNAGS. A faultless pop record, then, a joy.

Ali Love has yet to make a wildly over-processed pop confection I did not like, and ‘Smoke & Mirrors’ is largely no different. It has pow-pow synths, drum-machined beats as tinny as my jewellery collection and some disco-desperate lyrics about a chimera of a girl who disappears on the dancefloor; lost in dry ice. And it’s got a pointless, vaguely twelveish intro and some pointless breaks between the choruses. And even though it reminds me of being at a school disco with half a can of mousse scrunched into my twice-permed hair [which I need not point out, was not a happy time], still I love it. Original here, slightly bonkers ‘tropical’ re-swizzle above.

I’m not sure who let me get away with writing 1614 words about Plastic Beach, but I sure am glad they did; I felt honoured to review it. ‘On Melancholy Hill’ is of course the moment on the album where it all goes as downbeat as Albarn’s ever-prickly disposition, and even though it is A Serious One, and even though I usually have little time for those, it is incredibly mournful, romantic and watery; talking as it does of lovers so redeeming, they become ‘your medicine’. Don't miss the doom-bell at the end, though, it's significant.

It’s on DFA. DFA are ‘cool’. It’s also disco, which – like me - mostly isn’t. I loved it, but should you take tips from a person who IS NOT COOL?

The Bees - ‘Silver Line’ (on Fiction, but it is free here)

The Bees are one of those bands that are very definitely Too Happy for some, and the fun-allergics don’t like it, it pains them something dreadful. And while there are no funk chickens or moog moo-cows on ‘Silver Line’ it is still very agreeable, it is the sigh you might make when faced with a pub garden that trickles down to a bijou river, and it is payday, and your boss is mouthing something indistinct but it still looks very like ‘Put your wallets away’ even if he is basically an alcoholic and inlovewiththebooze and will come back from his summer holiday having undergone a conversion of the born again variety and simultaneously have shaved his head so he looks like Kurtz except more mental and even though he will shortly start changing his network password to things like JesusIsTheBest. Which of course, is quite sad. But also, as it happens, partly true, and kind of brilliant if it means you don't have to do any work. The aural equivalent to some baggy jeans and a Sunday Roast with all the trimmings your Mam cooked, 'Silver Line' shuffles about OH SHUT UP ROBY YOU MASSIVE DORK

It's got the same kind of airy quality as a Simon & Garfunkel record from the olden days of 1966. And it's less slight than it first appears. OKAY?

Baptism’s lyrics, which some imbo has typo'd up, so I could look at them on the internet, seem to be a bit Daddy Don’t Touch Me There. This is all rather yawn and awfuls, but as provocation is a huge part of Crystal Castle’s M.O., and as I have now seen them live and feel qualified to report on What They Do, it won't do to get all tangled up. It doesn’t matter, because ‘Baptism’ is four minutes and 13 seconds of mental and throb, and it’s amazing, brilliant, great, terrific, startling. And it also doesn't matter because you can't tell what bloody Alice is bloody singing. You crazy kids!

Housse De Racket have written a rock opera about two tennis superstars, and for that they are to be congratulated. And while ‘Oh Yeah’ is essentially them ganning about with their Strokes hats on, it’s all perfectly quite good. If you remain unconvinced, may I direct your internets here where they do a darling little song called ‘Synthétiseur’ (it means 'Synthesiser') that I can heartily recommend as a Getting Ready To Go Out song.

Amari are also Off Of The Continent, they are Italian, and I think I like them because they sound like Phoenix circa ‘I’m An Actor’. There’s also the fact that ‘Tiger’ is just a straight-up-good pop thing, with a delicious and uncommonly harmonized middle eight where they sing ‘I thought that I was an explorer, but I’m just a boy scout, who runs for cover’. And I like it when songs that strike you at first as daft, end up having quite a lot of actual honest about them. I mean, it is what it is and it might all be a bit Five Years Ago, but I’m not sure I care.

It’s lucky I read Dinosaur Pile-Up’s press release, because it was marvellously helpful in letting me know what MASSIVE DIMWITS they are. Or perhaps I should be fair and point out that the U-grader in question is their lead singer, Mr Matt so-called Bigland, who really does – and in a very real sense – start sentences in ACTUAL REAL LIFE with the words ‘I know it sounds bent’. ‘I know it sounds bent,’ says Matt, ‘but I liked the idea of people to be able to sing along to the songs, even if they were singing about being hated or upset.’ Obviously the correct response to all this is to delete all of Dinosaur Pile-Up’s songs from your iTunes and never mention them again. So this is what I done and shall do. Not putting their video up either.

Millionaires call what they do ‘electro-porno-pop’. So naturally I considered them the Three Horse Women of the Apopcalypse [doyousee etc] - as well as the end of civilization as we know it - long before I had spent a dispiriting half hour on their MySpace. They also chinny reckon they are wilder than Ke$ha, which doesn’t mean very much, as popular comics man Timothy Winchester is very good at pointing out. Apart from ‘Stay The Night’ – which, guess what - no really, guess what - is about wanting no-strings, one-off sex and please don’t try to commit to them because that’s the last thing they want; Millionaires also do a song that manages to spend nearly four minutes stretching a metaphor about wanting to touch a pop singer’s 'microphone' . It also includes an exhortation for the chap in question not to ‘take it slow’, because like all the best women Millionaires don’t mind if it’s all over in three minutes; it’s all the same to them. For obvious reasons, the whole endeavour reminds me of the Letters Pages in ‘blue’ magazines, where I am told there are always heaps of women madly declaring how Men Who Don’t Bother are THE BEST. I could go on. Really, Allo Darlin' should have given this single its full title, which is 'If Loneliness Was Art (I Could Hang You From The Wall)', because then I would have admired them; I have a soft-spot a mile wide for pointlessly long song titles. It also has the word 'jumper' in it, some asides about heavy-hearts and some sha-la-las that sway like I spect you will, when you listen. And she's got a darling voice, and none of it doesn’t work. Unless, like me, you are a bit sick’n’tired of sexless hairsliders, and desire something considerably more frisky. Listen here.

I don’t wish to circle a mere two records and call it a ‘thing’, but I am a bit worried about Rough Trade after first Jonathan Jeremiah, and now this. The problem is that I am not sure who Wilder are for. And I’m not saying it’s awful, it’s not, ‘Girls vs. Boys’ is some perfectly serviceable, low-slung, rangy and propulsive Yelp Indie. Perhaps it is just that Wilder are not making music for women who are essentially quite Laura Ashley in aspect. Yes, that is probably it. Hmn.

Not quite as glorious as the frankly ackfing spectacular ‘Riot Music’, but still pretty mzn. I particularly like how every Donae’o release includes a moment where you can hear him laughing - presumably at his own considerable fortune, at having been born so fuppin brills. The video is awfuls, though, it has ladies in cages. Maybe you like that sort of thing. You dog.

I believe this is what I should be calling a ‘party jam’. And though it is thoroughly trad - as well as being very much the sort of thing a dread, goateed man in a trilby might play were he DJing amongst a gaggle of Retroists at a 70s Night dahn Ritzys - I don’t know, I found it oddly amiable. Harmless, at least. A doom pop song that barrels along rather nicely. It’s all a bit Goth though. And as I am sure you are all well aware, that stuff is bad juju. This is here because I think I am meant to like it.

I’m tired now. The last brilliant thing I did was play football with a five-year-old :( WHY I AM NOT PLAYING FOOTER WITH A FIVE YEAR OLD RIGHT VERY NOW THIS SINGLE IS ADORABLE CAITLIN IS ADORABLE SHE HAS A VERY AFFECTING SET OF PIPES AND IN THE VIDEOTHING SHE DEDICATES IT TO 'WEREWOLF GIRLS' WHICH IS PRETTY DANG AMAZING AND IF YOU LISTEN TO IT YOU WILL PROBABLY THINK ‘YES SHE HAS A NICE VOICE’ WHICH IS WHAT YOU SHOULD THINK, SHE IS VERY TALENTED AND OH LOOK, A BIRD

Also out this Week! Look how many there Are! Not good, is It! Vaguely disappointing, you might Say!

AM - ‘Self Preservation’ (Naim Edge)

Husky Rescue - ‘They Are Coming’ (Catskills)

Wendy is on Twitter here. Stop distracting her with all your funny and clever, please.