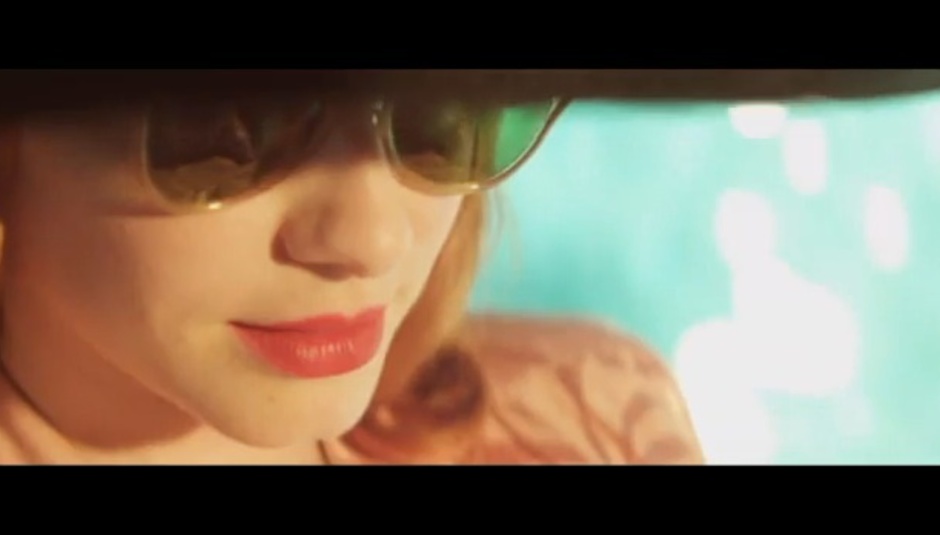 Songs That Spin You Out are never not good, which is why Pictureplane start ‘Cyclical Cyclical (Atlantis)’ how they mean to go on. Which is to say; with a chord sequence that sounds like it’s attached to a boomerang. And as it whizzes away from you; and as you know it’s coming back again, there is a delightful air of fulfilled desire. As if you immediately know and can trust Pictureplane not to be damnably irritating types and take that chord sequence away from you. They do not mess, they are not about to wave their pretty organ stabs in your face just the once; they are not musical prick-teasers. This, of course, is the opposite aural equivalent to those artists who don’t believe in repeating ‘the good bits’ - and who instead prefer to dangle their hooks like carrots, but who whip them away like bending, jerking fishing rods as soon as you get into it. And OH LORE, I HATE THOSE GUYS. So the first thing to say, is that ‘Cyclical Cyclical (Atlantis)’ is a merry go round. It is the pleasing poppet who disappears from view before waving and shouting ‘Mum! Muuuuuuuum! My horse is called Sadie! It has a red SAAAAAAAAASH!’ when it comes back again. You know this now, this bit is Done.

The second thing I want to tell you is how it is all rather sexy, with its repeated proclamations of how Pictureplane are ‘all visual’. 'We're all visual' is what they keep saying. Now, to my mind (and do imagine it, do think of someone you quite fancy saying ‘Thing is, [your name here], I’m quite a visual person’ - get it properly fixed in your brain) this means only one thing, and that thing is quite rude. But then I saw the videothing, and remembered that Pictureplane are ‘art’. And so maybe by 'visual' they just mean installations, canvas, all that. (Less interesting.)

Lastly, even though ‘doof-doof-doof’ is the sort of thing Your Mum [or, let’s be honest here – me] would say, ‘Cyclical Cyclical’ manages to grab hold of its best, essential doof-doof-doofyness and have some serious, Summer Holiday, let’s-not-go-home-yet-it’s-still-light-out larks with it. This means it is BANGING as well as pretty. And basically it all combines to make the sort of single I could not but fall in love with - even if it didn’t have gorgeous, wantable packaging, but which – hurrah – it does. More on the lovely twelve [do let ‘lovely twelve’ roll around your tongue for a bit, won’t you?] available in exchange for cash, here. PIFCO’s ‘UK Adults’ came on my stereo when I was feverishly preparing for a friend to visit the other weekend, and I was awl-a-stress with Making Things Nice and Making Sure I Did Not Look Like I Had Let Myself Go because it had been habsolutely ages since we had seen each other and I was keen to prove I was making a success of my new, adopted city. And the marvellous thing it did, was to make me giggle to myself, because PIFCO are nothing if not smile-provokers. And though they have a neat line in posturing which will inevitably draw comparisons with Devo and Mark E Smith (though I think they deserve better than that, they are more than agit-punk copyists), this also makes you want to sing along; and that is good for a person’s state of mind. Happily, ‘Wet Look Leggings’ (or ‘Wet Look Legg-inns’ as I should prefer to call it in my best, oiky Estuary) springs from the same well of fun as their debut. And even though the item of clothing in question is pretty much abominable, as a single it more than does its job; it might even deserve the corner office and the best-looking secretary. Which is to say, it makes you stiffen your spine, pogo, yelp and E-NUN-CI-ATE. Also: a helpful P.S. Do not be goggling for ‘wet look leggings’, unless you’re the kind of hole who pervs on ladies in spiny shoes.

Sometimes, I am thoroughly amused by the hard-working people of The Musics, and the Dark Arts of Promoting same. So it is with the people who reprahzent for Princess Nyah, who go to the trouble of calling me even though I write a column (mostly) about difficult noise and dirty miserablists. And even though keen readers will know that I go out of my way to avoid said sadfacers and musical troublemakers, it still seems rather odd that I should be arxed for my opinion on UK Garage. Because - as will become painfully obvious - I know precisely nul about it. Knowing naffing, however, is not about to stop me expressing my fawts, so I sidle up to ‘Butterflies’ anyway. And it is then I spy it’s wicked, wicked cheap-as-booze-with-the-word-lightning-in-it video; and I really do think to myself ‘That is a brilliant pop song’; and it is girly as polka dots, and easy and breezy on the ears as a thing could be. A naive tonic, is what this is. The Donae'o remix, even moreso.

Broken Bells are not interested in a jury of their peers, which is why they took the darling step of asking kiddiewinks to review their single. See what a better job they do than the grown ups here, or perv over Joanie in a too-tight, they-musta-hadda-let-it-out-in-places, ladyspaceman onesie, above. It’s a good song. BUT NOT GOOD ENOUGH, YOU DISAPPOINTING FUCKERS.

Having decided to limit her single release schedule to Songs About Girls Who Are Crap And Annoying And Who Might Be Trying To Snog Her Boyfriend, I find I like Ms. Nash less and less. This, despite the fact that her songs are getting better and shinier, and shinier and better. Come on Kate, you are ace and lovely, but you’re also not the only girl who is.

Chromeo - 'Don't Turn The Lights On’ (Back Yard Recordings)

About wanting to have sex in the pitch and black, ‘Don’t Turn The Lights On’ is, let’s face it, the sort of sentence that sounds quite good in a pop song. But it would be rather beastly and unforgiveable were someone to say it to you real, hactual life; forcing you to the dread conclusion that either a) something very woe and Shakespearian-sounding was occurring ‘down there’ or, worse, that b) they did not think much of your bits. But despite the air of LIGHTS OUT FUGLIES, this pulses along rather beautifully, and of course, it succeeds in making you want to procure someone to snog. Which, in case you are wondering – and even if you are not - is the point of all Chromeo songs. Because they are quite randy.

It can’t be easy having Paul Simon for your Dad, can it? But in the posi-column, at least it means you shan't have to suffer hearing weak jokes about sounding like him, as per Wampire Veekend. Bloody good job I read the press release though - because I was thinking ‘Wowzers, this don’t half sound like Paul Simon’ [in a GOOD WAY] before I realized what the eff was going on. Empty your mind, everyone, because 'Wishes & Stars' wants to fill it with awe and air and heaps - simply heaps - of atmos.

The Futureheads - ‘I Can Do That’ (Nul Records)
This is nothing like as bad as the hataz are saying. Also: bored of hataz, hating on thingz. And call me a wispy nutbag if you really, really must, but defining yourself by what you hate - rather than love - seems a thoroughly dispiriting M.O.

Ólöf Arnalds - ‘Innundir Skinni’ (One Little Indian)
Someone told me a story about Ólöf at the weekend. Unfortunately my notes about this story are comprised of two words; one of which is ‘burping’, while the other is the c-bomb. Good story, bit ished when I heard it.

Panic Attract – ‘The Wrong Place’ (Wailing Woo)
Panic Attract wrote me a charming email and were not woeful. So well done them. More here

Archie Bronson Outfit - 'Hoola’ (Domino)
I may have mentioned this before, but one of my favourite ever Jack Handy quotes is ‘I hope life isn’t one big joke, because I don’t get it’. And it sprang to mind as I listened to Archie Bronson Outfit, who I do not get.

Underworld - ‘Scribble’
‘Dubnobasswithmyheadman’ is the punchline to one of my favourite cartoon strips, what is called ‘Kraftwerk At Their Local Electrical Retailers’. Stick it up on your blog please, Mr. Jonathan Edwards.

Revere - ‘We Won't Be Here Tomorrow’ (Albino Recordings)
No idea.

Wendy is on Twitter, here. You know, despite all the rank smartarsery above, she does actually listen to everything she gets sent.