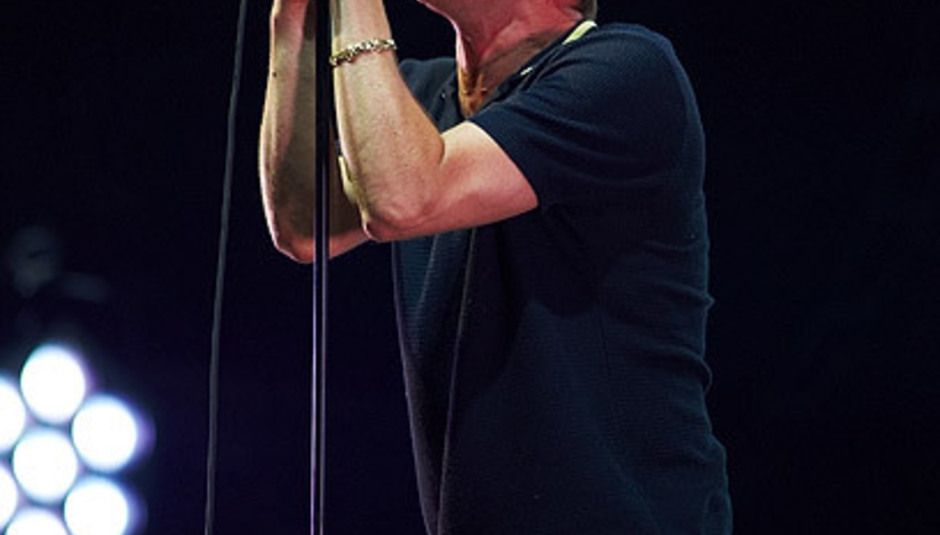 There’s been a strangely low-key build up to this year’s Glastonbury Festival, even more so considering that it celebrates its 40th anniversary this year. There’s been no complaining about the festival becoming out of touch, no criticism of aged headliners taking the places of current acts, no fretting over ticket sales (they sold out, as they do almost every year,) no grumbling about how the festival isn‘t what it used to be, and nothing even about that staple of British worrying, the potential for rain. Michael Eavis eagerly reported recently that, for the first time in its history, it’d received the festival’s license without a single objection from the local community, whilst the biggest furore pre-event surrounded Bono’s dodgy back and the cancellation of U2’s headlining slot. Even this doesn’t seem to have caused much outrage, neither did the announcement that their replacements were going to be a cartoon band fronted by a man who topped the Pyramid Stage bill only last year. Glastonbury, already regarded as a national institution by musos, travellers and performers, has - particularly in the last decade - been gaining that status in the mainstream. This year feels like it’s finally achieved it.

Or, to play devil‘s advocate, Glastonbury has become just another festival.

If you go with the theory that it’s better to be castigated because at least they’re talking about you, then this year’s build up has been limp. Sure, ticket holders are excited about the line up, but then that’s true of those holding tickets for T In The Park and Reading and Leeds; is there much outside interest over the fact that Stevie Wonder will be closing the festival on Sunday night, or Muse on the Saturday? Indeed, a look through the line-up sees things being played remarkably safe: most of the acts the NME leans on to keep itself in circulation is here as well as a smattering of currently blog-hyped acts. A dubstep stage is irrefutably a sign of Emily Eavis taking over the booking reins. A lot of these will go on to play other festivals on our shores this summer too, dimming the novelty of seeing them perform at Worthy Farm, and the claim that the Pyramid Stage would play host to an artist from each of the past forty years has also failed to materialise.

True, the likes of Arthur Brown and Ray Davies are playing over the weekend, but they’re drops in an ocean of ubiquitous acts that any Guardian (official media partners these days) reader between the age of 18 and 35 would recognise - looking at the Friday line-up of the John Peel Stage I’ve struggled to pick out even one act the great man would’ve liked. And then of course there’s the onward march of corporatisation; the 40 per cent stake owned by Festival Republic, the money pumped in by all and sundry. In his preview last year, Andrzej Lukowski talked about the Britpop movement wresting the zeitgeist away from the travellers of the Eighties, and then in turn having it plucked from its hands by the safe TV broadcast-friendly nature of middle England culture; there’s not much evidence to suggest that this isn’t the case. The festival is big business now and the BBC will once again be sending hundreds of staff there to showcase that fact - like they do at Leeds and Reading, like ITV do at the Isle Of Wight, like Channel 4 do at V.

So, is the fervent anticipation for the festival now a done thing? A few I’ve spoken to have noted how it’s simply crept up on them this year; is it just another weekend for students to get pissed up, for well-off families to get away for the weekend? And what of those hippies and the travellers who defined it in its early years, is it a loss that they’re no longer held synonymous with the festival? According to the Levellers Mark Chadwick it‘s quite a different story: 'Its nature has changed, but the underlying element of it being a simply wonderful and totally unique place has not.' Whether loved or loathed, there’s probably few better to talk about changes in the festival than the group who set a record in the 1994 for the largest front of stage crowd ever. Chadwick's been there as a punter and performer (the Levellers headline the Glade on Sunday night,) and he explains: 'I started going in the Eighties, just as a punter. In those days large groups from identifiable alternative ‘scenes’ such as bikers, rastas and, of course, the travellers used to go. These people had their defined areas within the festival. In those days you definitely felt you could be robbed, and these people brought with them an element of chaos, danger (and fun) to the proceedings.' He agrees that 'this is the side of the festival has definitely been lost in recent years.'

And yet, in his eyes, there‘s still something undoubtedly unique about Glastonbury. Despite his admission that 'the creeping corporatisation of the event has become much more obvious,' there’s still the feeling of an almost intangible presence about the event. 'Glastonbury has evolved enormously over the years – it is almost like a person; when it started out it was a rebellious young thing and over time it has matured, become more sensible, more corporate and more conservative, but it still has the same heart beating underneath.' Mark explains further: 'In the Nineties, Glastonbury was fantastic for the Levellers. Having graduated from being a punter to being in a band, I saw Glastonbury grow from being a festival, into a world beating music festival. However, even when we were playing, I still strived - and was able to - connect with the ‘real’ festival. For me at least it was less about the music and more about being part of a wonderful event, a summertime celebration.

'And in the Noughties, even alongside the new fences and the sponsors and the corporate hospitality, the festival has still managed to retain its magic. There is nowhere like it in the world; you simply can’t beat it, it’s amazing!'

This is what’s stayed with me as I prepare to head to Worthy Farm, feeling slightly odd that 40 years into its history, this will be my first time in attendance. There’s a sense that despite its changes over the years, none of them have ripped the event from its core. Referring again to Andrzej’s piece last year, the remark that those who’ve been will have their own definitive ‘Glastonbury moments’ away from the recorded ones fed to us in our homes is undoubtedly true. But from the many recollections I’ve heard, from peers my age to past-attendees now in their 60s, the notion that there isn’t anywhere quite like it in festivaldom has always shone through. You hear tales of other weekenders and they’re identikit, bleeding into one hazy stupor, but for some reason those that talk of Glastonbury really make you feel like you need to go there, at least once.

And so I am! And if all the above suggests a man slightly too excited about going, then it’s because I really am. For the fact that it’s reached 40 and remained the dominant name amidst a now massively competitive festival season is as good an indicator as any that Michael Eavis is still doing something right. The line-up might be on the safe side (although I’m willing to bet you’ll all point me in the direction of an act playing this weekend I’m not aware of,) but there’s a reason some of these more mainstream acts become as such: they’re actually pretty good. The chance to see someone like LCD Soundsystem, who’d cost £30 on a rainy Wednesday evening, play alongside dozens of other groups of similar stature in a unique atmosphere on a (we hope) barmy summer evening is pretty exciting indeed. Mostly though I’m excited to experience and write my own tales, those that I can impart insufferably for years and years (starting with my review here next week.) Happy fortieth Glastonbury, here’s to many more.

DiScuss: Has Glastonbury become “just another festival?” If not, what keeps it unique? Is it a shame that the demographic of the festival has changed to what it is now? Do you think the festival will change again when Emily Eavis fully takes over next year? Any tips for a naïve greenhorn like myself?