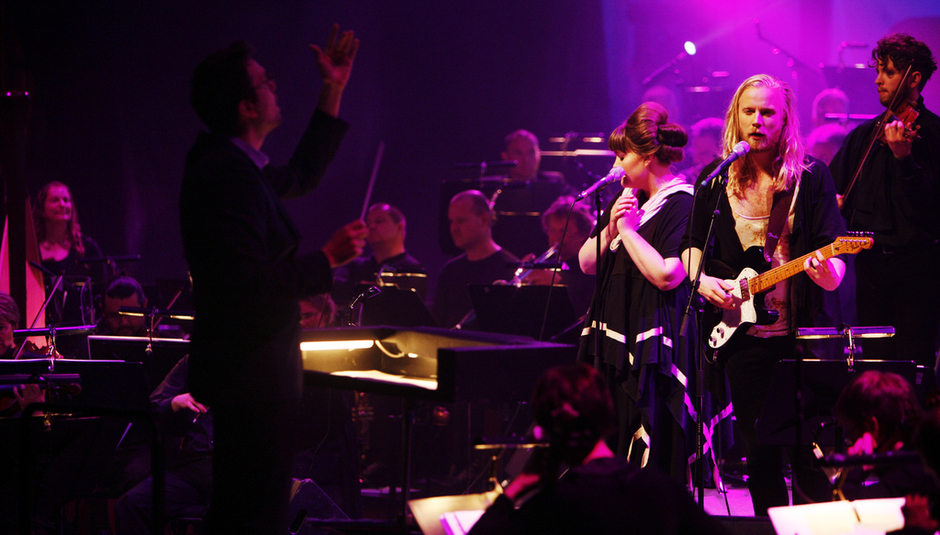 On hearing much of the grand, orchestral pop on Reykjavik seven-piece Hjaltalín's second record, Terminal, the potential for far bolder and indeed greater things is imagined – in numbers and substance. Precisely because of that, the feeling exists that their performance tonight, backed by the 80-odd strong Iceland Symphony Orchestra, is more of an absolute realisation of that collection of works than a mere extension of them. That the base material is so layered, carefully constructed and expertly composed augurs well.

Speaking to lead man Högni earlier in the day, he talked of making sure that all that is present in a piece of music being necessary and not in any way expendable. Striving to ensure that each and every inclusion from the Orchestra enhances the performance must have been a worry but, like all that is heard here, it's unlikely that the smallest speck of doubt would have surfaced in his or anyone's mind. Every addition and embellishment creates a whole that is unimaginably large and every piece utilised, from the tiniest incidental percussive hit to the expansive brass stabs and peripheral cymbal crashes.

The programme tells us a new song (frumflutningur) 'Foreleikur' will open things up and gently it does, before the more familiar, pained up-and-down lament of 'Suitcase Man' marches into place. Getting so lost in these rich and vast orchestrations it's a little easier than it should be to overlook the quality of the lyrics. There is not just a command over the English language but a thorough knowledge of it, as the heartbreaking tale told in 'Sonnet For Matt' in the second section amply demonstrates - though that song is far from alone in its resonance. His voice, in great contrast to the almighty vocal chords owned by Sigríður, is both strong and delicate, smoke textured and seemingly always on the verge of failing, but when the two combine on the coruscating chorus of 'Hooked On Chili' we are taken on a harmonic rollercoaster. Sigríður's own melodic opus is the closely-following '7 Years', yet another track cut straight down the middle, with a wistful verse offset against a gigantic chorus where everything that can be played is played.

It is not just the words of the duo in the centre which echo deeply. The introduction of a fresh-faced female youth choir for the choral interlude on 'Sweet Impressions' was verging on too much to take. The interval came at the right point to stop the more emotionally-charged of us welling up. OK, so it wasn't quite that powerful, but it was far more than just a nice touch.

Two more taken from Terminal begin the second section, 'Stay By You' and 'Montabone' - a melodic exchange and duet. Occasionally the pizzicato of the lower strings bring an abrupt close to a piece and astound – so much so that a breath is missed and eyebrows are raised in awe. At these points Högni's smile is so loud that it's almost audible. The impossibility of holding back his pleasure in the scale, grandiosity and performance was never going to happen and likewise the camaraderie between the orchestra and the band. Occasionally these sorts of set-ups can feel partioned, with an invisible barrier between two sections. The fact that fiddler Viktor and bassoon and percussionist Rebekka spend much of the time in their respective sections demonstrates the crossover and unity, combined with the joy of teamwork.

Surely there would have been little debate in the ranks as to what what end it all? With a track containing a hook as bold and joyously intrusive as 'Feels Like Sugar' – complete with a hair-tinglingly powerful key change – it represents one of several highs but it is the ultimate peak. To describe Hjaltalín and the Iceland Symphony Orchestra's show as special is understating it, and even doing the meticulous preperation from those involved a major disservice. The glee expands from the stage to the 900-strong audience during two standing ovations, gushing over every row where it had previously seeped from the stage. The preperation is just the start - it still needs a body to personify it and realise the potential. Here that unified body of perfection is found in Hjaltalín.