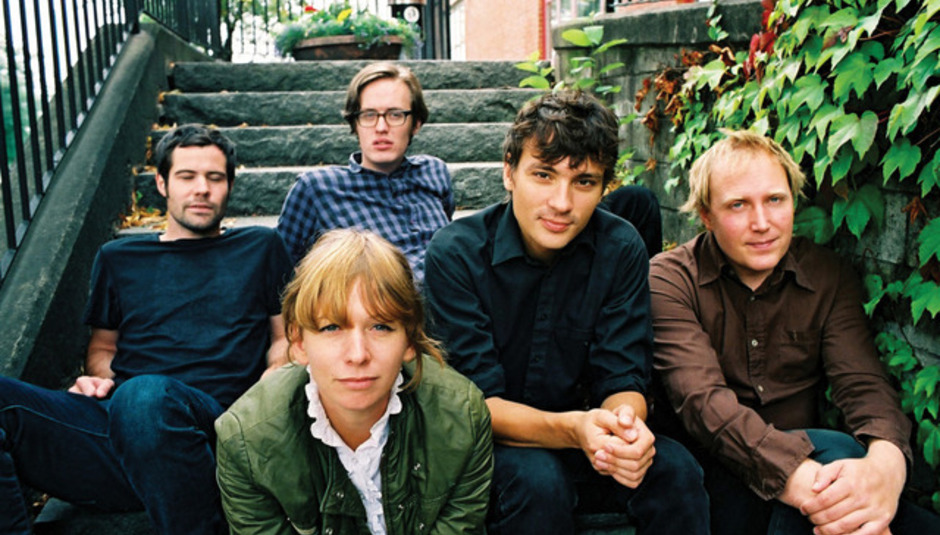 Gothenburg-based gonzo twee yelpers Love is All have been charming us something fierce ever since their superb debut Nine Times That Same Song came tunefully screeching out of the traps in something like 2006-ish. DiS's indubitable Mike Wheeler caught up with frontlady Josephine Olausson vis the medium of email, ahead of a smattering of forthcoming UK dates, including one at Camden's Proud Galleries on the 12th, and at Indietracks on July 24. HERE IS WHAT SHE HAD TO SAY.

DiS: Hey. First of all, how has the tour been going so far? Has it been good to get out and play the new record?

JO: The first tour we did of the US in support of the new album is long over. It was really fun and pretty lengthy by our standards. We had unexpectedly fun in places like Fargo and Des Moines. And next week we're about to embark on a very short little European trip to Denmark, Netherlands, France and England. We are really looking forward to getting out and playing the new songs again as it's almost always more fun to play new song compared to ones that you've played for the past five years.

DiS: Could you explain a little bit about what was happening around the recording of the latest album, especially in terms of leaving [record label] What’s Your Rupture? Was it quite an uncertain time for the band or were you always sure that you would keep making music regardless?

JO: I don't think we really left What's Your Rupture?, but it was sort of an unspoken and communal decision that [second album] A Hundred Things... would be our last record with them. We had no idea who, if anyone, would release our new recordings. But we just really felt like meeting up and writing and jamming all of last summer, this time without any pressure. Whoever felt like making it to the space was welcome, but no one was forced. I think it resulted in a much more relaxed way of working which I think can be heard in the songs. We just figured that if no one wanted to release it we would just post the songs on the internet for anyone to have. I don't think this band has ever existed based on having a label, I think that we will continue making music together for as long as we're having fun doing so. Regardless of anyone else hearing it or not.

**DiS: Was it quite a liberating feeling around this time to not have any obligations or constraints? It sounds like for the recording of this album, you just focused on having fun and doing what you wanted to do.

JO: Yes, as I mentioned above, it was really a great time. It felt more creative and relaxed and fun than in a very long time.

DiS: I’ve often read that you like to have complete control of all aspects of your music (artwork, recording, etc) and are ‘bad with trusting outside ideas’. How does this, almost gang mentality, manifest itself outside of the music? Do you just come together for ‘band’ stuff, or are you hanging around with each other all the time?

JO: We haven't really been hanging out so much lately. Markus has spent most of spring in New York and I've been pretty busy traveling and watching movies when at home and the others have been working... but now it's summer, Markus is back in town and we are all very much ready to start hanging out again - grilling in the park and going swimming and other summer activities.

DiS: I think the title of the new album, Two Thousand And Ten Injuries seems pretty apt as it feels like you primarily enjoy writing all about the absurdity of love’s little cuts and bruises, and Josephine, you’ve said ‘I can't really write about love being too straightforward’. What process do you usually go through when thinking about writing your lyrics?

JO: This is such a difficult one. It really varies. I feel like maybe I've relaxed a little in my fear of being too straightforward. I just don't want it to be uninteresting or too boring or too bland. Usually I tend to put off writing lyrics until the very end and then I go crazy and swear a lot and hate the world and then I finally sit down and write something. I usually have a line or a vague theme in my head before I start writing.

DiS: Are there any artists whose take on love you particularly like, or who might’ve been an inspiration for the way that you write your lyrics?

JO: No, none that I can think of. But there are a lot of people writing beautifully and honestly about love in a way that I wish I could, but somehow it just seems all phony and rotten when I try.

DiS: Going back to the idea of the song writing process, how do you normally bring a song together? Is there a specific routine you have when creating a track?

JO: No, not anymore. It used to be that all songs started with lyrics, but that has sort of changed lately. These days a song can start with anything from a band jam to a drumbeat to someones almost finished song structure.

DiS: The thing I like the most about the latest album, and your sound in general, is the almost bi-polar style extremes of emotion that feature in the songs, the way you can go from a buzzing ecstasy to a scrappy and fragile melancholy without too much in-between. Do you think this is in some way representative of the way you might see life, or is it just purely the sort of sound you were interested in making?

JO: I've never really though of it that way before, but when you mention it I definitely think that there is something in there reflecting the way we all see life. Markus, especially, can go from being extremely grumpy to loving life in the time it takes him to eat an apple. And I think that I too am slightly bi-polar when it comes to viewing life. Mostly though I think that it's just all of us being too restless to make an entire album expressing the same emotion.

DiS: Finally, are there any plans or ideas for the future, or are you just going to finish touring and see what happens?

JO: There are currently no real plans for anything, we have a bunch of shows coming up and that's it. But we have of course started talking about meeting up and jamming together again, it's been ages. I bet you we will be in our practice space writing songs as soon as it starts raining again.