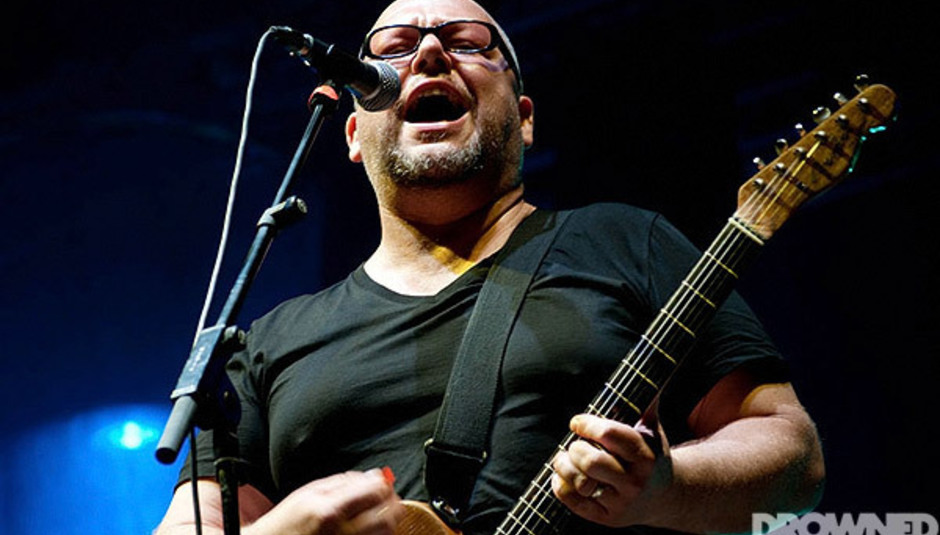 The only downer here is pondering exactly how awesome this would be in an actual spit and sawdust dive bar, but Yo La Tengo’s garage rock alter egos blitz through lord knows how many crunchy covers (it must be at least 20 in 45 minutes) with such hangdog intensity that you can almost forget the, y’know, sun and sea and crowds and fact this is Yo La Tengo. I’m pretty sure I don’t recognise a single song, BUT THAT’S NOT THE POINT. Just before hand we rack up what must be disappointment of the festival by going to see what is billed as a Wire acoustic set. It’s billed as being 20 minutes long, takes a goodly while to ‘set up’ and turns out to consist of Colin and Graham singing one song a cappella. For completists only, methinks. (AL)

It seems that every time I see Wilco (one of my favourite bands) something goes wrong. Tonight is no exception: as they rattle their way through the opening ‘Wilco (the song)’ the sound goes out, leaving just voice and drums out in the open. After a decent but marred run through ‘I Am Trying to Break Your Heart’, Jeff Tweedy whips out an acoustic guitar, asks the crowd to sing along to ‘Jesus, Etc.’ with him, and suddenly all is well with the world (apart from the braying idiots behind me; victims of some pretty serious glowering on my part). The rest of the set sees some pretty exceptional renditions of songs from throughout the band’s career, ‘Misunderstood’, ‘A Shot in the Arm’ and a noisier than ever ‘Via Chicago’ sounding especially fine. Also: I don’t think I’ll ever tire of watching Nels Cline shred his way through ‘Impossible Germany’. (JS)

The previous night, a friend comments of Pavement that “they’re OUR Beatles”. He takes this back sharpish this evening: Pixies must surely attract the biggest crowd any act at Primavera has drawn or ever will draw. ALL their songs are pretty much amazing: would they really have pissed off so very many people if they decided to ignore the first two records? It’s academic, of course, as they play pretty much everything you’d hope them to, plus some nice treats like ‘Caribou’ besides. It’s hard in some ways to quantify why this is great, other than to say that this is the Pixies, playing Pixies songs – Frank doesn’t even speak to us, and it’s hard to pinpoint anything they do that’s especially astonishing. But y’know... this is the frickin’ Pixies, playing Pixies songs. (AL)

At 2.30 in the morning down at the Vice stage, Yeasayer’s Chris Keating is getting himself into a bit of a tizz over the Ray Ban banners that adorn the stage (probably because they’re so big and bright they render band’s own colour scheme fairly ineffectual). It’s quite funny, actually: a few songs later he hypothesizes that the ads’ illustrator is in the audience, and offended by all his talk of “barfing”. The band’s set is crisp, clear, a bit of a relief after all the sludgy noise I’ve bore witness to, and during ‘2080’, ‘Tightrope’, ‘O.N.E.’ and particularly the closing ‘Ambling Alp’ (which was featured on the TV ad for the festival over here), it nears the transcendent. A puzzling little dig at the UK as the band depart leaves a slightly sour taste in the mouth, but still: A.W.E.S.O.M.E. (JS)

Also seen: we miss Low’s apparently amazing Great Destroyer set to watch The New Pornographers blast us with sunshine instead – not complaining; CocoRosie are loopily intense and have surely the world’s heaviest beatboxer in lieu of a drummer; Shellac do what Shellac always do, playing the same stage at about the same time as they did when I was here in 2008, and it’s still great; Diplo parachutes in for an annoyingly short but undeniably slick set in which he’s not afraid to remind us he produced that there MIA album; Joker and Nomad are total gents, dropping some old skool d’n’b chestnuts and gamely extending their set to fill the half hour gap between themselves and Diplo (would have been lovely if Diplo might have considered doing this, BUT STILL).