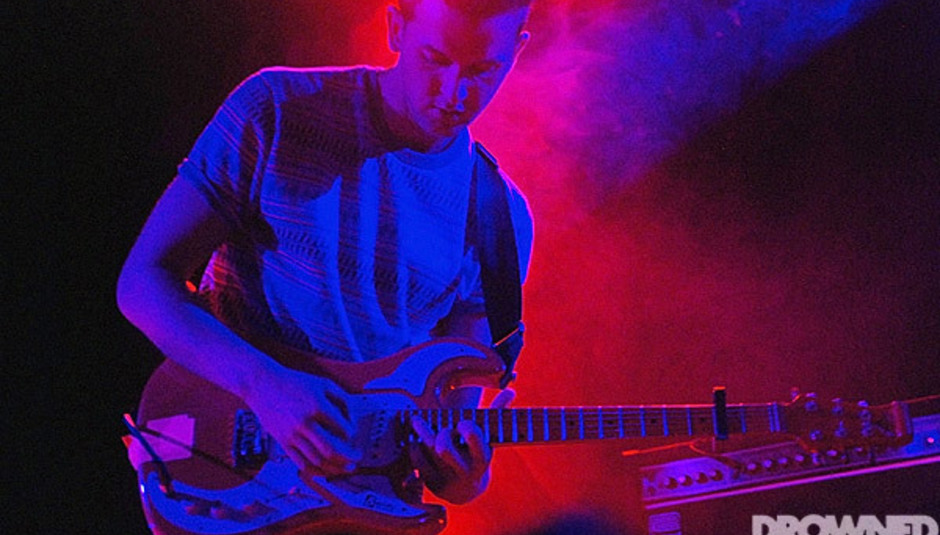 Last Saturday delivered the busiest day in the Leeds musical calendar, with the venue crawl that is Live at Leeds giving us a whopping 170 bands to choose from. No doubt many people carefully crafted routes to see their favourite artists, then drank lots of beer, ditched those plans and ended up discovering all new favourite bands instead. My day wasn’t too dissimilar…

After a trip to the efficiently run wristband exchange my friends and I headed down to The Cockpit to begin the onslaught of alcohol music. We began with Sam Airey who set a high benchmark for the rest of the day. He’d attracted a good crowd down to The Cockpit, with late comers struggling to get beyond the stairs for people. Sam’s set triumphed over a few sound hiccups and an issue with a banjo that was abandoned but then “nobody likes banjos anyway”. With tight backing vocals, glockenspiel, and cello all new additions to the live setup, the songs had a new depth, especially on the rousing ending to The Oak Tree. Unable to get anywhere close to see Rolo Tomassi properly we loitered by the bar before deciding on a trip to Holy Trinity Church to watch Paul Thomas Saunders. It turned out to be a worthwhile journey with the church being a perfect venue for the band’s sound, often the reverb of the building can be detrimental to a performance but in this instance it only added to it. The lyrical refrain of “doolally, doolally” from Fruit of the Poisonous Tree never quite managed to leave my head for the rest of the day. In fact just typing this has brought it back, bastard!

We weren’t going anywhere else as Blue Roses was up next and she was a memorable highlight from the previous year. Opening with 'Greatest Thoughts' accompanied only by her keyboard and some delicate percussion the pews were immediately hushed. The crowd swelled as people struggled to find space and took to sitting on the aisle floor, and the whole congregation was treated to a beautiful set of folk songs taken from her debut album and the follow up EP.

Thinking it was time for a change of scenery, we made the lengthy journey across town to catch Lone Wolf at the Brudenell. Brooding songs including 'Soldiers', and '15 Letters' kept the heart of Paul Marshall’s old stuff whilst now being much grander. A large proportion of the room seemed familiar with the magnificent 'Keep Your Eyes On The Road' which was performed with an abundance of passion, and somehow managed to sound even better than on record. Perhaps it should have been the set closer.

Next on was Male Bonding who failed to win me over after a couple of songs, maybe an example of style over substance. So I absconded to the lounge area of the venue to wait for the next band.

I was then rewarded with the high point of my day, which came from 3 guys who played like they were having the time of their lives. Throwing out short and punchy punk-rock songs that quickly won the room over with lyrics covering topics about casino visits, partying, and wanting to kill. Each track was divided by brilliant pre-recorded clips of banter that let everyone know just who they were watching – “Philadelphia Grand Jury … you can call us The Philly Jays”.

When we arrived at the Refectory, guitar and drums duo Blood Red Shoes had gathered a large crowd of excitable youngsters. Powerful new tracks including 'Heartsink' and 'Light It Up' slotted perfectly alongside old favourites and were lapped up by the pogoing crowd, possibly more so than the older tracks. Whilst I enjoyed the set I couldn’t help but think they would have come across a lot better in a smaller venue where it would have been a more intense experience.

After a crisp based meal it was time for Sky Larkin at The Well. The sharp power-pop trio seemed well suited to the venue and appeared to be enjoying themselves, with the crowd in a jubilant mood too. The biggest reactions were predictably for the singles from The Golden Spike, but the news songs were not a dramatic departure from the 3 minute wonders that filled their debut and stood up well against the older material. The final set of the evening flew by and Nestor’s drumkit was soon being hastily reassembled for a brief encore before the band left the stage to bask in their triumphant homecoming.

Overall Futuresound, all the venues, and artists can be very proud of themselves for pulling together and delivering such a vast programme of bands, and giving us some very difficult choices. One day I will manage to see Wild Beasts in Leeds!