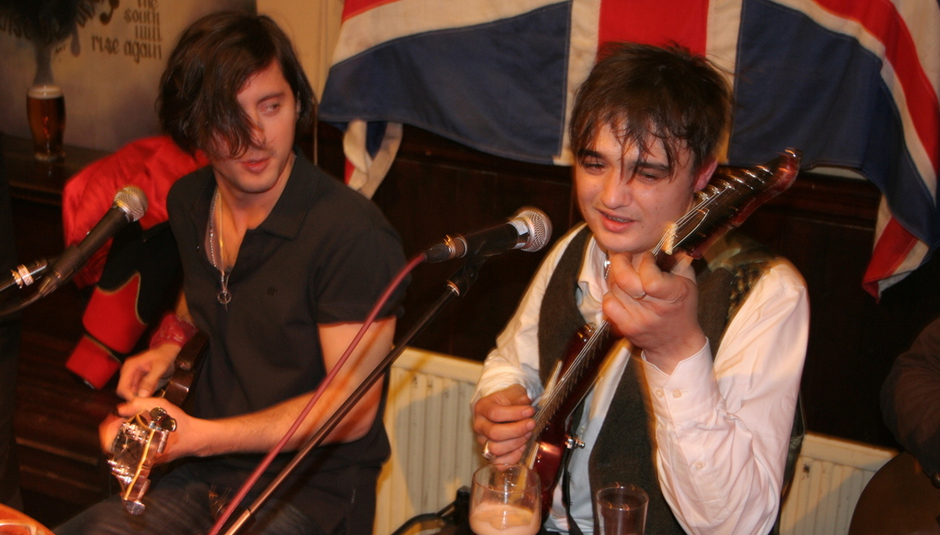 Guess who just got back today? Those wild-eyed Libertines that had been away. But what brings them back? Money? Ego? Music? Love?

That depends on who you talk to. The cynics will tell you it’s the fact that Reading and Leeds Festivals offered them over a million shiny reasons to forgive and forget past transgressions. Ask a romantic, if you can find one, and they’ll tell you it’s the fans, the songs and the fact that Pete Doherty and Carl Barat are back on the sort of terms where you’ll struggle to separate them with a rizla paper.

When I arrived at The Boogaloo, the infamous north London boozer where the band chose to announce their reunion, there were a lot more cynics in the room than romantics. There also seemed to be more cameras than people. The Libertines are a News Event.

By the time I got to the bar I could already overhear people muttering about the band’s motives and the size of their fee. The Libertines became heroes playing in people’s kitchen cabinets and underwear drawers, with half of less than 50p in their pocket and a reputation for pissing it all up the wall if they got any more. How do you square that anarchic spirit with this barrel-load of filthy lucre to play a corporate-sponsored festival main stage? When the band arrived a few minutes later, they found themselves staring down the barrel of their very own media circus, all bulbs flashing. After some polite preliminaries, mainly answered by bassist John Hassall and roughly along the lines of it feeling like the right time to get back together, they were asked the inevitable million pound question: “What is it about the £1.5 million appearance fee that’s so appealing to you?”

“£1.2 million,” Doherty quickly corrected, “and what’s appealing about the money is what’s left over after tax, obviously. Which, turns out, luckily, to be just about enough to pay last year’s tax bill.” A relatively candid answer, but a field day for the cynics.

But if you’re waiting for a romantic, Pete Doherty’s your man. He declined to put his feelings about the reunion into mere words, saying: “The way we’ve always communicated with each other successfully is through music. I know that sounds really naff, but it’s true. That’s how and why we’re together.”

Which sounds all well and good, but even taking the money out of the equation it remains to be seen whether The Libertines have anything new to say. They certainly made no promises of new material, although Barat was clearly eager to start writing. He joked: “We just wrote a song in the guitar shop, but it turned out to be ‘Don’t Look Back In Anger’. We’re gonna keep working on it.”

Many a true word is spoken in jest, Carlito. That line contains a kernel of truth you’d do well to heed before you follow Oasis down a dingy Memory Lane to peddle your own brand of Union Jack-coloured nostalgia with ever diminishing returns. But for now, nostalgia is the order of the day. This means DO NOT OPEN OLD WOUNDS. Barat dismissed one unwanted question about tension in the band with a blunt, “Fuck off with your bitterness!” Drummer Gary Powell got into the spirit of things by promising the music will be as “heartfelt and as dynamic as it possibly can be”, but surprisingly all this misty-eyed nostalgia doesn’t extend to the small pub and house gigs which forged their Libertine reputation. Or at least they’re not letting on if it does, with Doherty declaring: “It’s either gonna be the four of us alone or in front of 100,000 people.”

Whether or not The Libertines succeed this time round is probably down to whether these inadvertent tabloid rock stars can channel the urgency that made them form the band over a decade ago. As Doherty put it: “We were so desperate to do something. We couldn’t quite put our finger on what it was but it was something to do with performing songs, and we were kind of falling over ourselves to do it. It all got so messed up. But looking back on it, we actually did produce things that we’re all so proud of. I’m dying just to play some of them songs with the boys.”

So play some of them songs with the boys he did. If the press conference was oddly tense, the band’s short set brushed aside all traces of cynicism and converted every soul in the building into a hushed, awed romantic. They opened with a cover of ‘Georgia On My Mind’ which ran into ‘The Good Old Days’, a rather neat riposte to accusations of nostalgia. By the time they got to ‘Music When The Lights Go Out’ and ‘Can’t Stand Me Now’ even the most jaded of hack was spellbound. For those of you keeping score, they also played ‘France’, ‘Death On The Stairs’ and an “old Liverpool song” called ‘Sally Brown’ with a bearded gentleman named Rabbi John. Later on, after the ambulances had taken the last few tabloid hacks away to treat them for emotional shock, I grabbed Doherty for a quiet chat while the TV crews from Sky and Channel 5 squabbled over the band. “Drowned in Sound? Why do I know that name? Oh…you slagged us in the early days!” he chided me. “I assure you, Peter,” I replied, “it ain’t me you’re looking for.”

His eyes were like saucers, but in person he’s much more softly spoken than in front of the massed ranks of Her Majesty’s press corp. I ask him whether he thinks there’s more to this band getting back together than just flogging festival tickets after he’d admitted: “It’s hard to justify taking 150 quid of someone’s money to make them wander round from one sponsored stage to another sponsored stage”. He told me he doesn’t see it as “just a payday”, and added, in light of his tax bills, it’s “not even that much of a payday. Which is a shame.” He says all this with such open vulnerability that I’m inclined to believe him. “The Libertines are more than a band to me,” he says. “That’s definitely something that’s always been in my heart, and for Carl as well. I don’t think he would be doing it otherwise.” Which seems much more plausible having just seen him play his heart out while sharing a mic with Barat. Suddenly this all looks a lot less like hitherto acrimoniously estranged band-mates regrouping purely to accept a million pounds and loose change from Britain’s biggest festival company. It looks rather more like a band of brothers realising that their clock is ticking and that the time for heroes is now.