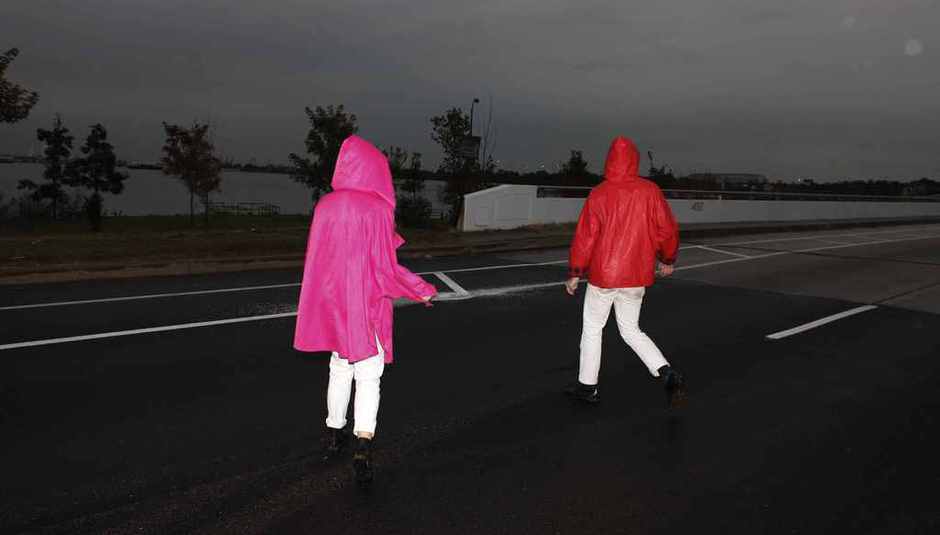 Beach House and Django Django win the red rosettes this week, while some predictably harsh words are doled out to Scouting For Girls and any band who decide to ruin Animal Collective's 'My Girls'. Is this what the end of the world sounds like?

Don't be silly, everyone, it's only music!

Once upon a long time ago - but when exactly I’m not sure - I heard a lovely radio documentary about The Button Pushing Chords. And how to master them is to fast track your music into the hearts and pockets of record buyers like we. And I am sure Beach House must have heard it too before hoovering up the manual (if not swallowing it whole). Because only that can explain how ‘Zebra’ came to be blessed with minor key sweeps and changes of the sort that really do have you wrinkling your brow, and pulling the kind of bemused face tiny bairns sometimes do when you're not sure if they're going to bawl or giggle. It’s such a simple idea; to take the listener by the hand and for you to be swooned into following - even if they take you off-path, just like the bulbous-nosed boozers in the pub told you not to. And it looks a bit dark and devilish, like feeling out a cliff edge with your toes in the moonlight. Thing is, ‘Zebra’ really is one of those records that compels idiots like me to use words like ‘shimmery’ and ‘quivering - possibly even (lawks!) 'tremulous' - and I really do hesitate to use them. But it is all those things and remains delightful. One last thing. Do bear in mind that even though the dictionary does not say ‘automatically brilliant’ under 'Baltimore', that doesn’t mean we shouldn't recognize when its citizens get it right.

‘Wor’ begins with rumbling bass picks that recall Dick Dale’s ‘Miserlou’. This being a pretty ominous setting out of their musical stall, Django Django heap doom upon threat by adding sirens, helicopters and a barreling bassline. And then handclaps, which is where I start to think, ‘Come now, Django Django - if that really is and must be your name - this is too much, I will end up getting silly over you.’ I mean, this is before they start stabbing a piano with dischordant fancy, and singing like the Betas once did. Essentially, it all works, and I am happy to report they are as good as ‘Storm’ promised. This makes TWO properly amazing singles. Imagine!

Scouting For Girls - ‘This Ain’t A Love Song’ (Epic)

This week, there have been two occasions where the linguistic response to a disastrous situation seemed to be lacking somehow. The first came when I was listening to a married couple on Woman’s Hour. And she’d cheated on him with one of those ‘discreet affair’ websites that jelly-spined, irretrievably thick people use. Naturally, Jenni asked Him how he felt when he heard another man was putting his thing into his wife - and of course, I was baited to hear his reply after She had been so matter of fact and insufferable. Now, what he said was ‘uncomfy’, and this is where I started to despair a little. I mean, I tried to think of all the times in life when you might justifiably use ‘uncomfy’ to describe your state of mind – having a 24-hour tummy bug; ganneting too many roasties on Sunday; getting the middle seat on a plane. But none of them were ‘finding out my husband was sticking his thing into another woman and using a website to choose which one to stick it into’. Not a one. And then, here are Scouting For Girls - who, quite apart from being the worst band ever chosen to monkey up support for the tawdry Digital Economy Bill on Newsnight [although really everyone, was that not the most delightful own goal you ever saw?] – and they have a new song about having your heart broken. Donning my half-moon glasses, and adjusting my Hampstead Bazaar shawl, I turn to Roy. ‘How did you feel when she left, Roy?’ I say sympathetically. And he says – presumably of someone he, you know, actually loved - ‘Well Jenni, I’m a bloody big mess inside’. He uses the word 'bloody'. I mean, honestly. WHERE'S THE RAGE?

Think of something perfect. Now eighth it before squeezing it hard; as if you were trying to do to a kitten, that which would make it ‘uncomfy’. Take a sledgehammer to the windows of its majestic stream train, stamp mud into its twinkly carpets, throw fistfuls of mustard over its rarest, most delicious cakes. What Kinema have done here, is to write ‘BECOZ WE CAN’ with their fat, clumsy fingers in crayon, on a piece of paper. And then they have posted it, along with two shits, through the letterbox of the pearliest mansion in paradise. It really will not do.

A little bit of chiptune goes a long way, which is why ‘Think Think Think’ wins me over even though it is a slight little slip of a hand-sketched thing. Blessed with a similarly judicious use of glitch, young Peter manages to keep his eye on the prize - he wants to make a pretty pop song; he has made one - without it cloying or sticking like pretty things sometimes do. Overall, it is rather nice to see people taking noises usually slung in the box marked ‘novelty’ - and actually measuring them out properly with scales, rather than holding the bag upside down and it all tumbling out over the counter-top. Do-look-at-the-rota, it-is-your-turn, if-I-have-to-pencil-a-passive-aggressive-post-it-then-where-will-we-be, etc.

Owen Pallett is blessed with a voice of such calm sincerity and kindness, I automatically believe whatever he sings. And even if I met him, and even if he turned out to be a cast-iron bastard, still I would think this. The trouble with ‘Lewis Takes Off His Shirt’ is that despite a delightful title – it doesn’t really go anywhere; it is an exercise in staying in the same place. And though, granted, this place is one hundred times more interesting and beautiful than where most of us plant our humdrum feet, I’m not sure I want to remain rooted there for a whole four minutes. It pains me to say this.

Lawrence Arabia has a lovely ribbon tie; makes songs that sound like a more polite Mark Bolan; has a video that features lots of bits, jiggling about. It reminds me of going on camping holidays to France when I was tiny, when my sister and I would watch the people of the nudey beach from the safety of the sand dunes. We called them ‘Jimmy Wiggle Men’.

Wendy is on Twitter, here. She apologises most profusely for that line above about cliff-tops, moonlight and toes.

In Photos: The Hidden Cameras @ Brude...