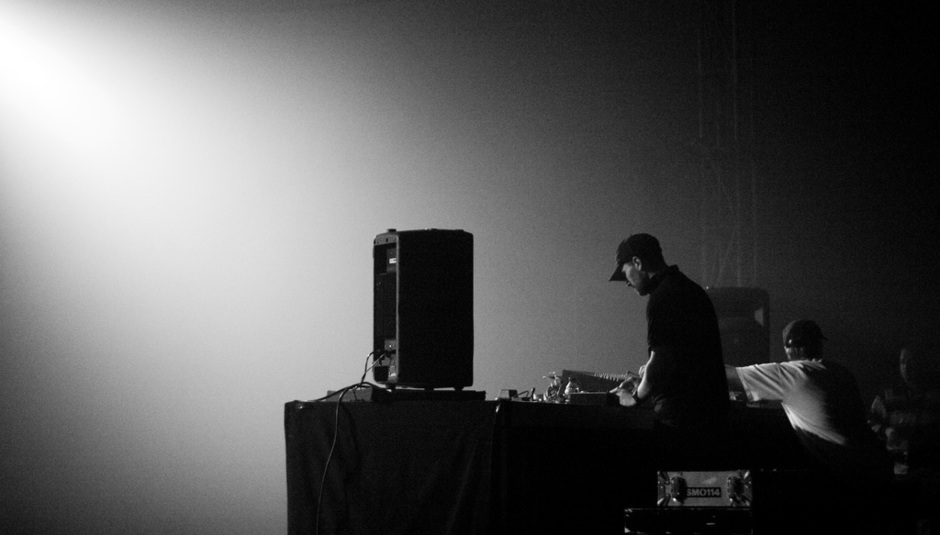 It feels prudent to get the negative points of this weekend out of the way first, for two reasons. Firstly, I don’t want you to go thinking I’m some sort of positivist, PLUR-reciting believer in a universal consciousness just because I rinsed my club feet to a bunch of woozy machine loops. Secondly, I do want to effect a turn of phrase that gets across exactly how wonderful the Bloc Weekender is. Once again, the three-day jaunt sold out its 5,000-ticket allocation, but if you didn’t go, you NEED to know why you missed out.

I don’t like getting to my chalet on Friday evening to find some douchebag lying outside cunted on ketamine and unable to speak. I don’t like people in sun visors (indoors) and Moldy Peaches shirts who stand up in the pub to sing the racist song about Ji-Sung Park that doesn’t scan. I don’t really like face-painting and head massages - although if you’re a functioning adult you have to accept at some point they’re not really hurting you. I didn’t like having steak on the top of a Greek salad.

And that’s it, really. Except the absurdly high quality of the lineup, and impossibility of seeing everything: that’s hatefuckable. The first thing I choose on the Friday evening is Roots Manuva, who is on at the same time as Wiley but 80% more likely to actually turn up. The first thing you notice is a guitarist, the only one of the weekend. It aids the Yorkshire demon-battler in delivering his woozed-out party-dub, and if he eventually does unleash the hits, DiS misses them in an effort to catch a bit of Nathan Fake, sounding more IDM-ish than anything. Fine as an aperitif.

Lindstrøm, whose latest album Real Life Is No Cool will likely remain a superlative favourite throughout 2010, is the closest I get to a disappointment on the lineup. Neither obscenely direct boogie disco, like much of that LP, or spun-to-space synth mega-epics of the sort he’s perfected in both his house and kosmische modes, it’s more like tasteful, slightly truncated space disco engine-revving that doesn’t really locate the necessary keys. ‘Baby Can’t Stop’ still bangs, though. Omar S, a Detroit DJ/producer of almost frightening singlemindedness, is at least as good as I dared to think he might be. He starts with a sole hip-hop track and then proceeds to peel house music back to the basest elements, tweaking components and highlighting what lesser jocks, and lesser sound systems - once again, the Bloc main arena sounds beyond belief – would have missed.

Ellen Allien, Berlin’s baroness of ultramodern minimal, is almost as good. The visuals in what is supposed to be an A/V set are nothing to write home about (this is a recurring theme with acts that have them, to be honest), but her forays into neo-techno sleekness still fulfill their function. DJ Rush, in Tec:Bloc (that’s Crazy Horse) is just too much to handle for more than 20 minutes. I know he and Chi-town techno types in general like to crank it a tad but this feels like being submerged in girders. Thereafter, shiny tech-house from Lee Curtiss until about the time the alarm on my phone went off. Damn.

Nice day, Saturday. Feels wrong to venture into a dark room and get kicked around by sadistically loud basslines, but Loops Haunt (a wonky dubstep fellow from Dundee who I know nothing about but am taken with) and Peverelist b2b Appleblim (Bristolian edge-dwellers in the steppers’ movement, letting their UK funky fandom shine through in this set) are honoured by DiS’ presence. The next few hours are kind of a blur of dashing between stages, missed connections, regrettable clashes and Salt N Pepa doing not very many songs but nevertheless going beyond the ‘Rolf Harris, Glastonbury, Sunday 4pm’ status that their booking looked a shade like initially. Less inherently populist, Flying Lotus’ crashing rewirings of each of hip-hop’s known permutations are yet more gleefully sucked down. As for Autechre, or what I (we) see of them – what other festival would have these guys playing in the dark when their granular electro-break microassemblages are ‘nuff of a headslice as it is? Their latest Oversteps LP shows they’re not easing off the trigonometry two decades in; likewise this hour.

A dalliance with the camp, tinted windows electro-tech of Alden Tyrell is a neat way of preparing for Birmingham’s Surgeon, in that the latter is dancefloor-savvy while keen to ride the knife edge of techno evolution. Thus, dubstep’s ravier doyens (Zomby, for one) mingle with Berlin brutishness and Chain Reaction-y infinite echoes. Pretty impressive, maybe as much so as ducking out into ragga-jungle legends Congo Natty’s set for a bit and immediately being deafened – by an a capella section. It’s insanely loud and sweaty and so is the audience, but once Natty’s done with their definitive ‘Junglist’ it seems sensible to scarper. Which leaves only Planetary Assault Systems, aka Luke Slater, aka 85 minutes of some of the best techno I’ve ever heard. Dotted across wax since 1993, his productions are warmly regarded among the Jeff Millsian/hard loops set, but this... it’s a tactile diamond, emotions that psychoanalysts forgot to categorise, soccer-thug fist-pumping in a crowd who, dammit, must be great people because they’re here, right? Best not try and top this, eh.

DiS is sadly compelled by the realities of jobs and that to leave early on Sunday evening, thus missing Derrick May and Skream & Benga among others. Before that we chow down on Kelpe, a peculiar marriage of deep disco and IDM, in the Dome (a big tent near the arcades), the Channel One Sound System – Jamaican selector Mikey Dread playing ace crackly dub reggae and taking the piss out of people on the mic – and, sending us off winningly, Raffertie v Kanji Kinetic. I met Raffertie during a Saturday morning constitutional to the beach and he tried to give me some cider I didn’t want. Today, him and his pal play insanely OTT cartoon thug-bass jumpupgetdown tackle that’s sort of like the happy hardcore of ‘wonky’ (is it still called that?). It’s pretty weird how wanting to go home a lot can feel so much like not wanting to go home at all, I’ll tell you what.