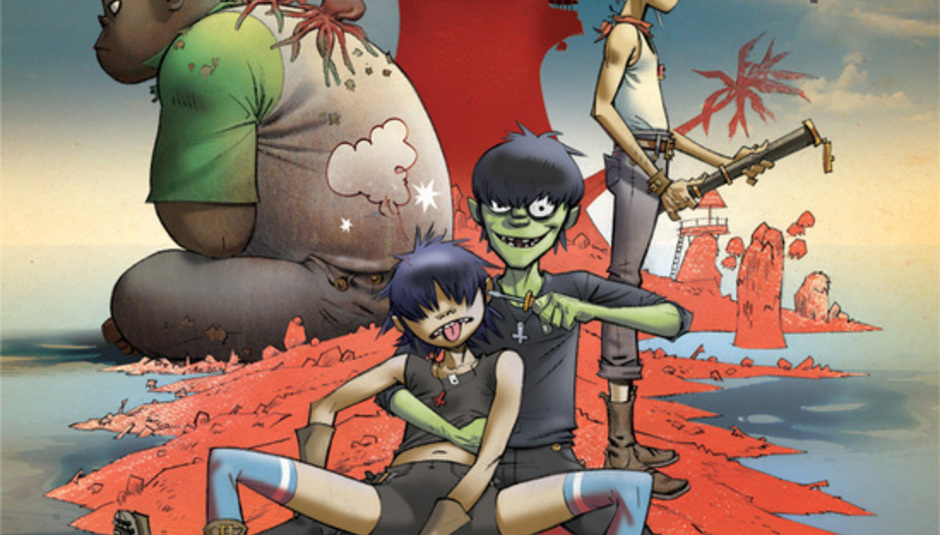 Gorillaz' forthcoming third album Plastic Beach is a kaleidoscopic and typically adventurous affair. Damon Albarn... sorry 2D, and co (sigh) invited DiS to visit their 'secret floating island deep in the South Pacific' last month for an exclusive first listen of the album, as well as take a look around the huge model display of the beach - 'made up of the detritus, debris and washed up remnants of humanity' - itself. Here is a track by track guide of what to expect from the album when it is released on March 8th.

Does what it says on the tin. The mood is set to the sound of ocean waves lapping against the shore offset by grandiose string arrangements amidst the sound of seagulls flapping their wings and crowing. The listener is now transported away from civilisation and onto Plastic Beach.

'Welcome To The World Of Plastic Beach'

If there is anyone you want to greet you in a strange and unknown world then let's be honest, Snoop Dogg ranks pretty highly on the list. Making the first guest appearance of the album, Tha Doggfather acts as a master of ceremonies, helping you off the boat and onto the sandy shores. Set to huge sub bass and stabbing synths, Snoop’s laidback flow is a bold and confident way to start the album.

If Snoop is the wise old veteran, then this is the track where we meet his unruly kids. Despite featuring two forgotten men of UK hip-hop in Kano and Bashy, ‘White Flag’ is a stand out track on the album. Similar in tone to Gorillaz previous work on ‘19-2000’ the song has a childlike freedom to it and is aided immeasurably by the Eastern flourishes provided by The Lebanese National Orchestra For Oriental Arabic Music. A future single perhaps.

The first time we hear 2D’s vocals pushed to the fore. After Albarn’s glorious sojourn into his past last summer, tracks like this are a reminder of just how forward thinking the man can also be. Fuzzy and distorted vocals mix in with a nagging electronic loop as 2D sits alone like a “A scary gargoyle on a tower” singing to nobody in particular. Plastic Beach originated when Gorillaz creators Albarn and Jamie Hewlett wanted to explore the melancholy that runs through all great pop music and this is the perfect juxtaposition between maudlin and melody.

The first official single, ‘Stylo’ features the laidback rhymes of Mos Def and the demented caterwauling of Bobby Womack. Like most of the album so far these voices and characters (Mos Def runs the arcade on Plastic Beach) tell their stories amidst layers of electronic haze and a pulsating groove. It could be said that this song features one voice too many and lacks a definitive Gorillaz identity, but who you would ask to leave is a difficult decision indeed.

Starting up with a commercial for Plastic Beach’s own microwave breakfast cereal, ‘Superfast Jellyfish’ soon gives way to De La Soul kicking it with Super Furry Animal’s Gruff Rhys. Fun and frivolous, this song boasts the album's catchiest melody, though it doesn’t add too much to the record's overall feel.

It’s an oddity, that given the volume of cameos on Plastic Beach, it is only when 2D’s vocals are solo do you truly feel in Gorillaz' company. Another melancholic number, ‘Empire Ants’ is an introspective and lonely moment of isolation before the introduction of Swedish/ Japanese band Little Dragon. Being a relatively unknown voice amidst a sea of stars helps singer Yukimi Nagano blend into Plastic Beach’s narrative and together with Albarn carve some beauty from the chaos.

If you only remember one thing from listening to Plastic Beach, it will be Mark E. Smith’s opening line as he asks “Where’s North from here?”. A rush of images flood to your head, imagining the truculent Fall man looking for a bookies and a quiet pub amidst the Technicolor beauty of the island, perhaps angrily quizzing Snoop on how to get back to Manchester. Any fans hoping for ‘Glitter Freeze’ to be another Shaun Ryder on ’D.A.R.E.’-esque moment of pop genius however will be disappointed though, as Smith ultimately takes a back seat on this one. Droning synths create a sound akin to Fischerspooner’s ‘Emerge’, though Smith does deliver his contributions with inimitable charisma, topping things off with a maniacal laugh at the end. This is a dark and industrial angle to Gorillaz not previously seen.

'Some Kind Of Nature'

The stars just keep rolling in as Lou Reed arrives over the horizon to have his say on the state of the Plastic Beach nation. Set to a bouncy pop rhythm that could double as a kids' TV theme tune ‘Some Kind Of Nature’ sees Reed and Albarn comparing things they have found on the island. Plastic Beach is, apparently, a place devoid of technology and all that exists is the detritus of the world's plastic content. A bemused Reed tries to make sense of this new environment talking about how everything is “Some kind of metal made out of glue.”

'On a Melancholy Hill'

Further proof that the purest moments of this record lie away from all the guest spots. A simple melody and arrangement demonstrate that sometimes simplicity can be much more rewarding that the complications too many outside influences can bring. It’s ironic that this album's one hindrance actually parallels its underlying concept.

For the first time 2D’s vocal is free from distortion and studio trickery. As a result we get another great Gorillaz pop moment, if perhaps not one entirely necessary on what is a fairly lengthy album.

Arcade-running Mos Def returns to follow up his slot on ‘Stylo’ here. Of all the rappers on Plastic Beach it is Def who impresses the most. His flow is second to none and whilst he isn’t as recognisable as Snoop Dogg, it’s tracks like this which show why his 2009 album The Ecstatic was so wrongly overlooked.

We’re more used to seeing Mick Jones in cahoots with Pete Doherty these days, so it’s nice to hear the Clash hero working with people more coherent and together than the Babyshambles man. Alongside his former band mate Paul Simonon, Jones helps make this one of the oddest parts of Plastic Beach. Bleeps and glitches slide around creating a psychedelic atmosphere on which Albarn’s love for repetition combines to create a suitably cartoon-like atmosphere.

Lining up alongside Little Dragon again reaps major benefits for Gorillaz. The sultry and seductive female vocal sashays around an unusually retro sounding musical backdrop. Electric organ and harps flirt with each other creating a heavenly atmosphere but none of this peace is rubbing off on 2D as he sings “My heart is in economy due to this autonomy.” The poor little monkey certainly is a sad sack.

A beautiful moment of twilight beauty courtesy of Mr Bobby Womack. It’s a testament to the strength of Plastic Beach’s visual imagery that you can really imagine all the tracks here happening inside a world that is, to all intents and purposes, entirely fictional. This lush and soulful vocal from Womack is pure class.

The album goes out the way it came in with seagulls screeching and the same stabbing synth sound Snoop Dogg rolled in on waving us goodbye. The eco-minded will love this album and its environmental message, especially here when 2D sings, “It’s all good news now, because we left the taps on for ten whole years”. Sailing away from Plastic Beach you wonder what will become of the place and whether we will ever hear more from its inhabitants. But there's not denying that the tales and characters which make up 'the most deserted spot on the planet' are both entertaining and unique.

Plastic Beach is released via Parlophone on March 8. Stay tuned for our full review - courtesy of Wendy Roby, no less - next week.