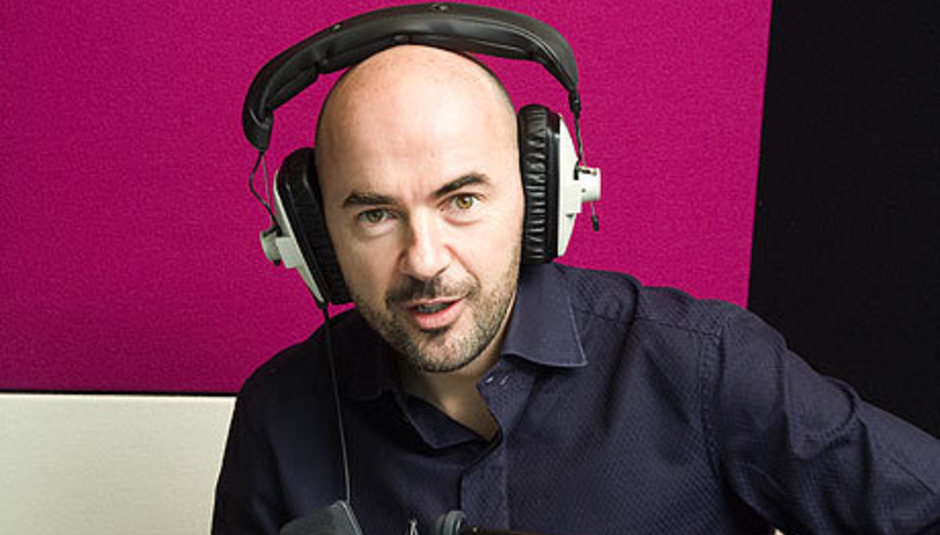 He’s probably most famous as the dessert-wielding presenter of Channel 4’s Football Italia (RIP), but these days James Richardson’s punnery and droll analysis of football from around the world can be heard on The Guardian’s excellent Football Weekly podcast.

On Football Weekly the conversation frequently turns to music, and with (unconfirmed) rumours abound that James Richardson was spotted at a Yeah Yeah Yeahs gig recently, I’ve often found myself drifting off into semi-homoerotic reveries where me and James discuss music and football, finishing off each other’s tiramisus.

So I thought I’d put my audacity to the test, abuse a useful contact (thanks, Will) and approach the great man himself. And whaddyaknowit! Despite my well-documented Paxman-esque reputation, while also being in an indie band that sits firmly at the SO not cool end of Rock’n’Roll, James was happy to risk his journalistic, and personal, integrity and indulge me and my idiotic questions. In fact, the only other interview I could find with James was with Small Talk in 2003, so this feels like quite a journalistic coup for me: this is my Martin Bashir moment. Enjoy.

Hello James, how are you?

I noticed on the Football Weekly podcast that the conversation often veers onto the topic of music, so I thought it’d be nice to give you the chance to discuss it. Who would you say are some of your favourite bands?

Excellent, you have fine taste. Apart from that Lost Cappuccinos lot. Do you tend to go to many live shows at all? Any particularly memorable/inspirational ones you can think of?

AC Newman at the Luminaire last year. The National in Montmartre – in, y’know, France!

What would be your Desert Island Disc?

Huh? I’d rather not take any than just take one. If it was your favourite, you’d end up hating it. And if it wasn’t, why take it? Unless it was something by, say, Duffy, and you just wanted 1 less copy in circulation.

Poor Duffy. As we’re still in the wake of yearly lists etc., were there any records that came out last year you particularly got into?

I can remember Barry Glendenning [from Football Weekly] saying he went to an AC/DC gig last year and I think he referenced a Super Furry Animals song in the Fiver recently… do you know what sort of music everyone else at FW is into?

Well, I promise not to tell anyone. Do you have a preferred format to listen to music on? Do you collect vinyl at all, or have you embraced the digital world with open arms?

I’m so glad I got to experience one of your puns first-hand. Do you play any musical instruments? Ever been in a band?

No, and consequently no.

You spent a fair while in Italy and are generally known as a bit of an Italophile… did you discover any Italian pop bands out there that you like or can recommend?

I’d wholeheartedly recommend Prozac +, and their song ‘Acida’. Lucio Battisti, and some Luca Carbone. And, of course, Antonello Venditti! He’s the master!

Lovely, I’ll be sure to check those out. The only opera I’ve been to was in the amphitheatre in Verona, and it was fine for the first couple of hours. Did you develop a fondness for classical or operatic music when you were in Italy? Have you been to La Scala at all?

Excellent. An interview with Small Talk revealed your love of pasta con vongole, which is also my favourite. Do you think there’s any chance of us becoming bezzie mates?

Yes. Would you like to try my wife’s clam sauce too?

I’d love to; I’ve heard it’s very tasty. Oh, hang on… Ok, I find Football Weekly genuinely insightful, and with Jonathan Wilson’s articles and recent book it really seems to have drawn attention to the shoddy standard of football punditry in general. Do you think there’s any chance of Jonathan Wilson replacing Andy Townsend?

That’s a beautiful thought – would we get Andy in the pod then? Game on!

I remember you featured on some of the earlier Pro Evo computer games, and when you weren’t on the next edition, I had this image of you drunk and unshaven, cursing your replacement on the game, playing it on mute and adding your own commentary… presumably that wasn’t the case, but are you much of a ‘gamer’ at all?

A bit. I find it hard to put games down, so when I met my wife I gave up rather than scare her. Now I get to play some Pro Evo with my son who doesn’t frighten easily.

Do you have a favoured Premiership team, or is it in your interest to stay vague, mysterious and neutral?

You can’t buy vague, mysterious and neutral in shops can you? I’m hanging onto mine.

Very sensible. At the risk of going all ‘Smash Hits’ on you, are there any footballers that you could imagine making the switch to the music world? I’ve seen a video of Ronaldinho playing bongos; Tevez’s band on Myspace; Mutu seems to be well-versed with rock’n’roll’s extra-curricular activities, and I also heard something about Ashley Cole sampling ringtones. Who would be in your Fantasy Football Band?

I heard Ashley usually has it on vibrate, but possibly I misunderstood… Phil Brown on lead vocals. Rio would be in there too. Jamie Carragher could perform Bez-like dances. Jimmy Bullard in some tight trousers with a tambourine.

I would pay good money to see that live. The Ashley Cole thing, that is. With the help of, most recently, Rio Ferdinand, Ryan Babel and Clint Dempsey, football seems to have a developed a rather awkward relationship with music. Have you met many footballers that were particularly big music fans or renowned for their taste in music?

It’s a little known fact that Paolo Maldini liked rap, and even hosted his own rap show on Milanese radio 105.

Amazing. While we’re in the zany realm of Smash Hits-esque interrogation, I feel like I should ask about those desserts that accompany your camera pieces. Who picks them and who gets to eat them?

They were a job lot from a latex factory in Leicester. Some are still hanging around somewhere I think.

One other thing that often crosses my mind while listening to Football Weekly is that you seem to be able to hear the inside of Sean Ingle’s dry and sticky mouth whenever he speaks. As an aspiring recordist, is there a special mic or mic technique used on him to achieve that?

Yes, only ProducerBen and ProducerPete know the secret, and they’re not allowed to fly on the same plane either.

I promise I’m not stalking you, but I noticed that you have a Twitter account that you rarely seem to use. Do you have no desire to become the Darren Bent of the football punditry world?

Not much. Twitter’s pretty silly really.