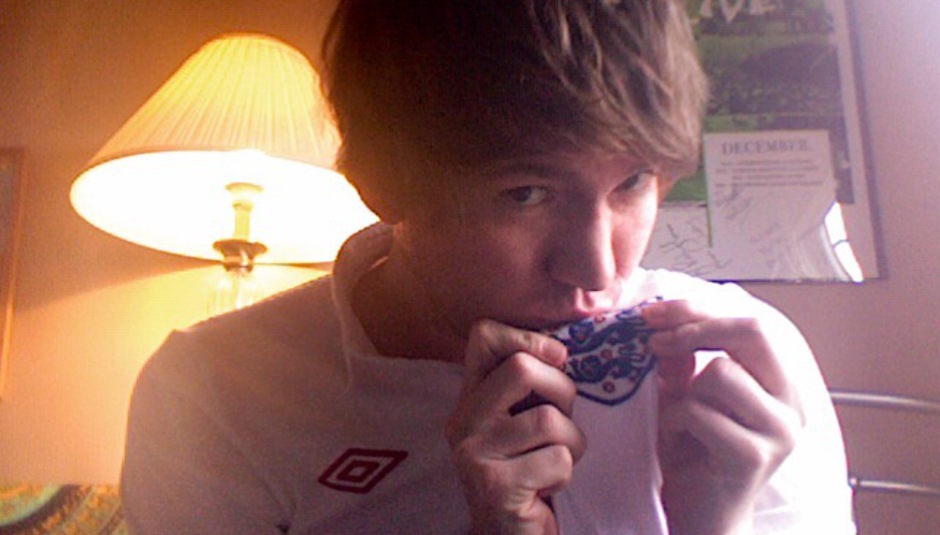 I can't remember ever feeling so low as I did on the evening of 30th June 1998. Twelve and a half years old and devoid of a sense of perspective, in little over two and a half hours I swear I went through every human emotion. And as my Dad walked me back from the pub, up the hill to my home, I'm pretty sure we both sobbed. Me more openly than him, and I'm sure he'd have pretended his sadness was due to mine, but it was a lot more transparent than that. England were out of the World Cup, the first World Cup I properly experienced. Charging kids 50p to huddle round my 1.5" portable TV screen in lunch breaks. Skiving school for the first time to watch England beat Tunisia. Making my own wall charts to track results, because the ones that came with the daily newspapers simply were not detailed enough. My dad shushing me when I joined in with chants declaring things about Romanian people that I didn't understand.

And then the next morning, the World Cup had the cheek to carry on. Like the girl you're head over heels in love with leaving you and parading her new relationship in front of you. I thought this was forever! We were meant to be together, everybody told me so.

And now, every two years I go through the same horrible divorce.

I've seen bands I love play awful shows. I've bought records that have disappointed me beyond end. If I go to a gig and I'm not enjoying it, I won't force myself to stay; but when I go to watch Welton Rovers every Saturday (as I've done the past 15 years), I could be watching the most diabolical game I've ever seen (I often am), and you couldn't drag me away. Bands, they come and go, but when you choose a football team, that's a life sentence. I asked some friends to share their misery with me.

Hello. I am Paul from Dananananaykroyd and I support Celtic. My career as a Celtic fan is one often tainted by glorious failure. Having had to sit through nine seasons of our arch-rivals winning the league during the '90s, you think Celtic fans would be used to feeling low, right?

Well, on the 21st of May, 2003, I experienced my most gut-wrenching episode as a Hoops fan: The UEFA Cup Final.

FC Porto, then managed by Jose Mourinho, had a pretty big reputation but had progressed to the final by beating pretty easy opposition (except for Lazio who, ironically, they absolutely pumped) whereas Celtic had defeated Blackburn (back then a mighty team), Celta Vigo, Stuttgart and, incredibly, Liverpool before edging Boavista in the semi-final.

A lot of my pals travelled to Seville for the match. My dad and I did the next best thing: flew to Dublin to watch it with my die-hard Celtic-supporting uncle.

Porto looked good. They had Deco, Maniche, Ferreira, Carvalho and Derlei. Didn't matter. We had Henrik Larsson. I honestly thought we could do it. So did thousands of others.

The match itself was constantly on a knife edge. Porto, cheating arseholes BTW, took the lead right on half time. Unbelievable. We'd pretty much matched them thus far. Didn't matter. 2 minutes into the second half, Larsson headed us back into the game. Porto took the lead again a few minutes later, but King Henrik scored a second equaliser. It ended 2-2 and we faced extra time.

I can't dwell on this because it still hurts! Our much-maligned centre back Bobo Balde recieved his marching orders which effectively killed the game. Derlei scored his second goal and Porto's winner. We couldn't pick ourselves up after that. To make matters worse, Rangers won the league that season by a single goal.

Tears, misery, gloom, doom and disbelief. I'd personally like to thank Gareth for reawakening these dreadful memories.

I've only ever visited the Guangzhou Olympic Stadium twice. The last time I was there was as a special guest at the opening of the Guangdong International Tourism and Cultural Festival. The grand finale that night was Jackie Chan singing a Cantonese power ballad whilst standing on the back of a gaudily-decorated articulated lorry.

My first time was as a spectator at a World Cup qualifying match between the People's Republic of China and Hong Kong. The build up to the game was ominous. A carnival atmosphere gave way to angry protests the closer we got to the stadium. Upon investigation, the protest was aimed at the fact that Hong Kong - a part of The Motherland - dared to have its own international football team.

I bought a bright red scarf with the words 'FIGHT FOR THE MOTHERLAND' emblazoned on it. On our way in, my scarf was confiscated. I'm still not sure why, but I can only assume the security guards thought I might use it to fashion a noose in the event that The Motherland should lose the match against a team from a territory with population 200 times smaller than its own.

PRC needed to win by a margin of eight goals to have a chance of going into a play-off against a team from the Middle East. Needless to say, Hong Kong played like a pub team, but managed to hold on for a 7-0 defeat. Bummer. And I didn't even get to keep my scarf. As a Sunderland-born supporter of Man Utd (stop laughing, me dad’s a manc), I’ve often felt the need to wave my season ticket in the face of anyone who’d sneer ‘glory hunter’ at the news of my allegiances. But as far as ‘terrible’ moments are concerned, most have occurred outside of Old Trafford. Possibly the unjust defeat by Arsenal in the 2005 FA Cup Final, or the 1995 Cup final defeat to Everton? Nah. The lowest ebb I can recall is going down 3-0 to Chelsea at Stamford Bridge in April 2006. It had everything I didn’t want.

First of all, and the most devastating for sure, was that Chelsea sealed the Premier League with that victory, adding insult to injury by getting to lift it in front of their closest rivals. Secondly, they played Utd off the park - it wasn’t a contest. Third, Rooney broke a metatarsal under a bad challenge from Paulo Ferreira and became a doubt for the World Cup. Even Carvalho scored a screamer. I even got into a row with a Rastafarian gentlemen after the game, trying to defend the indefensible, but in the end I had to admit, Chelsea were looking good, and Utd were in desperate need of a facelift.

It's Wembley, 26th June 1996 , 7:30 kick off for the semi final of the European championships. England vs Germany. I, however, were at home. In front of the tele with my England top on and my collectible squad of Corinthians models in from of me, with enough Um bongo in the fridge to make any 11 year old feel like they were in the Congo.

We played footy outside all day in the baking sun and when the match kicked off it was still light outside. I remember because next door were having a BBQ and lots of people round to watch the game, but I wanted to be alone so I could concentrate.

Shearer scored in under 5 minutes I was ecstatic surely this was the game were we would defeat the old enemy not Long after that Kuntz scored for Germany a bit deflated but still full of hope I was glued to the screen, I remember heart in mouth moments like Anderton coming close and Gazza just not having a long enough foot to turn in a cross. I endured it all, every single kick…..then penalties.

My earliest memory of penalties would have been 2 years previous when my then favourite player in the world Roberto Baggio missed against Brazil to give them the 1994 World cup. But this time it was different. A semi final in our country with a chance to go to the final as certain favourites after already destroying the Spanish and Dutch…

To sudden death: Gareth Southgate, GARETH SOUTHGATE I though to myself, oh well come on Gareth. He steps up…its weak it sort of in the middle it's… it's… it's SAVED. Oh god I thought, if they score here we're out...Andreas Mullor puts the ball down. Steps back a few paces then WHACK. That’s it we're out…….then followed the first moment football and music really moved me. As Des Lynam said goodnight there followed a montage of England’s best moment during the match. Til now I’d held back the tears but when Cast's 'Walkaway' came on accompanying the montage I burst into tears. I was devastated, hurt, heartbroken a football fan for life. The main problem with the distance between my hometown and my team is that, aside from continually being called a glory supporter, opportunities to see Arsenal play over the years haven’t been as frequent as I’d have liked. My Dad always did his best to get tickets for a couple of games a season as I was growing up but unfortunately this was usually for the (not-quite) glamour ties against the likes of Bolton. I think I’ve seen us lose at the Reebok Stadium maybe 3 times.

So, with that setting the back drop, a disappointing memory as an Arsenal fan was getting the chance to go see the Arsenal play at Highbury against Leicester but having to sit with the Leicester fans. As I’ve already said, in the past I was lucky to get a 1-0 defeat so to see us go 3-0 up before half time and go onto eventually win 5-0 whilst not being able to celebrate a single goal was gutting.

Aberdeen's first team came through to Stonehaven once for a testimonial (cannot remember who it was for, but I've a feeling it was some sort of linesman). Talk of the (primary) school all week. My Mum bought me an autograph book to bring along. Left it at home, so borrowed a napkin off of someone.

Billy Dodds is sitting in the (really dilapidated) dugout, which is at the other side of the pitch to where I was standing. See some kids approach him, he takes his water bottle and SOAKS them with.

I'm left with a huge dilemma. Do I risk my napkin getting soaked? The embarrassment of getting soaked (I was quite a shy and nervous child)? I decided not to.

Until, that is, that a group of people thought they'd brave it. I sheepishly followed, and proceeded to get soaked. Didn't get the brunt of the water, thankfully, and my napkin was safe in my jacket.

Anyway, this is why I'm quite glad you don't see Billy Dodds on the TV anymore. He's a total prick.