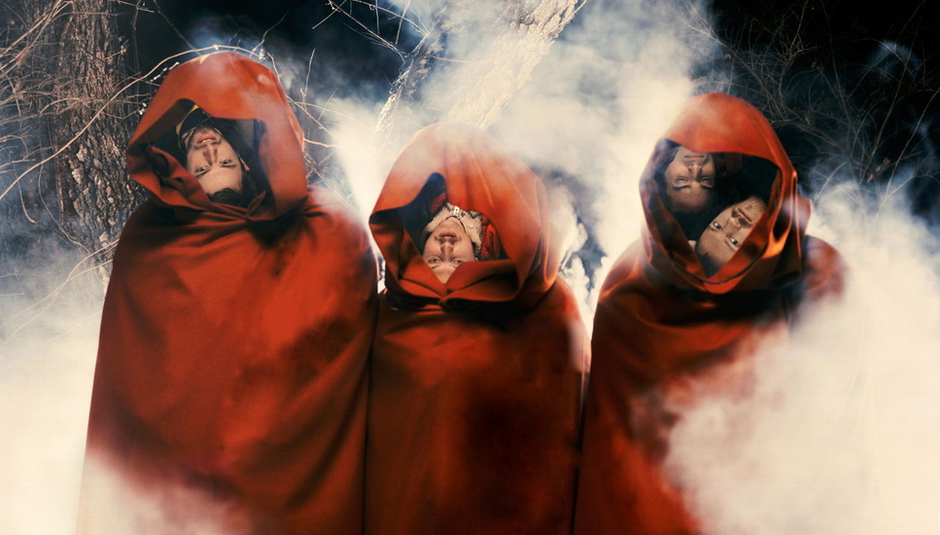 This week the music industry goes Back to School – so while These New Puritans, Yeasayer and Maps (fourth years, dripping with swagger), Madness (Upper Sixth, if not Head of History, very definitely Senior Prefects) all dust off their favourite novelty erasers and sharpen their pencils - new signings Standard Fare are busy drooping themselves into new schooliforms what are that little too big and roomy; making them seem even fresher of face. They grow so fast, you know.

OBLIGATORY CAVEAT: I don’t care if it is only week two and I am cheating already. If I want to show an unfair and sick-making favouritism to two singles in this week’s class, I bloody well will. So we have two winners. Any more noise and you can forget about going to Beaulieu Motor Museum. If someone had bothered to tell me These New Puritans were going to do an emo re-work of 'Get Ur Freak On' I would have put it on my pod as soon as it fell out of the jiffy bag. I may even have licked the modern magic plastic it came on. And rung up Timbaland and said at him 'Why have you become a woefully parodic, mugging face-puller when you used to be a genius pop person, despite the fact that I quite fancy you when you do your cheekyface 'bit'?' I mean, someone should tell him. And someone should ring These New Puritans, and ask them to do more seven and a half minute epics that have middle eights with muted trumpets that really do remind me a little bit of Cake's 'The Distance' (and yet are not dread), and perhaps mention while they are there that if you listen to this while in a suburban supermarket, it really is exciting. There I was readers, deli aisle. And all-a-sudden, while 'We Want War' continued on its melodram way, when that black-coated kiddiewink who should have been the last word in hormone-tugging cuteness - well, he had a definite look of the Damiens about him. And I swear he was following me, but that might just be the compound, post-Christmas, booze-guilt talking. Popera of the very very best kind, and quite MAGNIFICENT in its grand old bigness.

I’m not going to lie to you readers, I went on Yeasayer’s website and it put the willies right up me. So much so, that I decided I needed to be on it sans headphones; settling for the tinny aural plop that are my macbook speakers. This made it much better to look at their genuinely unsettling portal, even though - on the plus side - it has arty tits on it. And I believe we have talked about this important (i.e. not) distinction before, but it bears repeating; tits are alright in indie if they are a bit arty, and Yeasayer’s tits are on naked peepul dancing a la Wicker man, in some sort of quarry, so they definitely qualify. ALSO, they describe themselves on MySpace as ‘Enya with bounce’ – which is about as close to genius as it gets in my divvy book. As for ‘Ambling Alp’ the record, the thing, it begins with watery doom, tonky noises that sound like glockenspiels but odder, it's got a wondair Talking Heads brass section on it, and when the vocals go up 3 octaves it soars, it is a cautionary, Werthers Originals, Song To Your Offspring about 'sticking up for yourself', it really is genuinely stick-your-arms-up-don't-stop-to-think-if-you-look-like-a-moron uplifting anthem, and - AND - it is a proper all-out, unembarrassable pop song. One, NOBODY TOLD ME THEY MADE POP RECORDS. Two, I ACTUALLY CLAPPED THE STEREO. Very close runners-up Standard Fare begin their single doing a bit of a boo hoo. ‘You’re only fifteen, what was I thinking?’ they wail - and it really is paedo pop of the sort all right-thinking people should condemn. So it is with not a little regret that I tell you how, even though it is both sick and wrong and reprehensible, it’s also the catchiest little fucker since fish swam down the river Trent with big Eat Me signs on their arses, all mouths agape; helping the hooks in with slippery fins. It is perky, it jangles, it doesn’t break any genre rules (but – crucially – you don’t mind), it has a clarity of tone that would shame the Society for the Protection of Nice Grammar & Speaking Proper. And it is just over three minutes - which makes it conventional in the very best sense, and which also means it does not outstay its welcome, however hard you might try to convince it to stay until the snow has cleared. To give Standard Fare credit, they have written a whole song about wanting, needing and waiting for their peskily tempting indie Lo, and they don’t appear to have succumbed, because they sing about how ‘this isn’t right’. Although there is a hint that she wants 'it' right back – and a horrid inclusion of the fact that This One drinks - when as we all know, drinking is not ever never a mitigating factor in The Sex. And because hobviously our pop protagonist is a massive nonce who really ought to try GOING OUT WITH SOMEONE THEIR OWN AGE. Mainly though, I think they get away with ‘Fifteen’ because it sounds like a girl is singing. And as we all know, it is less pervy for girls to perv on young boys than the other way round. That is a legal fact and everything.

I’m not sure why James is being such a tease. I mean, I wrote a whole thing on just how wonderful ‘Without You’ is on my actual blog for actually no money at all - so quite why he is not releasing it entirely for my benefit is not clear; it is uncommonly vexing. As it is, for the release of ‘Die Happy, Die Smiling’ we get a treat in the shape of an instrumental version (for those of us who want to have a specific pash on the twinkliness), and a ‘proper’ one for those who want to work out if this is a nice song or a nasty one (my internal jury are still arguing about this and are having an extended weekend lock-in and there is no Henry Fonda to sort it all out satisfactorily). It won’t surprise anyone to learn that I am still loving on nearly all Maps' output in quite a big way. And, to qualify, that is darts player big and fat - even though even I will admit the lyrics on this single could do with a bit of a prune. Or at the very least the advice of the Gardener’s Question Time panel - but not the one who is always recommending alternatives to pesticides, cause he gets right on my tits. CHEMICALZ ARE BAD, MAN.

My sister recently suffered a whole six hours of Death by Madness – which is what happens when you are stuck in a car jam on the day after Boxing Day with only one CD to entertain your passengers. So it is of course to Madness’ credit that they still loaded up The Liberty of Norton Folgate for the journey home, because if it had been total balls they would have preferred silence - or at least the witterings of my nephew because kids really do say the funniest things. I have the album too now – mainly because I like to copy other people’s record collections and because it isn’t enough for me to get sent free records; I want The Industry to go all wrinkly in a ditch, like ET. I don’t just want to kill music, readers, I want to rip off its head and shit down its neck because as some wise cat once said, if a thing is worth doing, it is worth doing well - and I like to think to think that borrowing what I am not sent and then ripping the shit out of it has a nice, Going the Whole Hog whiff to it. And this makes me think about cassette tapes that are turned over and over and over and how childhood car tapes come back to you many years later. And how, before you can help yourself, you’ve a hearkening for wintage Elton John if only so that you can sing Wenny & The Jets – especially the bit at the end when it goes a bit mental. Or - Good Lord - Wings. A hearkening for Wings everyone! As for ‘Forever Young’, it is just so very, very, very odd for me to be hactually thinking ‘Oh. Lily Allen’ - when obviously this notion is so very screwy, I might have bought it in Wickes. Anyway I love Suggs, I think he seems like a thoroughly decent, comfortable and admirably well-adjusted cove. So I hoovered up their bottomless amiability with glee; like a waifish model confronted with a small mountain of naughty dip-dab.

Active Child - ‘She Was A Vision’ (Transparent Records)

Extremely pleasing waft-keyboards and a drumbeat like-the-one-off-of-Vienna-sept-dulled-down-a-bit make ‘She Was A Vision’ a perfect little shit of a thing for taking out walkies at night, in the snow. So I did, and utterly and completely enjoyed myself. More here.

Fan Death’s previous, dizzying disco excursion ‘Veronica’s Veil’ feels like a bloody long time ago – and whether this is one of those time-based quirks where I think it has been ages because A Lot Has Happened to one – or, that it really was a long time since its release I am not sure, and I can't be naffed to check. And it’s not that ‘A Coin For The Well’ doesn’t have its very own seriousface - and yet at the same time cheeky - synth charm, but it is not as good as their debut might have lead me to expect. Also, I hate myself every time I write the word ‘synth’ and I want to love myself, it is what you are meant to do in order to become functioning and ‘whole’ and as well-adjusted as Suggs, up there. Damn you, pesky expectations.

This week’s heedlessly brash banger from the genre drawer marked ‘dance’ is ‘Party Animal’ - and a more pointless record you will not hear. It’s all a bit Club-Classics-90s-Edition, with shades of the sort of thing they used to play dahn the ice rink when that was the place to go and Bauer skates were about as wicked as it got. By which I mean, it really has got the air of Snap about it, and some meathead lyrics about how ‘the beat is gonna getchoo’. All that said, I would be a liar if I omitted to mention how I thoroughly enjoyed its forgettable charms - not least when Jammer tells us ‘if you got a boyfriend / Just DUMPIM.’ Mainly because it is a pop lyric further than when Destiny’s Child told we ladies to leave our men at home - and I respeck things what are taken to the nth-degree just for the sheer cheek of it.

Kria Brekkan – ‘Uterus Water’ (Paw Tracks)
Proper review here, by Will, who rather liked it. Terrible title though.

Fyfe Dangerfield - ‘She Needs Me’ (Geffen)

Wendy is on Twitter here. Although: CAREFUL NOW - because her Paw reads her ‘backchannel’ and if you are mean, he will see it. Apropos of nothing, he is built like a brick shithouse with spades for hands.