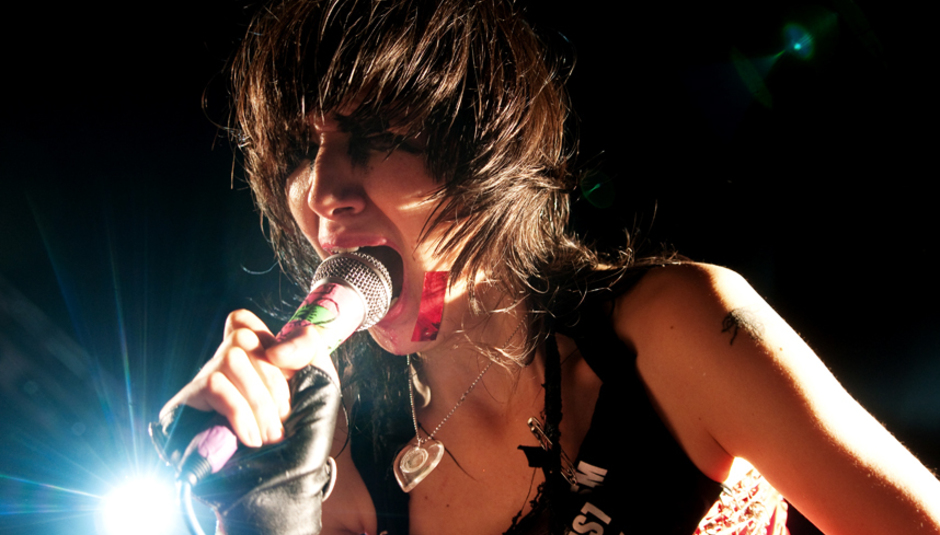 DiS had a mighty good time at Ten Years of ATP, despite not even knowing what ATP was ten years ago. We’re pretty sure everyone else did, especially Todd Trainer, who looked very confused to see the giant mural of his face outside Centre Stage. Philip Bloomfield describes the Friday via the following words.

Having already sighted Todd Trainer, DiS unloads its portable liquor cabinet just in time to catch Bardo Pond’s opening salvo of valium laden pysch. Even during a deadzone Friday afternoon slot, a giggling Isobel Sollenberger still reminds us of that girl in every teen film who only listened to the Grateful Dead, and the band kick up a stormy blast of voluminous FX. And really, who could complain about a set that contains a version of ‘Tommy Gun Angel’ so powerful that it leaves us feeling distinctly dazed.

Growing also suffer at the hands of the scheduling: by all accounts, their bleeping, droning kraut-techno is the best (and the loudest) we’ve seen them in some time, and had it been later in the day, we’re nearly certain the whole place would have been throbbing. We’ll leave the final word to DiS’ (already) sleep deprived chaletmate, who fell asleep at the front and dreamt of being a tetris block. Which is an oddly fitting analogy for a tightly wound and equally wayward set.

It’s a toss up between Todd Trainer and J Mascis for most sighted performer this weekend: the pair of them are everywhere. As it is, the first glimpse of Mascis we get is onstage with his slacker outfit the Fog. Though forewarned by attendees of the MBV leg of December’s ATPs that he’s on formidable form, that still doesn’t quite prepare us for just under an hour of blissful soloing and pummelling rock from the very tight sounding threepiece. Although, truth be told if they’d just played ‘The Wagon’ and a wonderful, howling, extended version of ‘What Else Is New?’ we’d still have been won over.

Yeah Yeah Yeahs don’t endear themselves to many this weekend: turning up forty minutes late due to a broken van is something they couldn’t do anything about, but it wouldn’t have been much to ask to send someone out on to stage to let the increasingly frustrated masses know. As it is, DiS heads homeward to get to work on a bottle of Jim Beam, and returns to find the three piece tearing through Fever To Tell with reckless abandon. Though we’re somewhat fair-weather fans, and the sound on the cavernous Pavilion Stage definitely could be improved, as Karen O whips the crowd into a storm with her banshee shriek, it’s nothing short of great to see a band this huge headlining at ATP. The clarion call guitar and glam rock stomp of ‘Y Control’ is naturally a highlight, and no review would be complete without mention of a swooningly soulful ‘Maps’.

But for DiS, Friday night (and perhaps the weekend in general) is stolen by Six Organs of Admittance. From the start, it’s clear that a grumpy looking Ben Chasny and the power trio he’s assembled intends to take no prisoners, opening with a free rock assault led by drummer Alex Neilson, who’s clearly having the time of his life. Their bourbon soaked West Coast pysch is surprisingly aggressive live, an enthralling Chasny sweatily shredding notes from his guitar and rasping the occasional black metal vocal into the microphone. Randall Dunn lurks at the back on occasion, Sunn O))) cowled and surprisingly effete looking, but the star of the show is Neilson, who proves that free-jazz doesn’t have to be cerebral, battering the drumkit as though possessed by the same demons haunting Chasny’s guitar leads. A searing ‘1000 Birds’ is maybe the highlight, but it’s hard to pick out individual moments of brilliance in a set that never dips below being entirely engaging and absolutely perfect for a Friday night.

Thus, with our blood running hot, we head to Fuck Buttons upstairs on Centre Stage. The ATP-signed act were always going to be on the bill, but as we learnt back in May, that doesn’t mean they take anything for granted. Tonight is no different, and though we’ve seen them countless times over the last year, Messrs Hung and Power provide a brand of power noise electronics that’s completely euphoric and irresistible, every single time. If they weren’t so astounding each time, we’d be getting bored by now. Their set tonight is Tarot Sport heavy, but it’s a mournful and hopeful sounding ‘Bright Tomorrow’ that steals DiS’ heart as we whoop, bounce and holler along. But in terms of touching, a normally silent Ben Power’s final address to the crowd sums it all up: it’s incredible and inspiring to see how far they’ve come in a few short years. God bless ATP.

A 1am Tortoise set might seem like the stuff of dreams: the post-rocker’s jazzy compositions would definitely seem to suit being the later side of midnight. But DiS is flagging, and jawdropping though the double drummered Chicago band are tonight, we don’t feel we’re giving them our full attention. The set consists mostly of post 2001 Standards output, but it takes a storming conclusion of ‘Prepare Your Coffin’ from this year’s Beacons Of Ancestorship to really rouse us, just in time for us to head to a chalet party full of strobes, smoke and Warren G to cap off what has already been a fantastic ATP.

Favourite Five from: Paramore, of Mon...