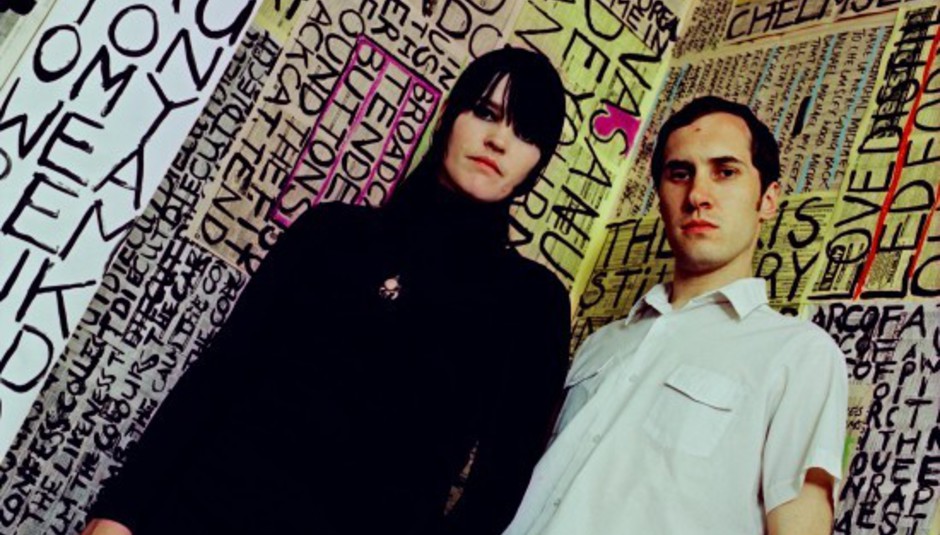 Long established Birmingham duo Broadcast have been favourites of many a DiSser for some time now, despite their output being much more sporadic over the past few years. Their last record, Tender Buttons, came out in 2005 and apart from the odd live performance here and there, little has been heard from them since. Until now that is, October's collaboration with graphic designer and Ghost Box record label supremo Julian House Broadcast And The Focus Group Investigate Witch Cults Of The Radio Age attaining a more than respectable 8/10 on these very pages.

Having spent most of the past month touring the States with Atlas Sound, Broadcast are about to embark on their first proper UK tour in four years, and with a new album due to be released in the early part of 2010, DiS thought this would be the perfect time to question both Trish Keenan and James Cargill about what they'd been up to in between times, and what the future holds for one of Warp Records most coveted and influential acts of its twenty-year history....

DiS: It's been a long time since we last heard from you. What have you been up to since Tender Buttons came out four years ago?
Trish Keenan: We did a fair bit of improvising in Birmingham with bands such as UFO Antler Band, The Libra Group and Monks Of Saturn. We've been active in a lot of ways but not publicly...

DiS: The last time I saw you (Trish) would be at ATP last year playing as part of recent tour partners Atlas Sound. Are there any more plans to work with Bradford Cox as part of Atlas Sound, and in a reverse role kind of way, would you be happy for Bradford to contribute to future Broadcast releases?
TK: Bradford and I performed together regularly during the tour...we sang 'Walkabout' and 'Tears In The Typing Pool' together. I can imagine creating a lot of music with him. He's a brilliant hyperactive spirit; funny, self-questioning, intuitive, argumentative..he made me cry and he made me cry with laughter!

DiS: Your new record, Broadcast And The Focus Group Investigate Witch Cults Of The Radio Age is your first musical collaboration with design artist Julian House. How did this come about and what did he add to the creative/writing process?
James Cargill: Well, we've always considered Julian to be a part of Broadcast really. He has been such a big part of the aesthetic plus we had been talking about doing a musical collaboration together for years and after he started the Ghost Box label and released his own music as The Focus Group it felt like there was a good context for it. I really love the way Julian works with samples and found sound... what he does defines the Hauntology thing for me...channeling fragments of orchestral library LP's and TV sound into a new musical form. I can't really connect it with any existing genres...which is something that very much appeals to me.

DiS: A lot of the pieces on the album are incidental parts, interludes even. How did you manage to make everything fit into the overall concept of the record?
JC: We were really into the idea of creating a kind of dream narrative. I think that once you have an idea like that it's quite instinctive to work towards...because of all the work we did writing to the idea meant the album happened very quickly. It took us a couple of weekends to put it together, so that also helped with the continuity.
TK: We liked the idea of a "Hammer Horror" dream collage in sound. The same as the way film sound tells a story sonically, we wanted the sequencing to work like this - music/sound narration, creating a story from songs, sounds and samples.

DiS: Did all of the ideas for this record purely come from these sessions or were there some works in progress left over from past Broadcast recording sessions?
TK: The idea for ...Witch Cults of the Radio Age began during the process of creating the artwork for our new album. James, Julian and I really like the 1970s 'Man Myth and Magic' encyclopedia magazine series and we wanted to work playfully with images of the paranormal and childlike psychedelia.
JC: A couple of the songs were written beforehand - Trish has been using dreams as a source for her songwriting for ages so they work in the context of ...Witch Cults.... A lot of the sounds are components from previous recordings that we used as a sound library.

DiS: What were the main differences between this concept and recording purely as Broadcast?
TK: It felt to me like I was in a group again. It's interesting to me what happens when minds join or leave a group. Julian's presence created another me as well as another band member. One more person splits you in two.

DiS: Do you envisage collaborating in such a way with Julian, or indeed anyone else in the forseeable future?
TK: Julian and the future is YES! his concepts and his love of what songs represent in a fictional sense is fascinating to me. The Focus Group is a shattered mirror in which music is fiction and designs are musical.

DiS: Broadcast is now effectively a two-piece. How will this carry on into the live shows, or will there be extra members brought in for this purpose?
TK: For this tour we will be a two-piece but we'll be extending the collaboration with Julian to live film.

DiS: What can fans expect from the set list?
TK: The set is in two halves. The first half we will play the improvised score to Julian's new film for Ghost Box, 'Winter Sun Wavelengths'. It is a continuation of the ...Witch Cults... idea and another side to the Broadcast/Focus Group collaboration. The film plays as though his rationale is trying to piece together fragments of a puzzle of man's history of beliefs. Sometimes working with Julian feels like he is a head in a jar and he sends me and James out on assignments. The second half of the set is a colourful sequence of pop songs from Ha Ha Sound, Tender Buttons, Witch Cults Of The Radio Age and the new tour EP, Mother Is The Milky Way, which is a companion piece to ...Witch Cults... in a way but the sequencing tells a children's sci-fi adventure story collaged from demos that never made it on to previous Broadcast LPs.

DiS: You are also currently finishing your next full-length album. What can you tell us about the record so far and when is it scheduled for release?
TK: I am a bit reticent to talk too much about something that is still in progress. The process for me is before language. I hear it in images in my mind in a way and sometimes there's nothing to say...it's just a series of jigsaw puzzle actions.

DiS: If you could pick a definitive moment or song in the history of Broadcast, what would it be and why?
TK: When John Peel played our first record on radio. I was nervous, like I was playing live for the first time.

DiS: Finally, your record label Warp is currently celebrating its 20th birthday. How influential has the label been in crafting your sound and did you do anything special to celebrate their anniversary?
TK: Signing to Warp has been hugely influential. To have a label believe in you and suddenly you're in the company of brilliant artists like Squarepusher, Aphex Twin, LFO and Autechre...it was really inspirational. It came also with a lot of pressure and hostility and so it's been an experience that we have not been allowed to fully enjoy. For a long time Warp fans griped about us being on the label. We supported Aphex Twin in the late nineties and the hostility from the fans was palpable. One bloke came up to the front and repeatedly stuck two fingers up in my face. We dealt with it but actually it hurt the band. At the time we would never have signed to any other label. Rob Mitchell and Steve Beckett were really ace, both had an interesting outlook on music, and brilliant with musicians. Back then Warp were our favourite UK label. We would never have made the music we made without them.

Broadcast are currently on tour of the UK and can be seen at the following venues:-