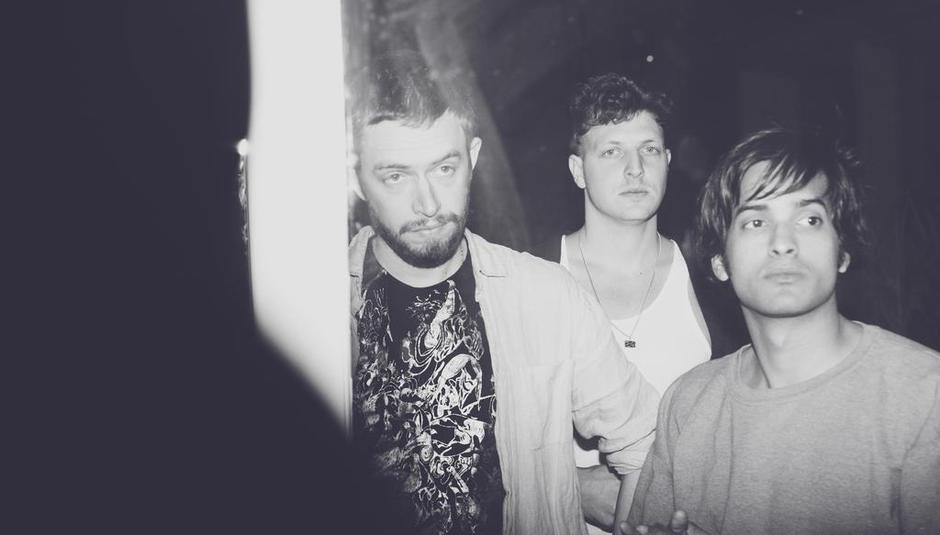 Back in 2007/8, Brooklynite trio (then quartet) Yeasayer were a tricksy proposition, their debut album All Hour Cymbals lurching wildly between utter genius and slight tedium, their curious blend of world music, pop and prog alternately staggering and dull. You may therefore not be entirely prepared for the frankly magnificent follow up Odd Blood, a fantastic Eighties and Nineties flecked electro-pop album that ditches the quasi Africana and the pomp in favour of hooks so shiny you could stab a man with them. A review to come in the new year, but for now enjoy this here write up of DiS’s recent chin wag with Anand Wilder, Chris Keating and Ira Wolf Tuton.

DiS: Hey all – so when did you come to write Odd Blood?

Ira Tuton: A lot of the music we had written on the road, and then in January or February of this year we all got together and started slamming our ideas together.

DiS: Did ‘Tightrope’, your song off the Dark Was The Night compilation predate it all, then? It sounds very different to anything on Odd Blood.

Anand Wilder: We made that right after the first album.

IT: During the first album.

AW: Yeah, during I guess. It was actually written around the same time as ‘Wait for the Summer’, for the same reason, actually, we wrote some music for a fashion show, instrumental stuff, and then we started writing songs based on that material.

IT: Yeah, and then it was the first song we played on our first ever UK tour...

AW: Yeah, they thought we were just going to play new songs.

Chris Keating: We showed them.

AW: Yeah, we played the hell out of those old songs.

DiS: So would it be fair to say Odd Blood represents something of a change in direction?

IT: Have you heard it?

AW: How come you haven’t leaked it?

DiS: To be honest, I actually don't quite know how...

IT: You don't know how to be a criminal?

CK: Could you not just put these songs in your iTunes library?

CK: Oh, well it's simple then. Just open up share and everybody can listen to them!

IT: Yeah, you don't have to be internet savvy, somebody else can do it for you.

Some pastries arrive. There is a light kerfuffle.

IT: So you think this album sounds different?

DiS: Yeah, I dunno if electro-pop is quite the correct way of describing it, but certainly it is by comparison to the first record.

IT: It sounds like the sun coming out after a cloudy weekend.

IT: Yeah, I think we always make an effort to explore new sounds. Also this time we were making a conscious decision to write songs that were inspired by other pop songs, love songs, you know? The first record is very much about the weather or the seasons... this record there's a lot more love and sentiment in there in the traditional pop sense, it was fun for us to try it. And sonically we're tired of sitars. Though we never used sitars.

CK: Whatever that was that sounded like a sitar.

DiS: Did you ever find it riling, being dubbed ‘world music’?

AW: I've never been unhappy with any comparison that anybody’s ever made, because the idea is to be as broad as possible. We’ve never taken on any aesthetic prejudice, preconceived notions of what is cool or uncool, and so it was all like 'what can we take from this?' 'what can we be inspired by?' But world music is kind of silly. We're all city guys, we live in New York.

CK: But in the end you want a strong reaction, and if that's what people take then so be it. You know, it's one of a few that kind of caught on in some way, and who knows what the next one will be.

AW: We're putting ourselves out in the open, it's not really in our nature to be critical of other people's opinions about us.

DiS: Are you happier people than before, would you say? This record feels a lot more upbeat and positive than the first, especially 'Ambling Alp', the lead track...

CK: I think I am a happier person now, I think we all are, because I get to make music, got rid of a job I didn't want to do and an ex girlfriend that I don't like.

AW: All my lyrics on this album are really dark and not happy at all. But I don't know if that gives you any perception of my own happiness, I feel... maybe it's just because I'm too scared to write really positive cheery lyrics.

DiS: I guess maybe I mean it was a much more musically upbeat, dancey record.

IT: I think when it comes to that, the first record was very ambient and ethereal and cloudy and heady and kind of felt like you were fogged up from your head inwardly. On this it's clear - the drums are clear, the guitars are clear; it's head bobbing just because of the way we recorded it, to punch through those speakers a little more. And that was a conscious decision.

CK: Yeah, I think it was a reaction to our first record. I think people saw it as, like, subliminally apocalyptic in a way that we didn't see in the subject matter, but the more so through the production.

IT: Yeah, well I guess that's always been my influence. I got into some industrial music, some Fad Gadget, some experimental early Eighties dance. But I think hip hop production from the early Nineties was an influence, more so than the pop Eighties stuff... I think I was afraid to have done that on the first record, be influenced by that stuff, but now, reflecting back... maybe it’s just because I’m getting older, reflecting on my early teenage years. I really love the way that first Nas albums sounded, I really like the production on that Black Moon record; I mean obviously some of the Eighties stuff is always going to be there - I mean Cyndi Lauper, whatever - Kate Bush.

DiS: Do you think that indie band plus hip hop production is at all a New York type thing? I guess I’m thinking of the Dirty Projectors as peers here...

IT: Everybody moves [to New York] because there are so many people making so many different kinds of sounds, so you're surrounded by a very accepting environment, so long as you're productive, you’re constantly seeing all these different avenues being explored and advanced and accepted... we were coming from a different place on the first record, it was kind of like being in a bubble, it wasn’t like ‘man, we’re in New York where this will be accepted’; if anything it was ‘I’m glad we’re doing this together – nobody’s going to accept this but I’m glad we’re doing this together’.

CK: But I haven’t heard any pop bands really embracing the Tribe Called Quest production aesthetic. But I think as it turns to the new decade of the 2000s, then we look back and think ‘oh, Nineties music, that was pretty cool’. I think you need that differentiation, before you can start to think, ‘oh, there’s some really good one hit wonders from that era, some really good pop stuff’.

IT: Yeah, lots of jock jams... Ace of Bass style or Snap or Haddaway.

IT: But you know, I would never have even thought of liking that stuff when I was in high school, but now I revisit it and think ‘there was some pretty cool production on some of those songs’, you know, those three minute dance pop songs.

DiS: How did you come to sign with Mute?

IT: They’ve been pretty supportive ever since we first came over here. They wanted to put out the first record, and it just didn’t seem right, we wanted to have a go at it ourselves first,. But yeah, some of the people at Mute had been to our show at like, the Windmill in Brixton, or something like that, when there were only 20 or 30 people and we stayed in touch... even when we talked to other labels, it’s like some A&R you don’t know trying to be your friend, and we’re like ‘but we’re already friends with those guys!’

DiS: Presumably its roster and history was some attraction?

IT: Definitely, like they own the Kraftwerk catalogue, Can, and then obviously Depeche Mode and Cabaret Voltaire, Nitzer Ebb, it just demonstrates a certain willingness to experiment and be weird and not give a fuck.

IT: I’m interested in the ides of the influence of technology on the progression and evolution of human society and the way that technology integrates more and more through life, and also the way that globalisation breaks down borders, everyone intermingling into one giant population... So I liked the phrasing, like a big term for somebody who didn’t fit into some THX 1138 fascist computer chip in your brain regime.

DiS: Do you spend a lot of time thinking about the future?

IT: Yeah I guess so... doesn’t everybody?

DiS: Not every band writes songs about it.

IT: Yeah, but to me it always seems like the most interesting thing – what is technology going to be in ten years? What will we be doing in 40 years? How are we going to fuck up the world? How are we not going to fuck up the world? I’m interested in futurist writing, that stuff to me is always the most exciting and I think as a band that’s very exciting for us, it’s not like ‘how do I get that vintage 1968 guitar sound?’ it’s more like ‘how do you get a sound that sounds like it’s from 2068?’. What is that going to be? What is music going to be like to 20 years time? That’s what I feel like I’m trying to think about, like the thinnest, weirdest, stupidest production.

DiS: In Hollywood the music of the future is always some shitty industrial band.

IT: It is, it’s always like Rob Zombie or the Fifth Element with the blue alien singing opera with an electronic beat... I don’t think that’s what it’s going to be like. But we’re consciously trying to make music with that in mind, that band in that film in that future club scene... and it always sounds like the Eighties!

DiS: Finally, would you care to offer some records of 2009?

IT: I liked Bat for Lashes.

CK: I thought the new Jay-Z album got totally shit on.

DiS: Okay, thanks, and see y'all next year.