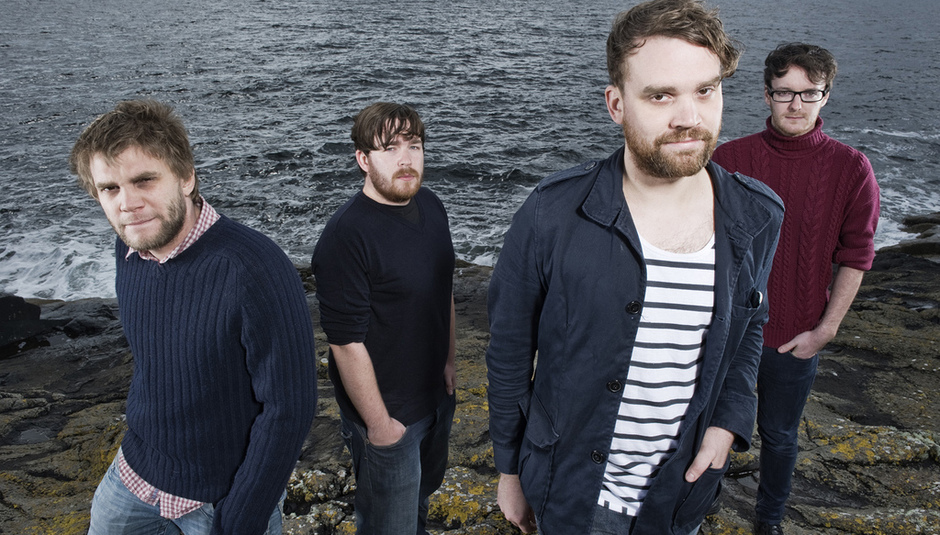 The first time DiS saw a three piece Frightened Rabbit play in Nottingham two years ago, you could count the number of punters on the fingers of both hands. Since then, it's been a one-way journey upwards, aided in no small part by the critical acclaim and slow-building commercial success of 2008's sophomore album The Midnight Organ Fight (No.2 in DiS' albums of 2008).

DiS caught up with the Selkirk quintet before their capacity crowd in Nottingham's Bodega Social - a far cry from their aforementioned under-attended last appearance supporting US indie also-rans The Good Life in 2007.

Last week, saw the release of the first single, 'Swim Until You Can't See Land' from the forthcoming album The Winter Of Mixed Drinks, due for release in March of next year - it's one of our 10 albums we're most looking forward to in 2010. Pictured at DiS in 9 Party at The Deaf Institute, Manchester

DiS: It's been 18 months since the release of Midnight Organ Fight. What have you been up to in the meantime?

Scott Hutchison: When that came out we did a lot of touring, and didn't finish that until about February of this year. Following that I just went straight back into writing and I got a new album together. We finished that in the summer. We didn't want to be one of those bands where there's a huge gap in between records.

DiS: Were you surprised at the almost blanket praise it got critically from pretty much every publication you'd care to mention?

SH: Its a nice surprise! I was proud of the album all along, but you never really know what other people may think so to get a positive response all across the globe was pretty satisfying.

Billy Kennedy: I have seen a couple of stinking reviews too...

SH: Well I guess you'll never please everybody all the time, but generally it's nice to receive credit for something you've worked extremely hard on creating.

DiS: Looking back at Midnight Organ Fight, are there any songs which stand out that you're particularly proud of?

SH: I'm really pleased with 'Modern Leper'. It still really works live, which I think is the real test for me. When you've been playing the songs night after night for over a year it's only natural that some of them will become a bit boring, but that one still excites me to this day. It has a solid, hairs-standing-on-the-back-of-the-neck quality for me.

BK: I really like 'Floating In The Forth'. It always was my favourite on the record when we were making the album and still is now.

SH: I think that one is quite special too in the fact that we never play it live, so its never lost its freshness amongst the band.

DiS: You mention being bored of some of the songs from that period. In hindsight, is there anything about Midnight Organ Fight that you'd change or leave off?

SH: No I don't think so. That would drive me insane to be honest. Once something's done, like with the new one, it's done. I think you almost have to view it as a cut-off point, a slice or memento of a particular period in time rather than if I did it now, would it be different. Of course it would, we've grown as a band since and the line-up has changed too, but I wouldn't want Midnight Organ Fight to be different because at that point in time, that's who we were. It's not who we are anymore, but it's grown into something else anyway, so I guess that makes it less relevant what I or the rest of the band think of our records. Its more about what other people think of them.

DiS: You've recently added a new member to the band, ex-Make Model guitarist Gordon Skene. How long has he been working with you?

SH: Literally no more than two weeks! He's still getting to grips with some of the stuff and one of the purposes of this little tour was to get him used to the songs. We didn't want the album to come out next year and Gordon to be really fresh then, so in a way it's good to get everyone bonded beforehand.

BK: I think from his point of view it will make him feel like he's part of the band more than he would of if he wasn't playing live with us for another five or six months.

SH: I've never been in that position but it must be difficult for him coming into something that four other people were involved in studio-wise. He's not seen any of that process yet he's coming in playing these songs that perhaps he likes, but doesn't have that same level of connection with so I think one of the aims of these shows is to try and help build that for him.

DiS: How did Gordon's involvement with the band come about?

SH: We played with Make Model a couple of times and then just socially hung out ever since. Gordon's in about three bands at any one time anyway, and he loves touring and playing live, so it kinda made sense all round. He actually came along with us last year when we played the Biffy Clyro tour and got on with everyone, which to me is the most important aspect. I mean, it's alright having a talented musician in the band but it has to be someone who everyone gets along with, and Gordon fits that criteria on both counts.

DiS: Do you see Gordon being involved in the songwriting in future?

SH: I'm slowly trying to open things up. I've not yet opened up the songwriting; I still take charge of that but I think it could be healthy. I've never once said to anyone in the band that they can't get involved. If someone wants to give it a shot I wouldn't say no. No one has ever come to me yet but I'll take submissions. Why not?

DiS: Your new album, The Winter Of Mixed Drinks, is due out in March of next year. Where did the record's title come from?

SH: It's from a line in one of the songs, 'Living In Colour' - same as Midnight Organ Fight actually, which came from a line in 'Fast Blood'. I guess we like doing that. I looked through all the lyrics and couldn't find one decent enough to use, and then that one was hiding away near the end of the record. I think the "Midnight Organ Fight" was a phrase all of our own, and with this album I wanted to create another one that we could claim as our own as well. I'd never heard that sentence before and I just wanted to call our album something we could immediately identify with.

DiS: Peter Katis, who worked with Interpol and The National earlier in the decade, also went on to produce Midnight Organ Fight. Was he involved on the new record?

SH: He mixed it for us. I'm still a bit unsure as to where mixing ends and production begins, but there's no doubt about it The Winter Of Mixed Drinks is shaping up to be a huge sounding record.

DiS: What can you tell us about the songs on the new record?

SH: I think the current single's quite a good way in. 'Swim Until You Can't See Land' pretty much represents the theme of the record.

DiS: You're on tour now until the middle of December. What does your current live set consist of?

SH: Well, we're playing three of the new songs at present - 'Swim...', 'Living In Colour' and 'Nothing Like You'. I wouldn't want to go and see a band and hear too many songs I don't know, but at the same time we have to get the songs ready for when we tour the record next year. There's only so much you can do in rehearsals. The real test comes when you play them to an audience and see what kind of response it generates.

Grant Hutchison: Whereas with the Sing The Greys material we've pretty much weeded it all out.

SH: Yeah, we'll be playing 'Square 9' for the rest of this tour but then after that there's a good chance that will go as well.

GH: This is pretty much that album's swansong and then I think we'll kill off Sing The Greys from our live set entirely.

BK: Until the arena tour!

DiS: You've released your Christmas single 'It's Christmas So We'll Stop' the past two years. Are there any plans for one this year?

SH: No, it's not happening.

GH: It was spoken of but we thought inflicting that song on people two years running was more than enough!

SH: We are playing a Christmas show in Glasgow and we've talked about having a string quartet and a choir so maybe that will happen.

DiS: If you were asked to record a Christmas classic as a cover what would you choose?

SH: I think I'd have to say 'Mistletoe And Wine'.

Andy Monaghan: For me it would be the theme tune from The Snowman.

SH: There was this girl on 'Pop Idol' years ago and she did a Christmas song in this really sexy outfit...what was her name? Rosie..?

SH: ROSIE RIBBONS! That's the one! She did 'I Saw Mummy Kissing Santa Claus' or something like that. I wonder where Rosie Ribbons is now?

DiS: Apart from releasing the new album, what else are you looking forward to in 2010?

SH: I'm looking forward to going back to South By Southwest. I'm really excited because we're not doing it the same way as we did last time we were there. We're just doing one show and one party rather than seven shows spread across the whole event.

GH: We're also looking forward to having a proper festival run next summer, which is something we've never really done as a band yet.

SH: This summer just gone, the timing didn't quite work. We were coming towards the end of recording the album and that took priority over everything else. I would love to play somewhere like Glastonbury, or even just go there as a fan. I've never been so it would be a whole new experience for me.

DiS: Finally, are there any other bands who you're particularly excited about for 2010?

SH: For me I'd have to go for The Antlers. I don't know if you've heard their album Hospice but its an amazing record, and I think they could really go onto bigger things next year.

GH: Live they're really striking. The singer Peter Silberman has an incredible voice.

Frightened Rabbit are currently touring and can be seen at the following venues:-

DiS meets We Were Promised Jetpacks