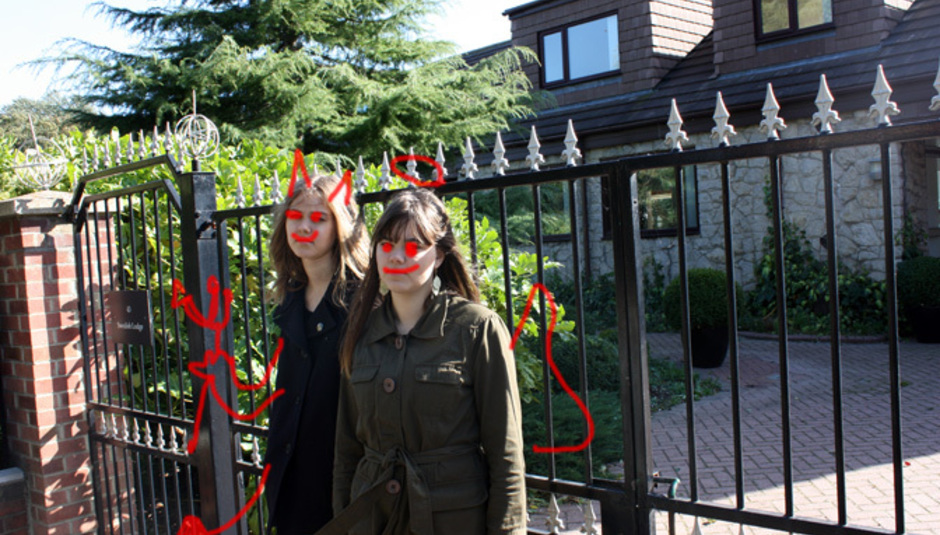 Swedish indie-pop-folk duo First Aid Kit are on tour with the partially Swedish Fanfarlo and, as we were running the latter's tour diary, we thought it'd be a good idea to do the former's too. They make their first appearance in Part II, with both bands taking in the underrated town of Middlesbrough. Read Part I here.

Dear all at Drowned in Sound,

After a lovely show we had a lovely day off in Glasgow - it was our first time and we thought the city was just amazingly beautiful. After getting lots of tips on things to do from two really nice girls at the show the day before we went to a great Indian resturant by Hill Head.

After that we walked to the Kevingrove musuem which was very close by, since we had a lot of people recommending us to go there the night before. It was a great museum, our favourite thing there was this old machine which reminded us of a cupboard but it was really a ”music machine”. It played songs from Wizard of Oz and we stood there singing along, even though we haven't seen that movie in ages we still remembered the lyrics to the songs, and it stil remains one of our absolute favourite movies. We remember singing 'Somewhere Over The Rainbow' as kids in our garden. Sweet memories.

We then walked the streets of Glasgow and ate some really disgusting China bufée. We felt real sick the rest of the evening. Too much of the good is not always good...Then we went to our hotel and watched Pointless and The Weakest Link on TV. Why don't we have those shows in Sweden?

Visiting Middlesbrough was rather special for us since our dear mother spent five years of her childhood there. Telling this to the audience, no one really seemed to believe us. The show was Westgarth Social Club was really good and we met a lot of really great people there. The next day we went for a stroll in around the town and we came upon a really lovely little vintage shop where we found this amazing dress. Later we drove to Church Lane to look at the house where our mother lived. It was a really beautiful house and we took some photos to show her when we got home! We continued our travels to Nottingham, playing at a place called Bodega. We had a lovely time, the audience was so nice and supportive. A special shout out goes to the girl from Australia who kept singing along to the songs. That warmed our hearts. We didn't have a lot of time to see Nottingham though which was a real shame...

The last few days have gone by in flash; there's something about being on tour that seems to compress time to a blurry stream of smelly empty venues, hanging around biting your nails waiting for the show, then having the most amazing time ever for an hour and before you know it having breakfast in the van on the way to the next town.

On Friday we went to Middlesbrough to play for this lovely promoter called Andy who's been e-mailing us for about two years, trying to get us to come and play. After soundcheck he comes running with a jar of peanut butter saying it was on the rider and apologising he had forgotten to get it. Lucky for him - needless to say, no peanut butter would have been an absolute deal breaker.

Nottingham and Oxford were both two really good nights, those places are more fun to play every time we come back. The Jericho Tavern in Oxford claims to be the venue where Radiohead and Supergrass where discovered, so the venue tastefully has the bands' faces painted on the walls.

Yesterday was stupidly busy with an acoustic session live on air for Cerys Matthews, a photo shoot for Spin magazine and then of course playing the biggest show of the tour at Bush Hall in London. Before the session we realised that 'The Walls Are Coming Down' is on their A-list so really, we should play it... except we've never played it acoustically before. So we rock up at the BBC Western House with our instruments and spend up to the last second before we're on air rehearsing the song, trying to work out a keyboard part that will also cover what the violin and glock are supposed to be doing. As we're on and Amos is clicking us in I'm bracing myself for catastrophic failure but in the end our remarkable professionalism saves the day yet again.

The Bush Hall show was sold out weeks ago and we knew a couple of big wigs were coming down, so the pressure was on. Of course we managed to play the most shambolic show of the tour, with me not only managing to unplug Bobby's pedal board during Finish Line, but also dancing around and activating some sort of extreme metal circuit deep within the belly of the pedal beast, turning my relatively restrained jangles into a terrifying blast of distortion and feedback. Despite me panicking, I think the crowd might have thought it was actually great, so maybe it's the way forward. From now on it's all screaming guitars in Fanfarlo.