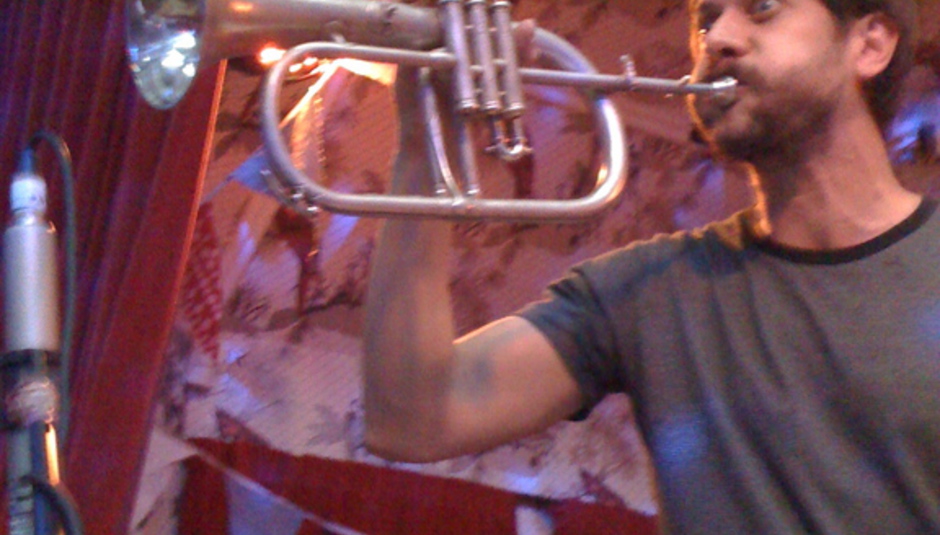 Multi-national indie-poppers Fanfarlo are on tour. And, guess what? Yes, they're doing a tour diary for us, complete with pictures! Here they chronicle Part I of this particular adventure. Short and sweet it is, but stay tuned for more Fanfarlo action.

So the first stop on our U.K tour with the awesome Swedish band First Aid Kit was Manchester. A little over a week ago we were playing a show on Sunset Boulevard but the grey sky and drizzle really sucker-punched home the fact that we were back in old Blighty. Yes, we were back and we were ready to be treated like bastards by venue staff and spend half our time whinging about the price of stuff in motor way service stations. The first show soon raised our spirits and by the second gig in York we were 'literally' glowing with happiness at being home. Klara and Johanna of First Aid Kit and ourselves decided to team up on stage for a cover of the pretty sweet Devandra Banhart song 'This Is The Way'. Glasgow welcomed us for the third day of this mini-tour and we rocked King Tut's. The next day we arranged with the Glasgow based music magazine The Skinny to throw a guerilla gig in The Cloisters of Glasgow University to anyone who heard about it on the internetz and any lucky people passing. A whole load of people turned up and we had a great time. As expected, security started buzzing about and jabbering into walkie-talkies just as we were finishing and started barking on about who gave us permission to rock out on their property. We mentioned that someone in an office probably spoke to someone at some point about something and we quickly scarpered before they slapped a fine on us or something! Going somewhere else tomorrow but sadly I can't remember where. Tune in to find out where it was and what went on.