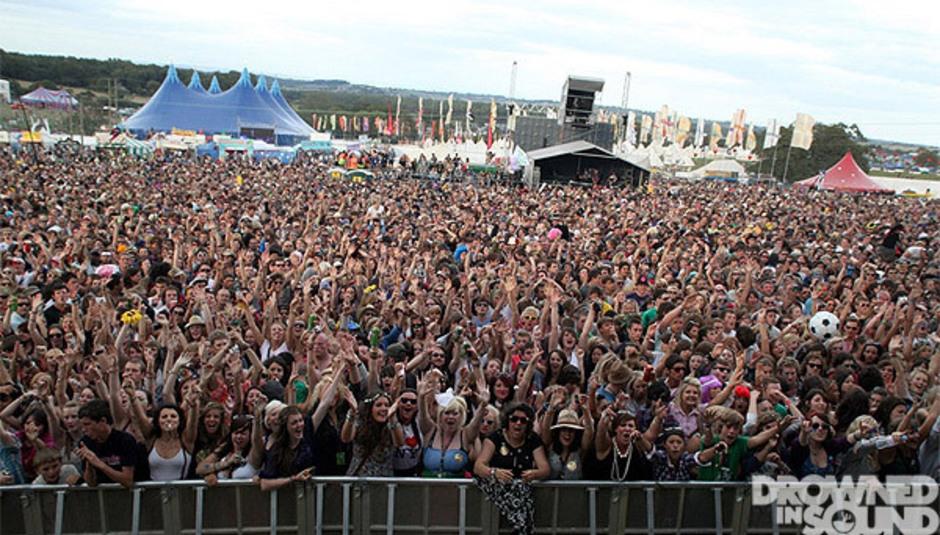 Arriving at the fag-end of a summer teeming with gruelling festival weekends, Bestival has enough gusto and idiosyncrasy to more than stand up for itself. The 2009 line-up was in the enviable position of substantially growing without being added to, with acts like La Roux, Little Boots, Florence and the Machine and Speech Debelle going stratospheric in recent months, and others like Passion Pit, Friendly Fires and Toddla T enjoying burgeoning success. With an intimidating amount of music for one man to watch (and potentially miss), this reviewer took a philosophical approach to the task, following his whims and personal needs wherever possible.

Producing super-efficient good-time pop music, there surely couldn’t have been a better sunny afternoon spot for Passion Pit, whose joie de vivre is infectious. The still-fresh Friday crowd are more than happy to be on the Isle of Wight and Michael Angelakos’ sharp falsetto cannot quite distract them from their own fun, the well-known ‘Sleepyhead’ and ‘Better Things’ creating the only real diversions.

Sharing some traits with Passion Pit – indie-dance leanings and a musical devotion to Prince – Friendly Fires show up their American peers with a thoroughly arresting performance. One of a few guitar-based bands to use electronic instruments both prominently and effectively, they could have been condemned to the indie-disco. Instead, the Hertfordshire band hit transcendent notes not heard since Cut Copy’s In Ghost Colours. Tight and expansive, the emphatic ‘Kiss of Life’ hints at better still to come.

Virtually non-stop touring over the past few years has only reinforced Soulwax’s position as one of the best party inducing acts on the circuit, and this is pure hedonistic revelry. Mass-movement ensues, first on the main stage, and later with 2 Many DJs in the Big Top. Relying heavily on 2005s Nite Versions and various other remixes, Soulwax’s style is just as relevant, even if overexposed at times. Justice’s cataclysmic 'Phantom Part II' provides the highlights to both rip-roaring sets.

Retiring in interviews, wooden live – MGMT sometimes feel like they were formed as a fancy dress joke got out of hand. Abjectly failing to capitalise on the festival goodwill or popularity of Oracular Spectacular, even ubiquitous singles ‘Kids’ or ‘Time to Pretend’ register stunted reaction, despite being stuck in most people’s heads for the last twelve months.

After four years and two scrapped attempts, Massive Attack’s LP5 is still a “long way off" according to 3D. On this evidence we aren’t missing much, this drab performance confirming the duo incapable of producing anything their fans, let alone they themselves, are proud of. The opener, by all accounts new, sends their set, and the evening into a downward spiral. Perennially described as purveyors of moody, dark music, this is proven for all the wrong reasons. Poor volume and disengaged performances make for overwhelming disappointment and ‘Unfinished Sympathy’ cannot revive a cold and detached set, with ‘Teardop’ lacking its original colour.

The Jim Beam Bar provides the unlikely platform for the Dirty Projectors, whose keen audience spill out of the small tent. The polyrhythms, multiple-harmonies, and all-round technical excellence of Bitte Orca is reproduced vividly, the band creating an impressive sense of disorder out of an essentially clean and taut sound.

With Mika going out in a blaze of excessive shrieking and glitter, Lily Allen is next up to bathe in the afternoon glory and stake her claim to the Bestival throne. Buoyed on by the good spirits and glamming it up, Lily easily wins over the masses. For all the shortcomings of her latest material she certainly embodies a few of the festival’s notable features of flamboyance, frivolity and exuberance – and it is no surprise she is such a success when she is so identifiable to the girls and desirable to the boys.

Despite being hailed as an unlikely subversive pop band, Klaxons already feel tired and dated, their zeitgeist-coinciding style falling out of favour alongside Ed Banger et al. The obligatory finale of 'Not Over Yet' goes down expectedly well with the Bestival faithful, but their cosiness betrays complacency.

Diplo’s own Mad Decent Soundsystem presents an evening of Portuguese kudoro, dancehall riddims, and Miami bass, alongside any other earth-shattering style he can get his hands on. A dancehall project conceived by Switch and Diplo, Major Lazer is a breakneck bombardment of low-end dub, reggaeton, bashment, ragga and anything else that fits is present here, complete with authentic Jamaican MCs. At Bestival for a third successive year, Buraka fit Diplo’s own percussion-driven pan-global outlook. Thunderous enough to scramble guts, the Soundsystem is colossal, the only complaint being that its power in the Big Top can fug-up what is already a murky sound. Diplo’s own set, full of his trademark cuts and obscurities, is overshadowed by the stage-setting going on for La Roux, whose imminent arrival is filling the Big Top up to crushing point – as good a point as any to make a hasty departure.

Just as Bo Selecta! turned Craig David into a joke-figure, Bill Bailey’s affectionate send-up has ever since tainted this reviewer’s perception of Kraftwerk. This rather daft association was kept mostly below the surface while standing wide-eyed, slightly bewildered and very nearly hypnotized. Their dystopian vision can be lost in translation, but execution remains lethally effective. ‘Radioaktivitat’ (a chilling indictment of all things radioactive) might lack subtlety, but is combined with a staggering visual show of lasers and atom bombs, with the four statuesque members in neon-ribbed suits, like androids. A computer voice intones the words: “HI-RO-SHI-MA” with such ground-quaking gravity, it’s impossible not to walk away feeling slightly disturbed.

Having toiled tirelessly for well over decade, a bit of good fortune has finally come Doves’ way, with some belated recognition. Jimi Goodwin sups up this most pleasant moment, lamenting that they cannot play all night long, but tipping us to watch his mates “the elbows”. 'Kingdom of Rust' glides wondrously, while 'There Goes the Fear' is a pertinent tale after a weekend of excess. The short set omits some favourites, but Doves are spoilt for choice with such a strong back-catalogue.

The blanket approval that met the Fleet Foxes’ emergence was enough to send some running – with others following when the band’s opening salvo sounded more like a choir meeting than a rock’n’roll performance. Those who hung around – and many did – were treated to a performance of overwhelming magnificence. Enough has been said about the Seattle band, but one thing can’t be overstated enough: the expertise and efficacy of their harmonising stands them comfortably among The Beach Boys.

Something of a victory set here for Elbow who, like Doves, have steadily built up a fine back-catalogue, full of warm soul, heartache, and urban witticisms. Largely made up of The Seldom Seen Kid, the performance has reserves of ideas and a slow-release satisfaction – much like their career trajectory. For a Sunday night slot, this is a much-needed antidote to the thrilling but frenzied electronic-base that that Bestival specialises in. Convivial to the end, Guy Garvey’s voice radiates tenderness, his onstage presence all genuineness and caring, constantly asking the audience if we are ok, and looking after one another. Lines like 'Weather to Fly'’s: “we'd sing in the doorways/or bicker and row/Just figuring how we were wired inside” reverberate with compassion; the heroic One Day Like This echoing around the field long after Elbow have left the stage.

Rushing over to the Big Top, Squarepusher is directing proceedings in his own inimitable way. A frenetic thrash of a show, the virtuoso hits ridiculously fast riffs on his trademark 6-string bass. Laced with typically beguiling time signatures, the introduction of some seriously high bpm ups things further. The Jazz-inspired bass, slapped all over the busy backdrop remains most remarkable part of his head-jacking act.