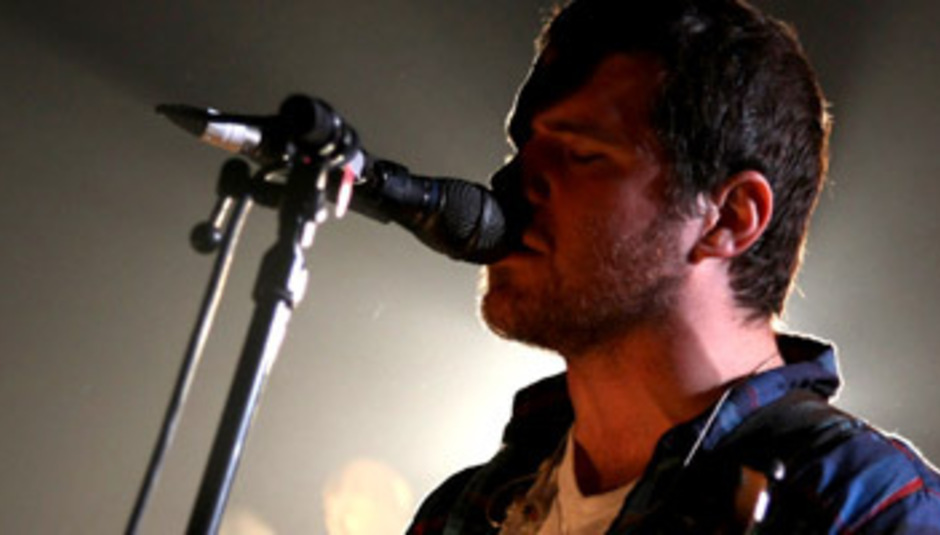 The hold music playing before the label rep connects us to Brand New front man Jesse Lacey draws a charming parallel to the eerie old hymn that opens the duo's new record, Daisy (out September 21st).

After a minute and a half of a lady singing 'On Life's Highway' to a piano accompaniment, 'Vices' starts with an earth-rattling scream. The first time, you might have a little accident.

Thankfully Jesse doesn't answer the phone in the same way.

The record – their fourth – leaked a few weeks ago, and the verdict from their fan base has been nowhere near unanimous. But for every fan Brand New have ruthlessly alienated, there's a bigger majority drawing up blueprints for shrines.

Talking to Jesse feels a lot more like talking to God than any human should, and not just by virtue of his awesomeness. He's a very calming force: thoughtful and laid back, and – despite his moody and elusive reputation – quite the talker.

DiS: Hi Jesse. How are you?

DiS: What are you up to today?

JL: We have practice, actually, for the first time in a while. We leave for tour in a few weeks, so we're just starting to go over sets and songs, and hash out all the parts we need to be playing and whatnot.

DiS: How did you feel about Daisy leaking online?

JL: We don't really care much about that stuff. We don't really concern ourselves with how those things affect our record sales, negatively or in any other way. I'm just glad that people are interested enough to go download it.

DiS: What do you think of the reaction to the record so far?

JL: People seem to be reacting to it kind of in polar states. I think a lot of people like it and like it a lot. Then there's another group of people who aren't in to it, but more passionately. They kind of hate it. I think we're pleased with a reaction like that. I think if we put out a record that was mediocre and kind of lukewarm, and if it was passive enough where everyone could listen to it and everyone could enjoy it, I don't think we'd be very fulfilled with that.

DiS: Do you think the record is a progression?

JL: I guess you could say there is a progression to this record from the last one, but I think also it's more a digression. We were, I think, returning to a lot of things and ways of playing that we enjoyed when we were younger. I think we're a little bit looser and we wanted to be noisier. We wanted a record that we could play live and have a good time, and I think we've accomplished that.

DiS: You've said in the past that you'd advise new bands against signing to major labels, despite being on one yourselves...

JL: I just feel at this moment in time for the majority of bands like ours, there's not much that a record label can offer them. I mean, really the major role of a record label was to press records, but that role has been diminished because record stores are closing around the globe. Everything's going to be digital, so there's no manufacturing.

The only real purpose a label serves right now is to advance money to a band, so they can have a recording budget. But even recording isn't as expensive an ordeal as it used to be. You can easily record records in your basement now and have it sound just as good as something recorded in a major studio. And in the end I think maintaining the control and decisions in your band is the most important thing.

DiS: You've set up your own label – Procrastinate! Music Traitors – and re-released a Kevin Devine record on it. Have you got plans to put any more records out?

JL: It depends. It takes money! So it depends if we discover anything good or if our friends want to put anything out through us. We're always open to it, but there's no real plan for it right now.

DiS: Your song, 'Sowing Season (Yeah)' is on the new Guitar Hero game. How do you feel about that?

JL: It's cool! I'm a big gamer. I like video games a lot... but Guitar Hero is kind of the one that really weirds me out. When people become very proficient at it, I wonder why they don't pick up a regular guitar. It's very fulfilling when you learn a song that you love on guitar and you play it, it's a great feeling. And that feeling is only slightly there when you learn a song on Guitar Hero. But we're always grateful for opportunities like that and it's cool to be part of pop culture in that way.

DiS: Well, I'm pleased because I can't do holding down strings! I've got weak fingers.

JL: Well, there you go! We'll make an exception for you. Guitar Hero's good for some people.

JL: To be honest I don't listen to much music any more. There are records I listen to that I think don't influence the band at all. Recently, Band of Horses, Bloc Party, I loved the last Radiohead record and I really haven't listened to any Radiohead records since OK Computer and maybe a little bit of Kid A – they haven't really been on my radar since then. Sigur Ros, Explosions In The Sky...

DiS: How does it feel being a major influence for so many new bands?

JL: I don't know! I wonder if we're still touring in five years and if we take a younger band out on the road, will they be a band that has kind of pressed themselves from our mould. I think that would be really funny. And weird.

DiS: Your Reading and Leeds festival sets caused a bit of a debate online. It wasn't a very obvious festival set... Like, you didn't play 'Sic Transit Gloria'...

JL: 'Sic Transit Gloria', I actually just forgot about! Sometimes you look at the set list and you go, I know I'm forgetting an obvious song here, but I can't figure out what it is... And then you just kind of go on stage. You literally just brought to my attention that that was the song I was thinking about.

DiS: You didn't allow the BBC to broadcast your set either.

JL: We didn't? Yeah, that's kind of... like... a decision... I'm not even sure if I had a part in that one. But sometimes we just don't feel like we're comfortable with a certain show being aired. We're definitely up tight and weird about those things, but you know, we can't help it.

DiS: What are the plans for Brand New beyond the Wembley Arena show in January?

JL: We're going to keep touring through next year. We'll probably come over to the UK for a little while, or go to Australia and Japan for a while. We'll see. We're not going to tour as relentlessly as we used to, I don't think. We're older now. We're old guys, and so we like being at home. We like writing music and recording it, and going out on tour is becoming increasingly harder and harder to do. So we'll see what happens.

DiS: There's internet rumours that Daisy is going to be the last Brand New record?

JL: I don't think that will be true. It might be our last full-length record for a little while, but we've got a lot of things lined up that we want to record, so I think that will happen pretty soon.

I'm never really going to say it's the last Brand New anything ever. I think we're just moving along with this and when we want to do something, we do it and when we don't, we don't. So if five years went by and we haven't done anything, I don't think that would mean we're not going to record a record again.

DiS: You don't do a lot of interviews. How do you decide who you're happy to talk to and when you just don't want to talk?

JL: I don't know what it is with me not doing interviews. I like talking to people, I like meeting people, I like discussing things... I don't so much like discussing our band, or myself. Those things don't really find their way into my everyday conversations. It's just something I do, and all the things that are attached to it I don't think I really agree with at all. So when people want to ask me about it, I'm like, I guess I can talk about that for a while. But the more I do, I don't want to do it.

It just doesn't interest me. I like playing music. I like being in a band. I like writing music. But I don't like talking about it. So there'll probably be a point coming up in the next couple of weeks when I'll just cancel all the rest of the interviews that I have scheduled for the year and keep my mouth shut for another couple of years.