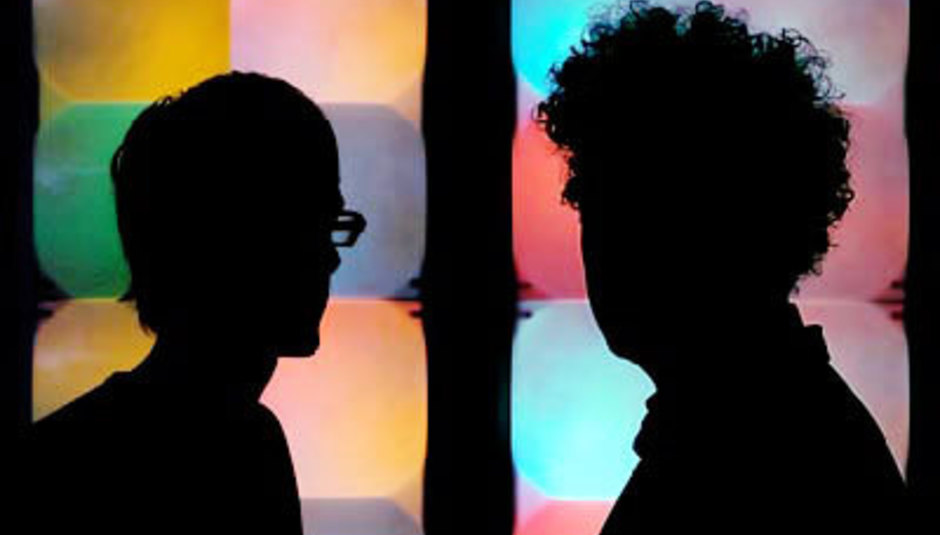 DiS popped along to the Simian Mobile Disco Temporary Pleasures album launch for a rather unusual experience...

The PR blurb for this rather unusual album launch was enough to make DiS feel like a technological philistine – either that or a Daily Mail reader writing a strongly-worded letter to the Plain English Campaign. “Interactive augmented reality experience” was a description that aside from being almost entirely indecipherable, set off warning bells (or bleeps, if you will). If the promoters were cloaking the installation in such jargon who were they trying to convince?

Augmented Reality (AR), is apparently “a new medium, which mixes real-world and computer-generated images (virtual reality), making it look like virtual objects exist in the real world”. Think of the hologram-type computers Tom Cruise uses in Minority Report and you’re getting close.

Within a six-by-six foot area are twelve ‘tabs’, discs that represent each track of the SMD song, such as bass, kick or snare. Above the area a camera projects the action onto a large screen. When face down the tabs are unproductive, but when picked up by the camera their code of various shapes causes the track to be phased in, while being represented by virtual reality shapes on the projection. So, anyone can feel like they are creating music, or even collaborating with SMD.

There is nothing particularly new here, despite claims to be the “first ever human synthesiser”. The technology, Jas Shaw explains, merely enables users to build up a tune, track by track, like they would on Reason, but in a physical, and naturally more accessible way.

Philosophical about the launch, Shaw dismisses the acronyms and tech-speak, emphasising a simpler view: “If it’s a choice between doing something a bit more engaging, or the typical playback in a swanky bar, then we’d rather do this.”

Inevitably, the results can veer towards the chaotic. With one and all welcomed to join in, and twelve tabs available, the interactive nature of the technology is its best and worst asset, summed up tritely by the phrase Too many cooks spoil the broth. After two hours of one mind-bending loop I wasn’t sure I would ever want to listen to that particular track again.

But taken at face value – and after all, this is the launch for the Temporary Pleasures album – the set-up is great fun. Residing in a shop-space off Carnaby Street’s Kingly Court, the installation, designed by Kate Moross in connection with Inition and Magic Symbol, is open to the public for the week, and is certainly worth a visit.

In terms of success or longevity the clue is probably in the title. A fine bit of publicity for the album, but the idea of SMD, or indeed any producers, adopting these methods full-time seems faintly ridiculous, and could rank alongside the hand-held keyboard in ill-conceived fad stakes.

Still, the launch was much more enjoyable than most thanks to its inclusiveness and SMD have done well being such early adopters of this technology, even if their own mandate of temporariness might restrict this to a one-off.