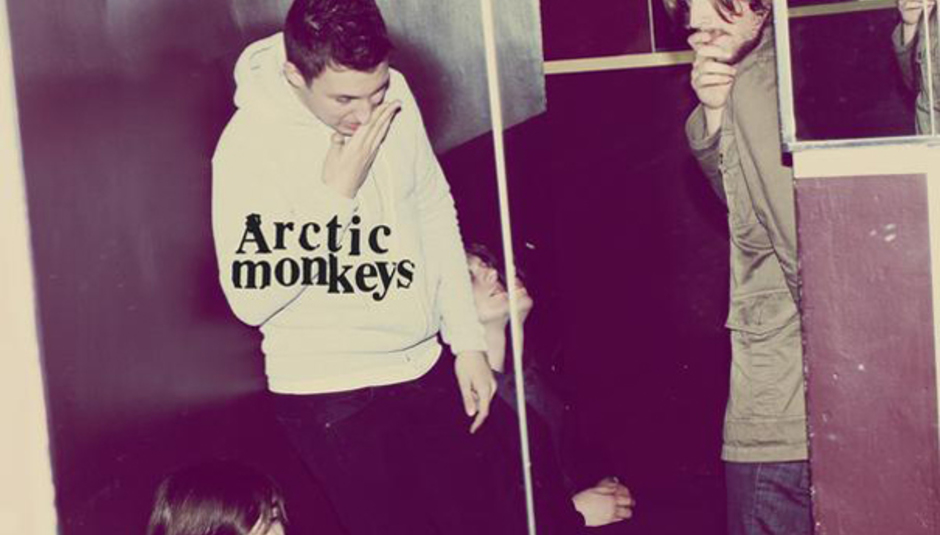 Ahead of its release, DiS got a first listen to the forthcoming Arctic Monkeys' album Humbug, co-produced by Queens of the Stone Age's Josh Homme and James Ford.

A sparse calm before the drums. A half-whispered "If you can summon the strength..." and we're off into the shadowland of Desert Sessions and the soaring bruised-rock of PJ Harvey's Rid of Me. It sounds a tiny bit like Rated R without the bombast of 'Crying Lightning', speaking of which...

Having listened to this via their MySpace a few times, I still can't decide whether Alex has become a lazy parody of himself (with lyrics about pick'n'mix and doodled imagery) or whether he makes his northern-mannered pub-poetry seem so effortless and so natural that it comes across a bit fake. Still, whilst some may say it sounds like a departure, these people should probably go back and listen to 'If You Were There, Beware' as it's pretty much the same track just with bigger bollocks and a better melody.

This one has the same groove as 'Old Yellow Bricks' and isn't unlike that sloppy/choppy/jagged-sea feeling of much of Songs for the Deaf, with odd little drum breaks that click-clack just when you don't expect it. The bass-line which drives the track sounds thickened like double cream and has a Muse-ish pixelated quality to it that they nicked off of Millionaire/dEUS. Some great tumbling parts can be found dangling beneath this one and cranking it up only makes it seem better. Builds and builds into giant storm trooper riffs. 'Dangerous Animals' also features some of the best lyrics on the album like "I'm pinned down by the dark..." and "D.A.N.G.ER.OUS! ...so let's make a mess, lionness!"

And then the earth (the rock) falls out from beneath you and Alex is all megaphone-compressed and whispery for 20 seconds before the skittering drums 'n' bass tumble in on a breezy Beatlesy guitar line. Twiddly guitars, the word "indignant" and that ghost house feel of Favourite Worst Nightmare descends. It builds and builds 'til that clown-faced fairground feeling pinches the cheeks of the mardy "fools on parade" refrain.

Juddering sums up this one. There are some semi-biographical lyrics about the malnourished and then, halfway through, in comes that ominous Josh Homme trademark of Thor-like backing vocals racing across the track like thunderclouds. The song then breaks down into some kind of bashed-up 70s glam groove, complete with kettle-steam ooh-woo-ooh's.

'Fire and the Thud'

Pace drops, the tambourine shakes, the ghosts keep hovering (feels a touch more like the ghosts of cowboys on this one, than the ghosts of indie-pop past) and Alex does his sweet wide-eyed kitten-y cute vocal part. It gradually builds and builds until a telecaster bursts in. And it ends with things slo-moing to a vinyl-being-stopped whirr.

This sounds really out of place, like some kind of acoustic jangle-pop. Not quite 'Be Here Now' wrongness but certainly has a whiff of will-skip-this-one-forever-more to it. Has none of the album's lingering guitars but will probably be the big radio hit around Christmas.

The skeletal slightness is back. This, like a lot of the album before it, sounds like a swamp-side sing-song (picture that scene where Nick Cave is cradling Kylie on 'Where the Wild Roses Grow' then imagine a band crashing in as the song ends). The whole record has either blustery bullets of hail or, like this one, an early morning mist to it, which is odd when you think how dry the Death Valley desert is where they recorded it - I guess you can't take the dank British weather out of a band so steeped in it and they'd be nothing without their geographic anchor. Again, this one gradually builds with quivering guitars and then ends with a drum solo fade out.

A church organ... then BOOM! A riff high on meth, drums rolling like a runaway train: this is exactly what I expected Homme to do with them. Huge moments make way for quiet organ moments so they can slap you around the head with a gigantic riff and lyrics like "what came first the chicken or the dickhead?" Speeds up at times like Descendants or Pennywise and slows to a Kyuss-like groove.

Did they head to Vegas? "At the foot of a house of cards, you thought you'd never get obsessed," maybe. Yet more Doors-like sinister balladry, darkened slight grooves, ricocheting drums... This one's like a giant fade out, it's less of a whimper and more of an inky full stop running in the rain. And then, no sooner has it started, it's all over?!

Conclusion: Probably not the album your average Oasis fan would want them to make (they won't find it unlistenable, it's no Liars-like ear-fuck). Possibly not the classic rock album that will assure them an Iron Maiden like future. Definitely an interesting clusterfuck of textures, ideas, time changes and production suss, topped off with Mr. Turner's lyrical dexterity. The whole record ('cept 'Cornerstone') inhabits a haunting, misty, murky swamp land but it's hardly some brash metal record that the Black Sabbath mentions in interviews hinted at or a meddling Josh Homme could easily have attempted to turn it into.

Humbug sounds resolutely head and shoulders above most indie-rock records released this year and is certainly the sound of a band doing as they please, to please themselves and if the fans like it too, that's a bonus. There's no track that instantly stands out like '505' (easily one of the best songs written this decade!) but it's certainly a brave step forwards from a genuinely special band. 9/10.

Humbug is released on August 24th 2009 via Domino Records.

In Photos: OFF Festival, Poland