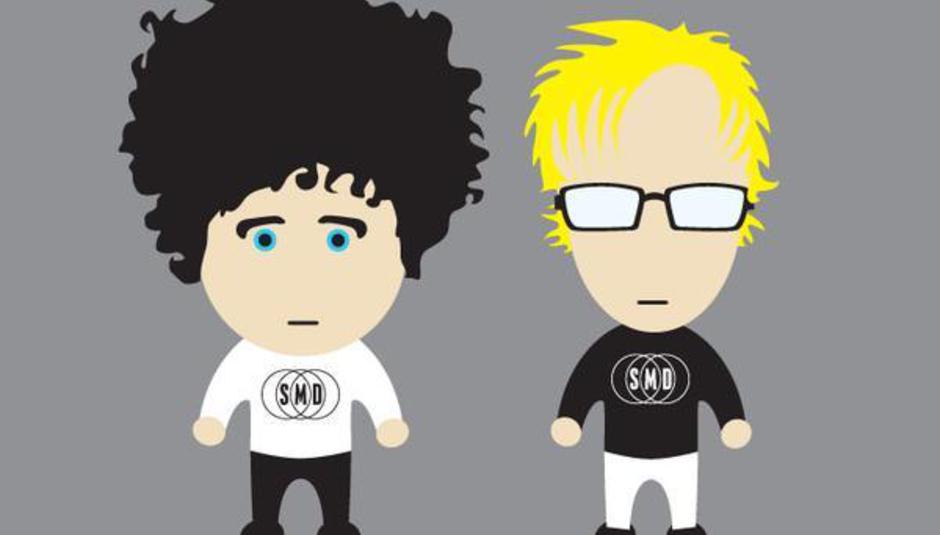 I love it when this happens. For this week is a genuinely mixed-up, schizophrenic bag of sevens that has something to recommend almost every genre you can think of. In the end I am plumping for the ambition and modernity of the caffeinated, fuck-up funk of Debruit, because he is new. But quite honestly there are at least three standout winners here. It seems to me that Civil Music are doing a grand business of building up the roster all other labels cannot help but leer at in envy, what with them already having both Rusko and Drums of Death in their marvellously modern little stable. To top it all, they’ve now bagged themselves some deliriously good glitch-hop, courtesy of débruit. And even if this hadn't arrived with some cardboard glasses and a MMMMMMMNNNNNLOVELY graphics-heavy, thoroughly original 3-D video, I would still have spent the last month itchy with ants to write about how good it is. It’s not that it uses superfast Stevie Wandering synth scales, or that it wafts appealing funks of early-90s Philly soul in your direction. It’s that it wraps all this up in a very modern, malfunctioning sort of way, taking wrong, repetitive and unusual turns pretty much every few bars. And then that these turn out to have been the right moves all along.

Pastels/Tenniscoats - ‘Vivid Youth’ / ‘About You’ (Geographic)

Heavenly is what this is, reminding me of Summers past when the best and only thing in my wardrobe was a ‘Teenage Fanclub T-Shirt’ Teenage Fanclub t-shirt, a pair of denim cut-offs and some 18-hole DMs with ribbons in them. I thought all would be well in the world if I only married Gerard Love; it was the curly hair what did it. Now, a thoroughly frightening number of years later, someone thinks to post me a copy of the Pastels/Tenniscoats single and really, honestly, not much has changed. The cut-offs have gone, having become so full of soft, fraying holes that it would have been vulgar to continue wearing them. But I still get inhuman amounts of pleasure from charity shop finds, still find myself utterly moved by Love and his merry pals’ wholesome and naïve approach to richly fuzzy love songs. But that being quite enough misty-eyed nostalgia for one day, I will also tell you that this is uncommonly lovely, deceptively simple and achingly sweet.

Yes, it’s a list song. But what an irresistible little list it is. And as our protagonist (Yeasayer’s Chris Keating) twinkles along, name-checking and claiming to share the appealing characteristics of Bill Murray, the Sultan of Brunei, Bob Fosse, Mama Cass, Joey Ramone and James Joyce, you start to wonder whether there have not been days in your own romantic life when you felt a little like this too. At least if you’re honest about it. Has there not once been a time when - faced with an unconvinced beau – you started to wonder why when you were so undeniably, obviously brilliant, your lover did not concur. Or as SMD would have it ‘I got it all / Yes it’s true / So why don’t I get you?’. I mean, even the title is a screaming neon sign of ridiculous self-importance – the audaciousness of massivity, everyone! It doesn’t really even mean anything except that it does tap into those moments when you quite fancy yourself. Anyway, what all this means is that despite my review shilly-shallying, there is life in the old electro-pop dog yet. And that if bands will continue to run bellowing into that particular genre cave, they will need to be at least as good as SMD, or it is not worth bothering, SMD will smoke them out. More ‘Endless Art’ or ‘Fifty Ways To Leave Your Lover’ than ‘We Didn’t Start The Fire’ then. It is also quite stupendously fun.

Mirrors - ‘Look At Me’ (Unsigned, available at Pure Groove, here)

Brighton’s Mirrors are calling themselves ‘Pop-Noir’ in a press release big on shouty capitals that also appears to be some sort of deliberately amusing art manifesto. We needn’t trouble our pretty littles about that though, because they come brimming with New Order’s calm way with a dubby melody, wide-skied wooshes and I get extremely excited about how warm their sound is before it does that abrupt stop thing - as if it has fallen, lemming-like, off the pop cliffs the song itself ascends. ‘Look At Me’ is special in an unassuming, stealthy sort of way, beckoning you into Mirrors’ sun-bleached, but melody-rich world with a knowing nod, and I am glad to follow. Really, really good.

One trusts that those of you who caught Gold Panda post being pissed on at Field Day are now ready to put your pocket money where your mouth is. Because if anything, his second EP is better than his first. My personal favourite and best ‘Police’ is about as uncomfortably techy, tetchy and spookily merry-go-round–like as they come. It's all swirling pipes and tinnily percussive hi-hats that sound very much like slaps in the face, before it surprises and jumps in with some thoroughly pretty wobbly house melodics. Meanwhile the title track takes folk riffs, handclaps and traditional Indian sitars before running a bewitching riot with all of them - an upsettingly short two minutes.

No doubt some will baulk at ‘Zero’ on which Malcolm has picked up his perkiest pop hat and wedged it down right over his eyes. Not me, because I am one of the ones for whom Malcolm now makes perfect sense, as if his prior outings were teasers for the Main Event. It's even got what I believe we are meant to all a drum ‘workout’ and a talky excursion in the middle. He’s such a deliciously dastardly little bastard on 'Zero' though, because it’s topped and tailed by Folk-Indie Malcolm, meaning that when the song proper launches, it takes you utterly by surprise. The overall effect is almost - and Lord only knows I am afeared of invoking advertising mythology - a little bit You've Been Zeroed. Because as a single, this has about a million bits to it, and all of them are grand and unexpected.

Holy Ghost (almost) snaffle the bassline from ‘Don’t You Want Me’ before embarking on a synth pop excursion that owes a very welcome debt to George Benson’s ‘Gimme The Night’. Supremely lovely, and - joy-of-joys - entirely free, here.

12” release for the first track off Hot Sauce Committee Pt. 1. Remember them for the piano breakdown in ‘Song For The Man’. Not for this, which falls into the ‘shouty/disappointing’ camp and is sadly threatening to trample on happy memories of my youth. I’m keeping that skateboard in the cupboard, for now.

Antony And The Johnsons - ‘Aeon’ / ‘Crazy In Love‘ (Rough Trade)

Let’s face it, this man could turn ‘If I Had A Hammer’ into a slit your arteries sadpop swansong. Me, I’d like to see him have a bash at South Pacific’s ‘Happy Talk’.

Kill It Kid - ‘Burst Its Banks’ (One Little Indian)

Still a spectacularly odd proposition what with their amalgamation of spookily Moyet-redolent vocals and swamp blues. And while Kill It Kid are about as far away from my cup of tea as it is possible for a seven inch bit of plastic to be, I would be rather disappointed if bands like this were not about, doing entirely their own thing.

The Twilight Sad - ‘I Became A Prostitute’ (FatCat)

I love The Twilight Sad’s run of enormously creepy sleeve artwork. I do not love the title of their single. I do love the song itself. Swings and roundabouts, is it not?