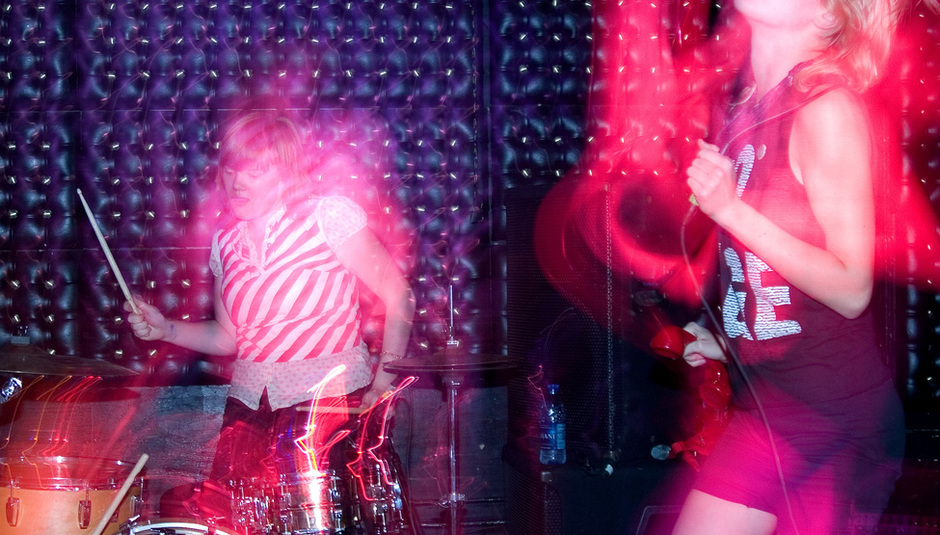 In part 28 of our infinite (hopefully) set of label profiles, the subject is Post Present Medium. Set up by Dean Allen Spunt of noise-rock duo No Age, it has gone from strength to strength, with the current roster including Abe Vigoda, Wavves, Mika Miko and Silk Flowers. DiS had a brief chat with Dean the other week...

So, as these things usually begin...how did Post Present Medium start off? What spurred you on?

It started in 2001 when I was a wee child. I saw a band I really fell in love with called The Intima. around the same time I got in a car accident and got a settlement which allowed me to pursue my dream of losing money in a record label. I designed and silk screened that first release and after I didn't sell any of the records I sort of forgot I had a label. When Wives (my former band) started, we recorded some music and we had nobody to release it, then I remembered I had a record label, so the second release was the first Wives' 7".

Obviously being in a band yourself, you've got an experience of dealing with record labels and “the industry in general”, has this formed the way PPM works as a label?

Yeah it has. I try and run it the way I would want a label run as a musician or an artist. Being in a band has helped me make the label good, I understand the things that only a touring artist can, like Gregg Ginn, or Jay-Z.

You're obviously signed to Sub Pop with No Age, what with them being, for many, the 'ULTIMATE' Indie label having reached legendary status, did that influence you at all?

Yes. Sub Pop is a label that I think is incredible. Along with SST, Touch & Go, Rough Trade, K etc... After we signed to Sub Pop it gave me incentive to take PPM up a notch, I got really excited going to the Sub Pop offices and looking around, dreaming one day I could have an office with a beer machine and a yoga studio inside too!

You've got a few bands on your label who are of a similar sort of ethic and sound (Abe Vigoda, Wavves, Mika Miko)...is this intentional, or is it just the sort of stuff you want to be putting out?

I try to put out things by friends or people who I think share my aesthetic. I consider these people "lifer's". All the people I choose to work with in one way or another are dedicated to their art to a ridiculous degree. To me those bands all sound extremely different so the PPM aesthetic is 'work and fun' and the bands I am putting out click with me somehow.

Have you ever toured with a band, or played a show with a local band and been so blown away that you've wanted to put out a record by them?

Yes, it happens a lot where we play with people and I'm super stoked. We played with a show with Sex Vid in Olympia, Washington and Gun Outfit opened the show. I was blown away and asked them to do a record, and now they are on PPM. It's rare that happens, but when it does it is beautiful.

Do you ever listen to a band and think “that's a PPM band...” or “no, definitely not.”. Is it an inclusive or exclusive thing? I can't imagine, what with touring a lot, that you've got all the time in the world...

Hmmm, I think it's a weird one. I hear a lot of stuff, people send me stuff all the time, some I don't know, some are friends and I just can't put out everything I like. I can put stuff out that I feel will fit on the label and will serve a purpose though, some things just click with me and most the time when i find something I like a lot. I'm lucky enough to be able to put something out. I don't know what a PPM band even sounds like, and I like that...

I'm very disorganised sometimes. Luckily I have a few people that help me run the label now, which is awesome. I still do most of the stuff myself but there is no way I could run it alone, and my distributor, Secretly Canadian, is amazing. It's still pretty small scale, which I like, but it seems to grow a little every day, like a small puppy or kitten.

What have you got lined up this year in the way of releases?

And what other things have you got planned as a label?   I'm starting a sub-label with designer friend Brian Roettinger to release stuff together, not really music, just whatever we want like zines, posters etc... PPM is still going to put out good challenging and fun records for you and your friends to enjoy, just trying to be a good influence.

Tell us about some of the bands on your label who aren't so well known in the UK... bands like Silk Flowers, White Shit, Soddam Inssein and Party Fowl...what have they got coming up?

Well, Soddamn Inssein and Party Fowl are no longer bands. Silk Flowers are the new shit. Beyond light years ahead of shit, super minimal and great. You should listen to them. White Shit comes out in September and it is a new hardcore band from Andy Coronado (Wrangler Brutes, Monorchid etc) and Jared and Cody (Big Business, Melvins) and they are fucking great. The UK will know these bands soooon enough.

What do you make of Wavves' rapid rise? It seems like the microscope was on him pretty intensely for a while and then when something broke, people jumped on it (and him) pretty heavily...

Yeah it's a weird thing, people seemed to hype Nathan up too much for anybody's good. It must be a hard thing to deal with, but I stand behind the PPM 7", that is a good fucking song.