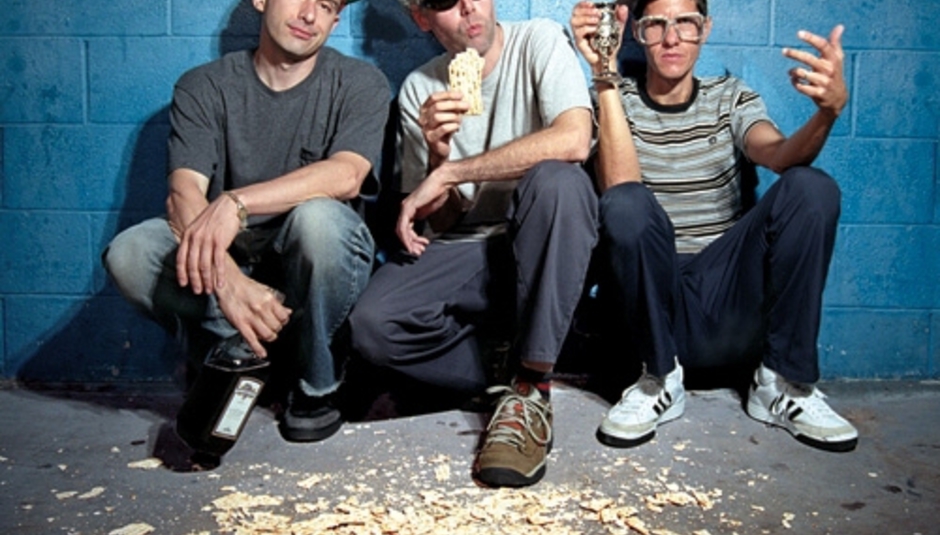 Rarely knowingly 100 per cent serious for long enough to prise a straight answer from them, New York City’s finest rap crazies the Beastie Boys are back in the house imminently with latest studio album Hot Sauce Committee Pt. 1.

Their fully vocalled-up return to form after 2007’s instrumental set The Mix-Up, it’s due to be unleashed on 15th September 2009. And the record, on first listen (click here for our notes and remarks on the record after a cursory listen), is sounding like their best since Hello Nasty, featuring collaborations with Nas and recently renamed pop-hop miss Santigold.

So DiS cornered the boyishly good-humoured Adam Horovitz (aka Ad-Rock), Mike Diamond (Mike D) and still slightly half-asleep Adam Yauch (MCA) in a tastelessly tasteful London hotel room – matching fabric wallpaper and mannequin clothes stand, you say? – for the low-down on the record, collaborating with Bob Dylan and appearing on 30 Rock. In between their vaguely surrealist conversational tangents and pushing tongues massively inside cheeks, that is...

DiS: If this is Hot Sauce Committee Pt. 1, then that suggests there’s another part to follow?

Mike D: Yeah. ...Pt. 2 is pretty much done. Basically we were making ...Pt 1, had too many songs, so we recorded some more songs. Which sounds bizarre but it actually worked out, because it made it clear to us which songs were going to be on ...Pt 1. Then we had this whole other album of songs: ...Pt 2. ...Pt 1’s going to be your regular CD in the stores and to download, but ...Pt 2 is going to be released in...we’re still figuring it out, but a different way. More of a 2009 style.

Ad-Rock: MP3s could just rain from the sky.

Mike D: That could be it. Or you could get in the shower one day and, boom, all of a sudden you’re showered with MP3s. Or we might send people a seven-inch every few weeks, so you have a whole box set.

DiS: Did you have a backlog of rhymes after going instrumental for The Mix-Up?

DiS: Is there a big vault of unreleased Beastie Boys material somewhere then?

Ad-Rock: There is. Well, everything’s digital so it’s a small vault. Most of it should not ever see the light of day.

Mike D: That’s the main reason it’s in a vault.

MCA: There's a sign on the door that says ‘Shit Factory’. I’m not sure exactly what that means...

DiS: Nas and Santigold appear on the album but there’s no sign of, as previously claimed, Bob Dylan. Was that, in best Beastie Boys tradition, a cheeky fib?

MCA: We sampled his ass.

Mike D: He has a radio show on satellite and he was speaking about Beastie Boys...

Ad-Rock: He played one of our songs and was talking about us; he’s a big fan.

Mike D: So we collaborated with that.

DiS: Is he one of your big musical heroes?

Mike D: Oh, first off, he’s one of the first b-boys, if not the first. What more to say?

Ad-Rock: Billy Joel is the fifth b-boy. That’s just a side note. Bob Dylan is one of the greatest songwriters of all time.

Mike D: When you think ‘songwriter’ you think him, Gordon Lightfoot; there’s not many others.

DiS: Nas shares the mic on ‘Too Many Rappers’. Did you hook up with him in person?

Mike D: First off, that’s a serious allegation. Hooked up? To say that we’re involved sexually with him...

Ad-Rock: It was one of those things, like we gotta do something together some time. We asked, Nas got back to us and did it, like the true professional he is.

DiS: He fits so seamlessly into the track it almost suggests he could become a fourth Beastie Boy...

MCA: To be completely honest we sent him the track, he sent us his vocals, then we put our vocals onto it. So we weren’t in the studio at the same time, but we hung out with him afterwards.

Ad-Rock: It’s more like we’re three additions to him.

Mike D: Does that make us all together like a Minotaur?

MCA: Next time you see Nas you could ask if he feels like we’re a four-headed monster, I guess.

Mike D: Hopefully the song sounds like we were all in a room together, though we were not.

DiS: Is the track’s titular sentiment related to there being too many rappers in New York?

Mike D: Show him the picture.

DiS: It all makes sense now...

Ad-Rock: That’s our competition right there. That’s what’s keeping me up at night.

DiS: There are moments on the new record where the production sounds more ‘pop’ than, say, your last non-instrumental album, To The 5 Boroughs...

Ad-Rock: This is more pop than our previous records?

DiS: Well, there’s an almost super-producer slickness to a couple of the tunes...

Ad-Rock: Yeah, I definitely agree with that. Ha ha. It’s just Midas touch with us, you press play and it’s like [affects almost orgasmic sound].

Mike D: Some people can’t help it, in terms of their pop prowess.

DiS: What’s the album's cover art all about?

Ad-Rock: What was your reaction?

DiS: Err, like you were hiking to a Phil Spector wonderland?

MCA: Would you believe we built a time machine?

Ad-Rock: We’re going into our time machine. You feeling that?

Mike D: It kind of like Stonehenge. You can perceive it as just a formation of rocks, but how did it get there? What made these things appear? There’s different levels and different interpretations.

Ad-Rock: Or maybe we’re going to the movies? Or a restaurant?

Mike D: We could be going back in time to Wimpy.

Ad-Rock: Or Noggles. It used to be a fast food burrito house.

Mike D: What were those things with pretzels with cheese inside?

Ad-Rock: They still have those! Combos. They’re fucking good.

Ad-Rock: Fuck yeah. Are you kidding? You eat a lot of those. You ate those at my house years ago when we made spaghetti with combos.

Ad-Rock: Yeah, it was really gross. Mashed up combos. You live and you learn. You’re never going to know unless you try.

DiS: As certain elements of this interview may support, you’ve always enjoyed toying with the media. Is that something just to keep amused during arduous press days?

Mike D: It’s a heavy, heavy allegation. You know what I’m going to do, because you seem like a very nice guy? I’m going to give you 30 seconds to rescind that and pretend these heavy duty allegations weren’t made.

MCA [deadpanning]: Why don’t we all get up, walk out, walk into the room again and start again...

DiS: So what has been the worst interview you’ve ever endured?

Mike D: I had a radio interview one time and about one minute into it, if that, the guy just said ‘You know what, let’s not even do this’ and hung up on me.

MCA: I had one of those too. A morning radio guy.

Mike D: Yeah it was a similar thing. Touchy guys.

MCA: I wonder if it was the same guy?

Ad-Rock: They get really angry if you’re not screaming at their volume.

MCA: I told the guy ‘Are you Howard Stern?’

DiS: How was your recent guest slot on [top US comedy] 30 Rock?

Ad-Rock: We’re on a lot of TV shows so it’s hard for us to keep up.

MCA: These two guys were on 30 Rock. I missed out. I had a prior engagement.

Mike D: What was really great was working with such illustrious actors as Alec Baldwin and Alan Alda. I mean genuinely TV legends. To be in a scene that contained a tight embrace with those guys...

DiS: Do you play yourselves?

Ad-Rock: We’re playing ourselves in more ways than one. You know 24? That was supposed to be me. I turned it down and gave it to Kiefer Sutherland, ’cos I wanted to work with these guys [gestures at Mike D and MCA].

DiS: Any other favourite comedies you’d like to appear in?

Ad-Rock: Maude, with Bea Arthur, from the seventies.

MCA: Curb Your Enthusiasm is good shit. If Larry David wanted to bring us on, we’d be there.

Mike D: I can second that: this is a standing offer and a challenge to him. Bring us on.

Ad-Rock: What about The Mighty Boosh?

Mike D: I’d also like to mention that the band is looking to get heavily involved in West End theatrical productions.

DiS: Like a Beastie Boys version of the Queen musical, We Will Rock You, perhaps?

MCA: Which Billy Elliot do you like best, Mike? Because there are three young boys that play Billy Elliot?

Mike D [laughing]: Well, yeah, I want all three. So we would need nine little boys to really pull it off.

MCA: Can that be a pull quote in this article: ‘We need nine little boys’?

Hot Sauce Committee Pt. 1 is released on September 15th. To find out our thoughts on the record on first listen click here