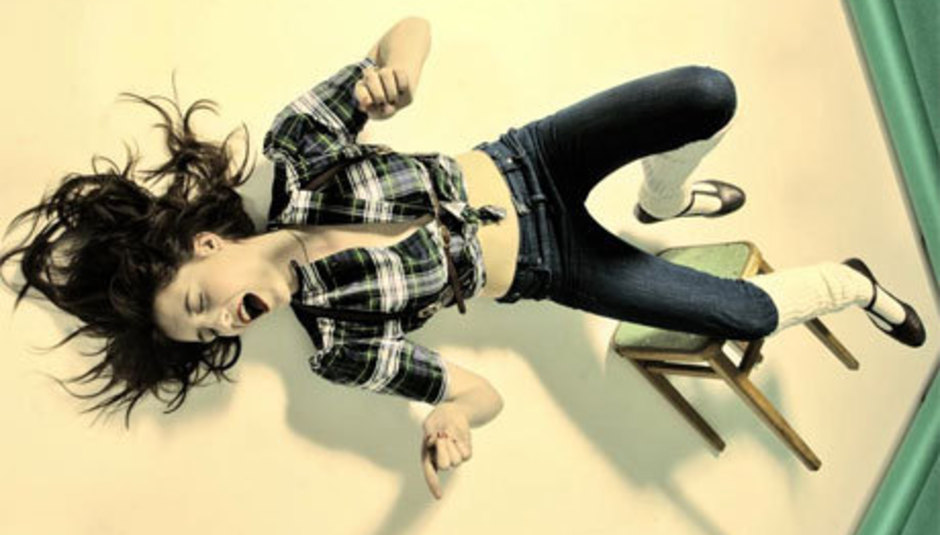 This week we are transmitting not-quite-live from North Norfolk, where across the plains of the caravan park I can hear the strains of Fleetwood Mac trying to make themselves heard through a tinny radio. I have also been fortunate enough to catch a very spirited rendition of ‘Wind Beneath My Wings’ from a fellow camper (on the bog), while I was merrily dodging medieval verrucan foot complaints (doing the shower block dance). So while I want to just sit here and greedily lap up the given names of each house-on-wheels (‘Miami’, ‘Pageant’, ‘Senator’ and my favourite and best ‘Pastiche’) I have instead dutifully donned my headphones for FloMo, Johnny Foreigner and lovely lovely lovely La Roux. Yes, I said 'lovely' in the same sentence as the words ‘La’ and ‘Roux’ – you will just have to deal with it. I realise it is parlous to draw attention to the appearance of a pop artiste, but I am going to do it anyway. Because if anyone has ever looked more fetching while clasping a gigantic fluffy bunny rabbit / wearing French knickers / standing beside a 60s rose-tinted sink, toothbrush holder and mirror all-in-one, I have yet to see the picture. But this is merely a sideswipe, a gnat, in the general picture of how brilliant 'Rabbit Heart' is. It’s not just that it's lyrically leagues ahead of the competition. Or that it sounds ‘real’, even though ‘real’ is one of the most unfortunate, dreaded and awful words one can use to describe pop music. It's that 'Rabbit Heart' just doesn’t come unstuck - not even for a second - while in solid pursuit of all that drama. Chucking around images and ideas as if your iTunes were some sort of gloriously untapped, empty stage, it’s as if Florence has settled down behind the pixels and binary to make everything - all those grey song titles, all those bands who languish unplayed and forgotten - and has busied herself so grandly that all - everything - is suddenly widescreen Technicolour. ‘This is a gift, it comes at a price’ sings Flo. And at seventy-nine new pennies, that price is disastrous, uncommonly cheap.

A bit like Pavement might sound were they fronted by top rock frog Mark E Smith, this has a pleasingly ragged quality and is about as messy as a five year–old’s colouring book. Johnny Foreigner are young and naughty enough to press hard on their pencils, going through to the other side of the page. But they are also old enough to remain inside the rock lines, because ‘Feels Like Summer’ - while retaining its scrawl - does have a proper, singalonga tune. Yes, I am forcing a childish analogy, but you will have to forgive me – I have a head full of whacked piñatas from a local kiddies party. Overall, 'Feels Like Summer' is - like whacking things to get sweets out of them - pretty silly. But as Summer always struck me as the most inane of seasons, it's also a strangely appropriate soundtrack.

The Harringtons – ‘Set In Our Ways’ Listen at MySpace, here. This spends a lot of time doing that classic slow-fast-verse-chorus indie thing, in which a spiralling guitar part segues into a stomping chorus, all the better to get the crowd roused. You know, you can tell with a song like this (or at least, I am about to go ahead and surmise) that they really, really like playing this one. ‘Let’s do 'Set in our Ways’, lads’ I can hear them saying in the rehearsal space they pay much too much for. Cos it’s got a stupidly fast beat to keep the drummer happy as a mental, an awful lot of descending noodlery for Mr lead guitar chap, and an absolutely mahoosive chorus for the one what sings. Sadly for we civilians, the listening experience is rather less giddy.

We are going to talk about the b-side, a record so positively inoffensive, it quite literally apologises for itself, strum by strum. But as Blabbermouth sings (in a voice vaguely redolent of Bill Callaghan, but not nearly so distressing) that he is ‘sorry for the burden of this song’ I start to drift off and wonder about situations in which as long as you get your regret in first, no one can get upset with you. Looking like the sort of man your mum would baulk at – all matted long hair, Mr Twit beard and moustachioed menace - I want to know; is he truly, honestly sorry that his song is burdensome, or is he getting his sorry in first, just in case we are horrid about it here? I mean, as it happens, there is no need for apollies, as this is perfectly pleasant. And of course, some people think that this whole notreallybotheringness is the definition of a b-side. Unfortunately having listened to the a-side, instead of a shiny pearl, I discover it is some more ho-hum acoustic waftery, but this time delivered as if dear old Blabs were Richard Ashcroft. (Sorry).

Starsailor - ‘All The Plans’ (Virgin)

Well then, readers. Have you been biding your time, building rubber band tennis balls and polishing your stylus in anticipation for Starsailor's triumphant, phoenix return? Or do you fantasise about a world in which speakers and audio equipment are outlawed, so that no one must suffer at the hands of their comeback single? I suspect this will depend on whether you consider yourself a fan of the bafflingly fawned and fingered-over Jon Bon Jovi, because that is what ‘All The Plans’ sounds like, and it is as if the last eight years have disappeared in a puff of smoke. There they go, whoosh whoosh, and now, you’re in a pub hearing Geri Halliwell bravely murdering ‘It’s Raining Men’ while ‘Bob the Builder’ languishes at number one and you’re just sat there in the corner twiddling your thumbs, praying for an apocalypse and idly wondering what 2009 will sound like. As it happen, this is what 2009 sounds like, and I for one am a happy cat, positively beaming through all 207 seconds. Though young Elly seems, magnet-like, to have attracted her fair share of vitriol in these here parts, I am willing to argue that wrongness of tone and a dischordant vocal quality is actually precisely what converts to the Jackson/Langmaid cause are enjoying. In fact, this would be single of the week if I had not played it so many times, clinging it so hard to my chest that I have rubbed at least two layers off its perfect patina. So while you might all be making comparisons with squawking cats, I am hearing transcendent, off-kilter loveliness and an irresistible pop song about not letting some prawn waddle in and dick your heart around, ever again. Also, surely you haters can do better than ‘La Poo’?

Royksopp feat. Robyn – ‘The Girl And The Robot’ (Wall of Sound)

In anyone else’s hands, this would have been your regular Scandinavian oddpop tale of woman meets mecha. Their super shiny circuits fuse, they melt into each other - a lovely sexy ball of electrics and mangled machinery, with the synth blips and blobs reminding us of so many kisses. But with Royksopp and all-round nutty tart Robyn in charge, it is thankfully much, much more remarkable. It also sharply reminded me of one of my past lives – in which Roby was wedded to a man so inured to and swallowed by his paymasters I barely registered (even when physically in his presence). How I wish this pop song had been around to comfort me then, when I, like Robyn, would call him up every night, wanting to know when he was coming home. And to think, I couldawouldshoulda been dancing to this instead, not giving a shit and revelling in pop music that tells a story, has a point, and makes that point via outsize, swelling, man-made melody. Damn, damn, damn you, stupid release dates that are not tailored to the exact vagaries of my romantic life. Because ‘The Girl and the Robot’ is smashing. And shall be all the more so, should you too have suffered at the hands of a lover what morphed into a wordless workaholic.

Your Front Room Festival: A Guide by ...