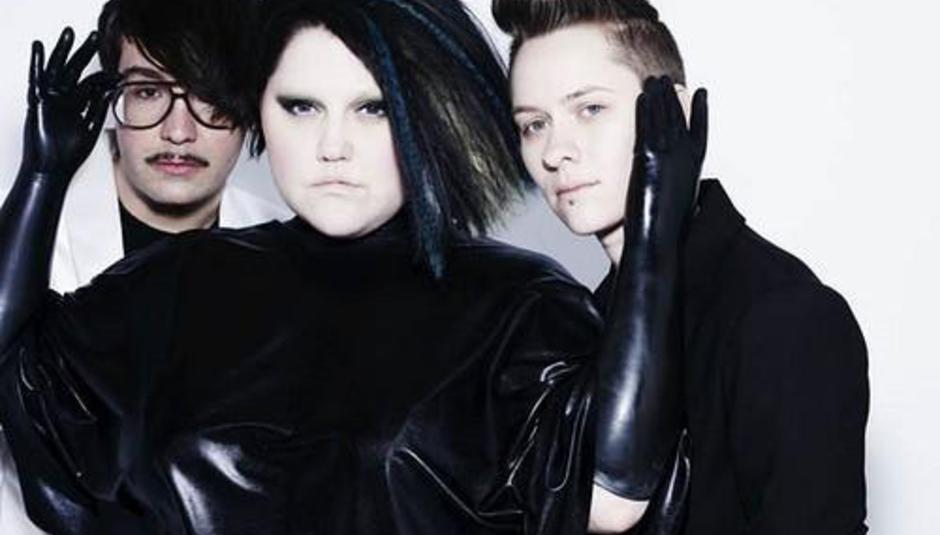 I am enormously fond of catching popstars when they are interviewed by unlikely people, as typified by Morrissey shambling up on the One Show sofa and chortling along with that bewitching, pointy-faced Irish lass. And it happened again a few weeks ago on Radio Four. There was Mark Lawson, all professionally middle-class cleverness and awfully nice chap charm, and there was Ms Ditto. And she was so unremittingly amiable, so genuinely happy and carefree - refusing to become embroiled in any nastiness - that it was like having your brain washed out with lime juice, vinegar and polish. You know, in these days of abominable celebrity, I think we forget how lucky we are when genuinely kind and unaffected people become famous, and Lord only knows, there is no faking it. ‘Heavy Cross’ is of course a call to arms, and quite honestly I can’t think of anything bad to say about it.

Copenhagen-based N&TM’s previous outing, the rather special ‘Monday’, below, was a They Might Be Giants-style affair. It has a doink-doink synth+guitar breakdown, mandolins, handclaps. And while the impression was wholeheartedly giddy, it managed to avoid veering into wackiness via the use of some lovely 60s harmonies. So let’s be clear, this lot are most definitely larking about. They do things like rhyme ‘tambourine’ with ‘trampoline,’ before singing about hand grenades. They have a song called ‘Can I Sleep With Your Friends’ which quite literally and actually includes a line about ‘cocks dripping’, albeit delivered a la Mike Love. This is very defiantly the sort of indie which jumps about, grabbing one radio-friendly device after another, trying it on, and then finding something else with which to amuse itself. But it is also almost, very nearly Shins-y, too. Eminently likeable. I see what Marina is trying to do, the wily fox. She has snuck the line ‘Do or do not, there is no try’ on to one of the b-sides and I am meant to look kindly upon her melody-rich confection. Now, I will agree that this is one of the wisest snippets of pop philosophy either committed to celluloid or to have become tangled in George Lucas’ fiddly beard. And for a moment there, I felt a strange sort of affection towards ‘Simplify’ for including it. But it was just a moment, because then I noticed the hugely mannered performance shivering up my headphone wire. You can’t deny the girl’s got pipes, and there are a squillion ideas swizzing about underneath that gloriously mahoosive hair. But I can’t help feeling that it is not strictly necessary to do an emotional sing-wobble on every third word.

Talking of b-sides, WHB have decided to cover ‘West End Girls’ for one of theirs and I have been obsessing over it all week. How did this happen? Will they say they did it for their own amusement, and then put it out ‘for japes’? Quite apart from the fact that post-Conchords it is difficult to even consider PSB’s faultless zenith without hearing the word ‘expahnding’ over and over, why would anyone do this? Remix it, if you really, absolutely cannot stop yourself. But cover it? I am not even the sort of person who gives two hoots about 'respecting the canon' and all that snobby twaddle, yet all I could think was ‘Why, God, WHY?’ ‘You Came Out’ on the other hand, is some perfectly respectable ESG-style posturing, but it's so arch, aloof and drawled out. You know, if looks could be singles, this would be the one where someone super mean and rather rude looks you up and down, and finds you wanting. Perhaps that is what they intended. Whydobandsruntheirnamestogetherasiftheirspacebarhasgonewrong? I no get it. In any event, this merry band of San Franciscans deal in anthemic indie rock of the sort you don’t hear all that often these days. It drips with BIG choruses and BIG drums and BIG undeniable tunes - a bit like The Killers but with fewer sequins, more ideas, better lyrics, and just generally a lot less shit. Singer Ann Yu recalls Karen O with a tiny smidgen of Hope Sandoval and it’s all just so straight-forwardly unpretentious and honestly presented, one feels rather churlish. Because the thing is, I don’t think I will ever play this again.

The Gay Blades – ‘Not Having Done Nothing’ (Something In Construction)

'Not Having Done Nothing' sounds like what a stroppy teen might say, were you to ask them to account for their Saturday. And this is another of those US rock bands who will do well when their music is used for a montage on The Hills or Gossip Girl. Inexplicably, I have been informed that other people are hearing Eagles of Death Metal, White Stripes, Arctic Monkeys and even Stereolab (?) in the mix. And what do I hear? Busted. Sozzypops and all that, but I think this is vile. Would you like to live in a tech house built with bricks fashioned from handclaps, double dutch foot stamps and absolutely enormous piano stabbings? Well quite, me too. This takes a tantalizing age to build (two and a half minutes!), and yet earns the right to every second of its ascendancy with the sort of wide-open-skied, cinematic grandeur for which knob-twiddlers would gladly sell their soul to Yamaha. Then Roland Clark starts bellowing about how the world is in a bit of a tizz, that one must try to resist The Man and it really goes off - all State Of The Nation addressings and go-your-own-way, fuck-‘em-all magnificence. Readers, I squeal when house music is this mad, portentous and shamelessly over the top - and this was no exception, I was grinning like a mental. If I were more of a divvy, I would say this was HUGE. But we will shall settle today for terrific. Free Enzo Elia remix at RCRDLBL here.