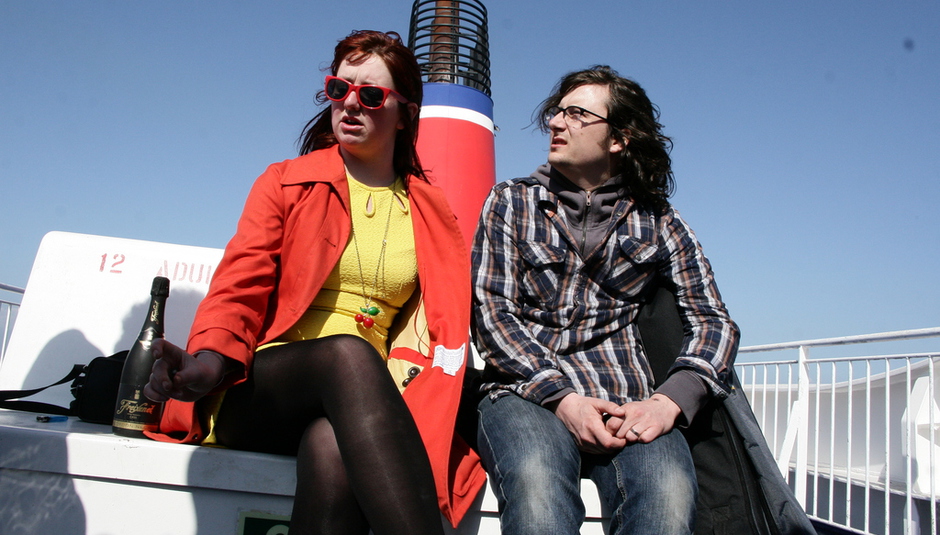 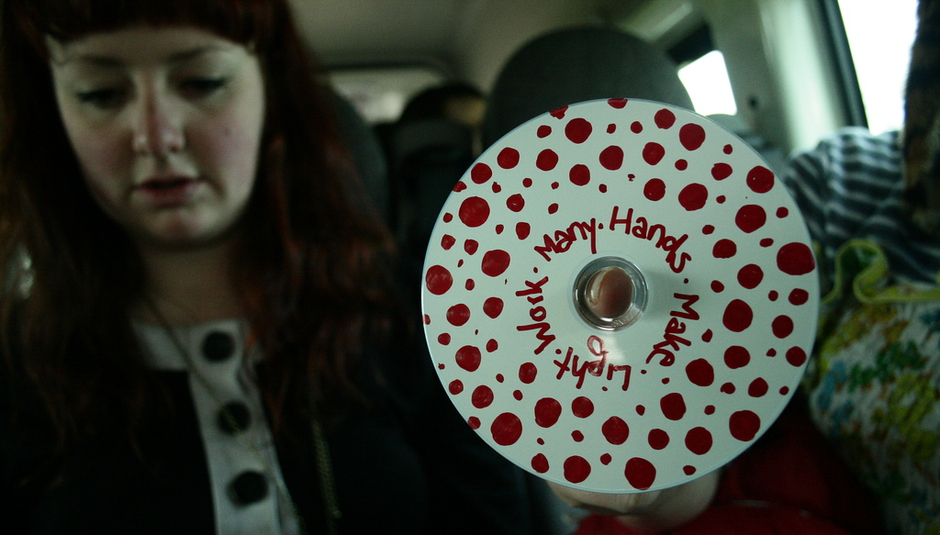 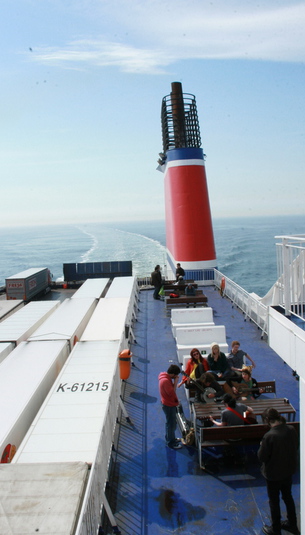 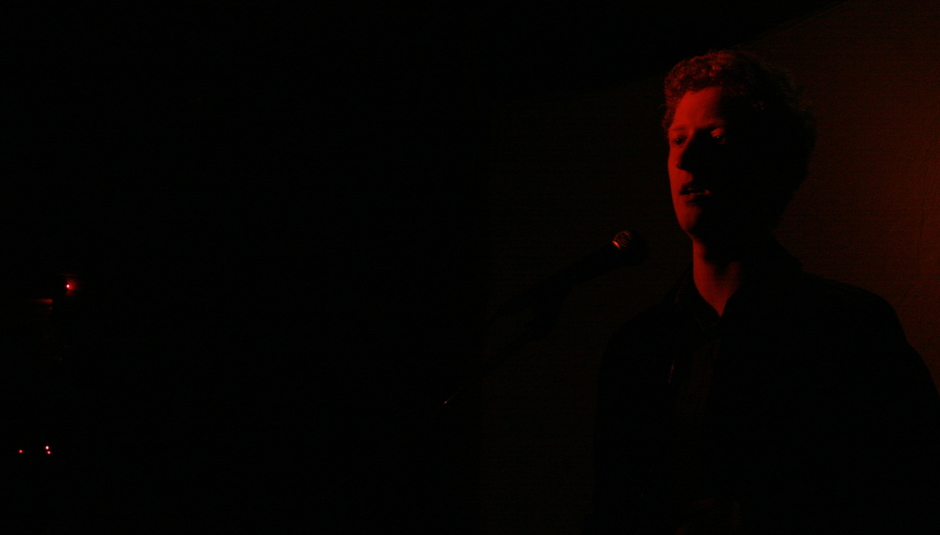 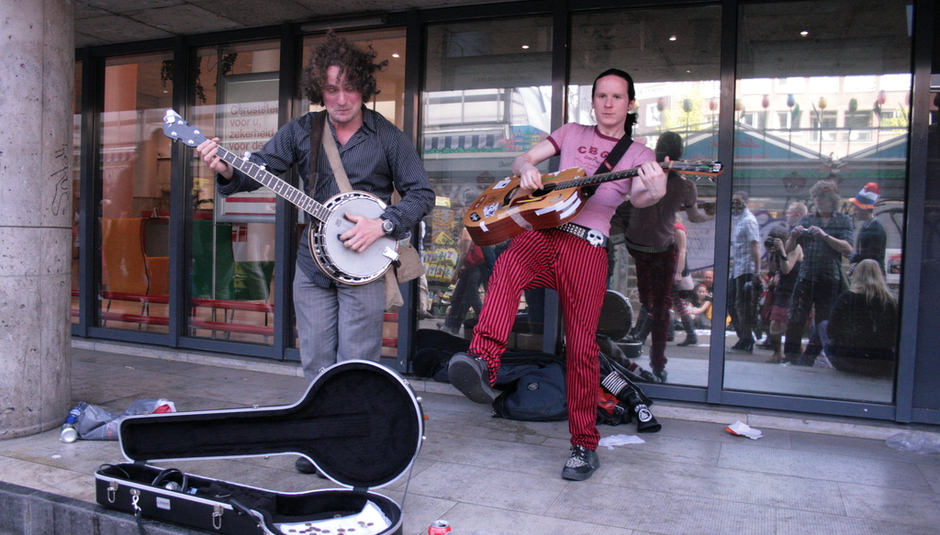 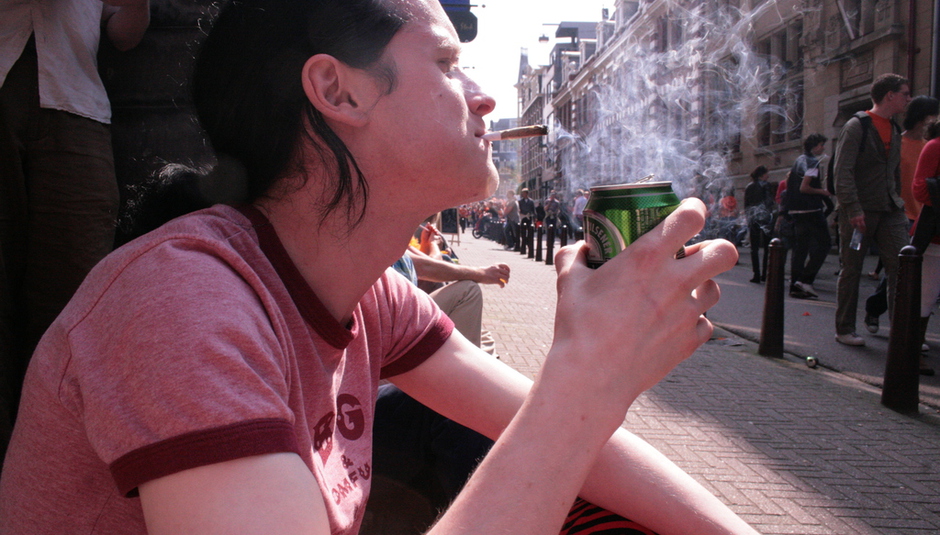 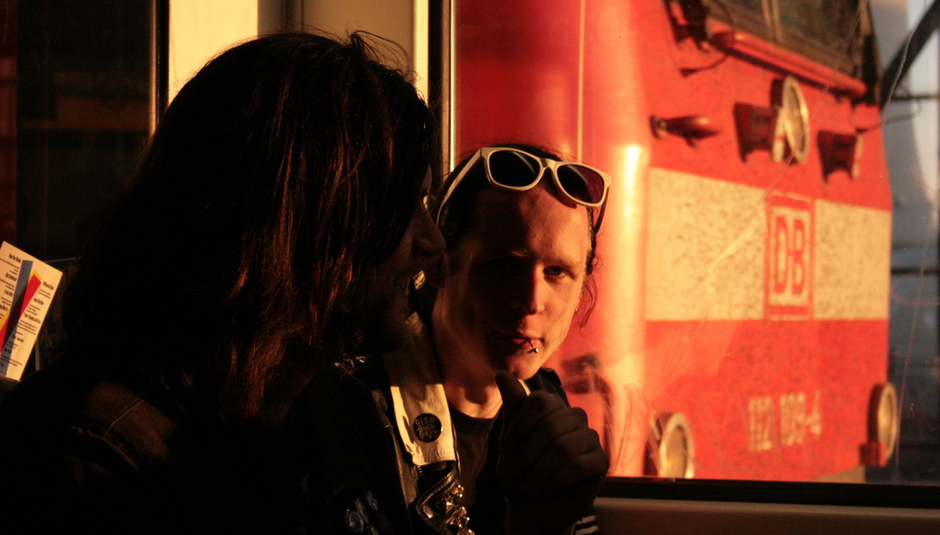 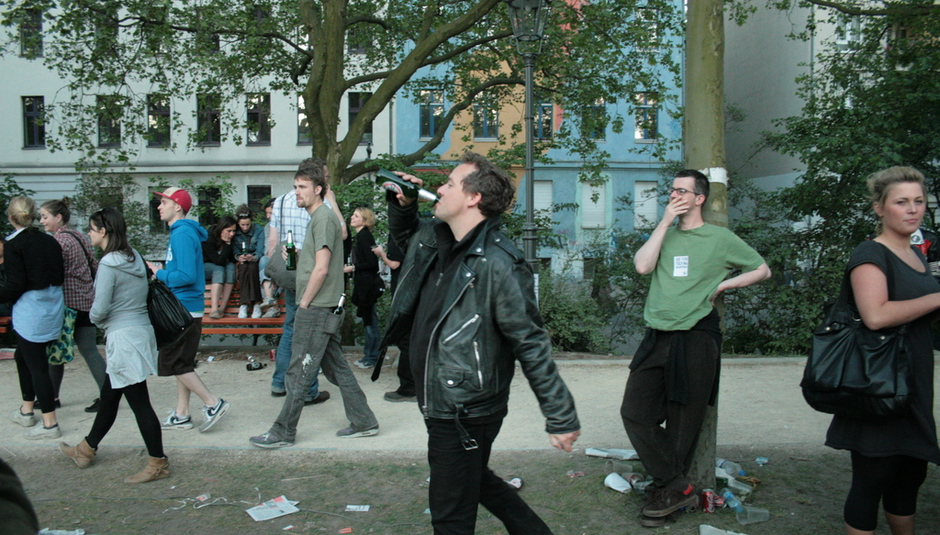 Nick Holdstock (writer, The Edinburgh Review) leaning against a tree and observing, May Day, Berlin Photography by Ericka Duffy 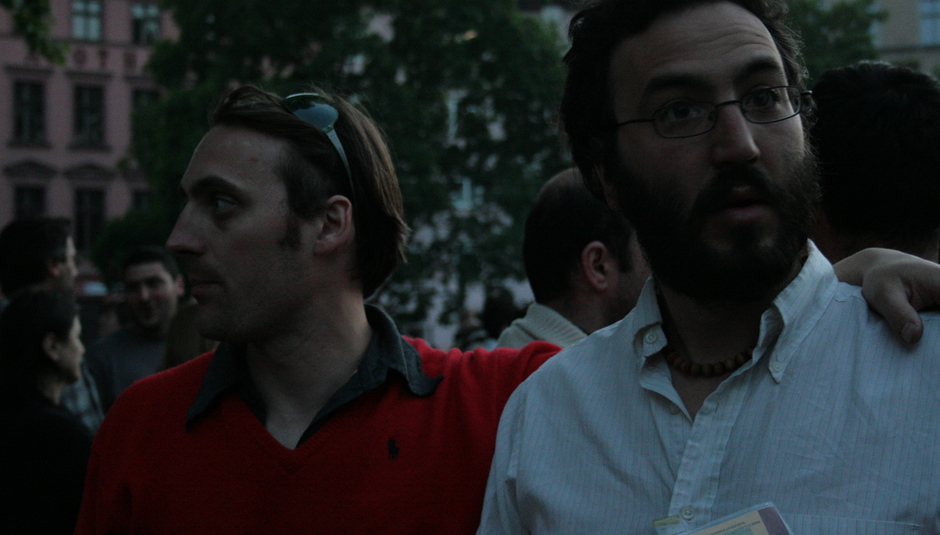 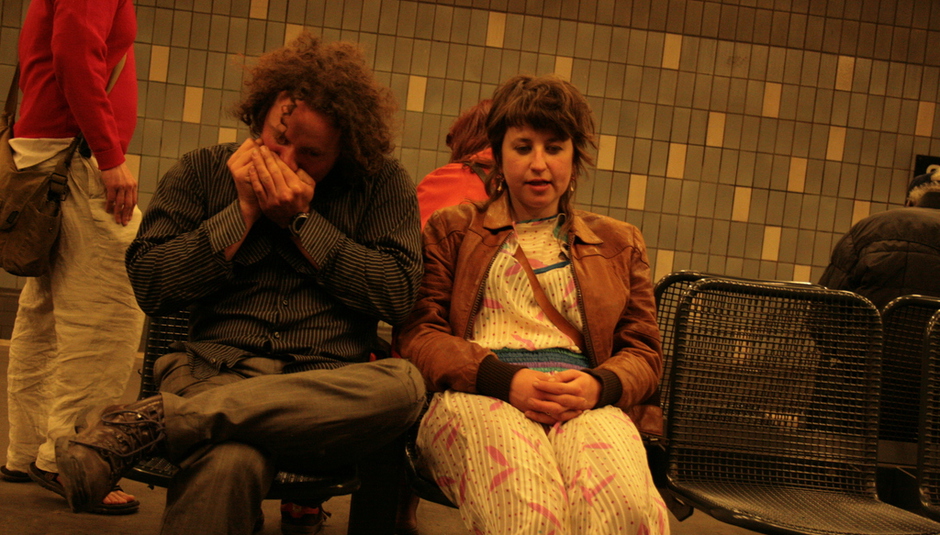 The Golden Hour began as a one-off night of music and literature readings at the Forest Café hosted by Ryan Van Winkle, the current reader in residence for the Scottish Poetry Library, in August 2006. After a rousing success at Edinburgh’s Fringe Festival, though, the entity continued, moved forward and, like anything fed and nurtured in time, has grown significantly. With the help of benefactors such as the Scottish Arts Council and the efforts of a small circle of friends, the web of endeavours spun out of this unifying event include book publishing, and reading and music tours running from the Highlands of Scotland to bustling continental metropolises. The latter is where we begin.

A total of sixteen performers have set out to Amsterdam, Berlin, Paris, London and Cambridge to bring these cities something that’s not just a gig, not just a reading, not just a dramatic performance. It’s the Golden Hour, and it’s what it needs to be – often encompassing all these things and more.

And much like the shows, this tour will prove unorthodox as well: Unlike a touring band, we haven’t hammered away together in a practice space for hours, neither do we have the backing of a label, agents or managers. With performers coming from Edinburgh, Glasgow, London and Cambridge, many first introductions had to be made. For example, we’d be sharing our circuit with The Paper Cinema, an innovative trio out of the Battersea Arts Centre presenting big screen narratives with intricate, hand-drawn puppets and video.

It wouldn’t take long for collaborations to blossom though. In fact, it was on the ferry crossing to the Hook of Holland when Jed Milroy, who has played with the Aliens and hosts a successful folk night in Portobello, pulled together Billy Liar, Hailey Beavis and Jonny Berliner for some busking on the sea. This invited cheers from fellow travellers and brought spirits high for the first of many times in our journey.

Golden Hour Tour by Ericka Duffy from EdinburghUniversitySettlement on Vimeo.

We’ll take our cue here from the title track of Billy Liar’s recently released EP: “It starts here/in the bars and the streets and the people.” In Amsterdam, we’d see our share of all three.

After docking, it was a relatively quick drive to Holland’s biggest city and, unbeknownst to us, on one of its busiest days of the year: Queen’s Day. If, in our minds, Amsterdam didn’t already have a reputation for good times and debauchery, Queen’s Day would certainly set us straight.

After an intimate reading a Café Sappho, billed as a international, multiartistic and multisexual venue in the city centre, we spent the next day in the crowded streets, surrounded by residents selling goods in the street, in what looked like the world’s largest car boot sale. However, once the afternoon hit – or maybe a little bit before for some – residents and visitors alike donned the colour orange en masse, switched from coffee to Grolsch and the city changed into what looked like the world’s largest street party.

And when we took to those streets, hopping avenues and street corners, we weren’t just busking – though the money earned paid for food and drinks – we became an actual part of the festivities, Jed’s banjo, Jonny’s bluesy harmonica and Billy’s punk spirit welcoming revellers to dance and sing along in the street past the last light of the long day. After our time on the street we headed to a large roof party, where the music continued well into the next day, before retreating to beds with dreams of Berlin in the morning.

And in Berlin, we’d find this, the answer to Jed Milroy’s plea, but not without a few setbacks along the way. In the hangover haze of May Day in Amsterdam, thieves would be afoot, taking a bag from Nick Holdstock – published in Stand and the Edinburgh Review – and along with it, a passport and keys to a flat in Paris.

But even with that early morning letdown, we followed the autobahn east to Berlin, direct to a campsite in the city centre, which would be our base of operations whilst in the city.

With a mission to drum up interest in our performance at Berlin’s Studio54 art and music complex, we headed to yet another street fair, this time in celebration of May Day, mixing in with street punks, drunks and just generally celebratory Germans in die strassen. Festivities carried on in every park, café and bar in the area for most of the night, and we worked our way from outdoor techno parties to packed trams and bars, avoiding the droves of riot control cops – a total of nearly 6,000 according to the Associated Press – who seemed ever-present after violent events of the day.

These efforts, along with those of Dirk Markham, a DJ and our host and co-conspirator, paid off, with the following day’s Golden Hour playing to a full house. After a full day of singing for their suppers – again – the musicians came in fine form at night, with concert-goers joining in on the chorus of Withered Hand’s “Religious Songs” – a tune that can swim around a mind for days on end – and dancing to Jonny Berliner’s soulful acoustic set. Dirk kept the party going after the live music, but you could feel a genuine enthusiasm throughout the entire night; from the performers, the hosts and most of all a very receptive crowd of interested and entertained people.

If taking Berlin – with its thriving arts and music scene – was a triumph for the musicians, a new beginning would happen for our readers in coming to Paris. Performing at the storied Shakespeare and Co. on the bank of the Seine, where legendary authors have stayed, slept and read, is a rare privilege, and not one taken lightly by the touring poets and fiction writers. This, given that it will be the second visit for Jane Flett, Nick Holdstock, Benjamin Morris, myself and Ryan Van Winkle, joined this time by Ericka Duffy, makes it a great honour to be invited back.

And, in similar fashion to our first trip to Paris, we’ll be extending our performance to the plaza in front of the world-renowned bookshop until the musicians’ fingers give out or the middle of night, whichever comes last. Also, passersby will be treated to the sights of London-based The Paper Cinema – a groundbreaking presentation akin to a moving graphic novel with marionettes and projection by Nic Rawling and Caroline Williams, accompanied by live music from Kora.

So we’ll keep things going for the Parisians, and in the morning, we’ll cross the English Channel in our return to Britain, bringing our ‘unstoppable and incorrigible’ (according to our sign outside Shakespeare and Co.) cavalcade to the Camden Head for Tuesday 5 May.

Jason Morton is also a writer for The Skinny magazine, available across Scotland.