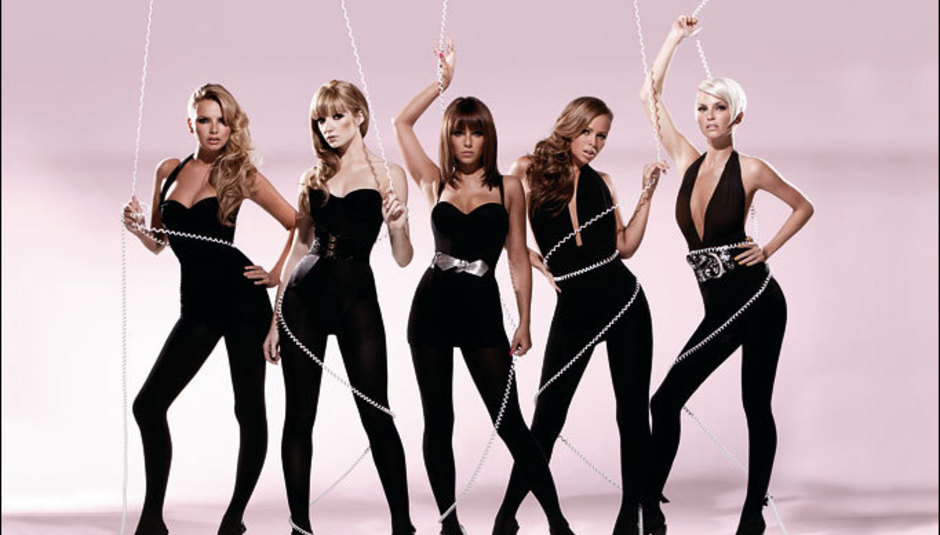 Eh Oh, everyone, it is Monday, and it is time to listen to some sevens. And my, what a lovely bunch we have this week – from shamelessly retro post-punk which overcomes its redolence quite magnificently, an absolutely blinding re-issue from The Hundred In The Hands and, of course, space torpedoes, Girls Aloud.

The Detachments – ‘The Flowers That Fell’ (Thisisnotanexit)

Now, The Detachments won’t win any prizes for innovation, let’s get this out the way. For they make post-punk that verily HONKS of The Rapture/Delta 5’s tinny, garage drums and employ a doomy jangle which will only ever invite comparisons with youknowwho. (Two words. First word: three letters. Second word: eight letters. First word begins with J. Second word begins with D. Sounds like: White Lies. Exactly). But sometimes, sometimes bands come along sounding like 9847 other artists, and you Just. Don’t. Care. For this is that rare beast, a real, actual, floor-filling indie smasheroo ROUSER, but one which does not make you cringe from the sides of the dancefloor, eyeing up revellers with sheer, lagered disdain. (No? Just me then). Anyway, I am 100% confident this is going to be absolutely massive, but cannot guarantee The Detachments will never have a TV campaign voiced by Zane ‘I know who should we get to do the voiceover for Editors - let’s get that Sihth Ifrican that can’t even pronounce their name properly’ Lowe.

AND! Free blindingly good remix from Crystal Castles’ drummer - or as he would like to be known, Parallels - here

I have been very remiss with Out of Control, hardly playing it at all. Perhaps it is because GA’s impossible, almost frighteningly polished perfection is sometimes too much for one brain or heart to cope with, but more fool me. Because as everyone on the planet knows, ‘Untouchable’ is a bird-like-arms-in-the-air runaway train, a heart on wheels of a pop song. It is all empty-stomached regret and skinny-pinned sadness. (Do you see? They really are quite thin though.) Fluffed into something even more entertaining by the addition of a video which imagines Our Girls quite literally falling like sexy bombs to earth, this has Nadine belting out a pearl of a line about "beautiful robots dancing alone" at the end. ‘Untouchable’ is quite, quite wonderful for all of its epic six (nearly seven) minutes. And it may have been the alcoholiday I have been enjoying of late, but I actually cried when I listened. Silly old me.

The Hundred In The Hands – ‘Dressed in Dresden’ (Pure Groove)

Released as a free download last year (http://thehundredinthehands.com/thith-downloads/), THITH’s superb debut gets a proper limited, proper pressing on 7” via Pure Groove this week. And it really doesn’t get much better than this. With TV On The Radio’s guest vocalist Eleanore Everdell straining and breath-ing most becomingly over some busted bass that wafts in and out, and some awfully angular DFA jangle courtesy of ex-Boggs frontperson Jason Friedman, it is unremittingly terrific. But the best thing is the effortlessly tuned-in and HD-sharp pop sensibilities – it’s as gorgeous as a Cardigans single but minus the whimsy, and so it manages to sound at once rather plaintive and yet also very perky. Love it, love it, love it.

Sounding very much like a Bloc Party who have spent months swapping xylophone tips with Sufjan Stevens or being schooled in on-stage lamplight by Adem, the original version of ‘Signs’ twinkles with delightfully reverberating melodies and building heartache. So quite why it merits being ripped up and put back together by someone as unsubtle as Armand Van Helden is anyone’s guess. But it is my duty to report what he has done with this song, and it is this; on version 2 he has stuck a mid-90s-chill-compilation kick snare on it, and he has added some really quite horrid trad house ladyvocals. Mix 1 is alright, one supposes, and middlingly banging, but when the original is as sublime as it is, adding a portion of ‘hard’ seems pointless. Also, the video - essentially it’s the sort of meant-to-be-shocking, please ban us for publicity we BEG YOU, pathetically brainless nonsense that would have made Nathan Barley spaff in his pants. But it is also laughably, grotesquely dumb. Anyway, if you do fancy a good Bloc Party remix (and you do, you do) look no further than Essex Boy made-God Hervé’s take on ‘Mercury’. Which, since you do not ask, I have chopped up for my ringtone. (Wow, I am so cool.)

Morrissey – ‘Something Is Squeezing My Skull’ (Polydor)

Right. Since this week I have been mostly reading Secret Tweet (http://secrettweet.com/), it is time for a confession of the most serious indie import. And my revelation is this - that up until 4 years ago, I loathed The Smiths. Really, properly, hated them. Partly it was just that it left me shiveringly cold, and partly it was because all the curtain-haired boypals of my youth would insist on banging on and on about them. I did make one concession - to ‘Hand in Glove’ - but that was only because it was on an advert and I didn’t realise it was them. Now clearly, I was a total, knee-jerk prannet as a yoot. But, but , ‘Something Is Squeezing My Skull’ has the capacity to send me right back into immoveable, irrational teenage hatred. Not least because it has a line in which Stephen LISTS DRUGS, and that line is woeful, not worthy of him. And so, I have decided that I can stomach Morrissey talking, I can stomach – nay, revel - in pictures of him looking majestic in suits. But I am not having this record or this continual desire to carry on, when it makes me feel so sad. It is a just like when Marlon Brando got all fat and did The Island of Dr. Moreau (and a little part of me died, never to be seen again).