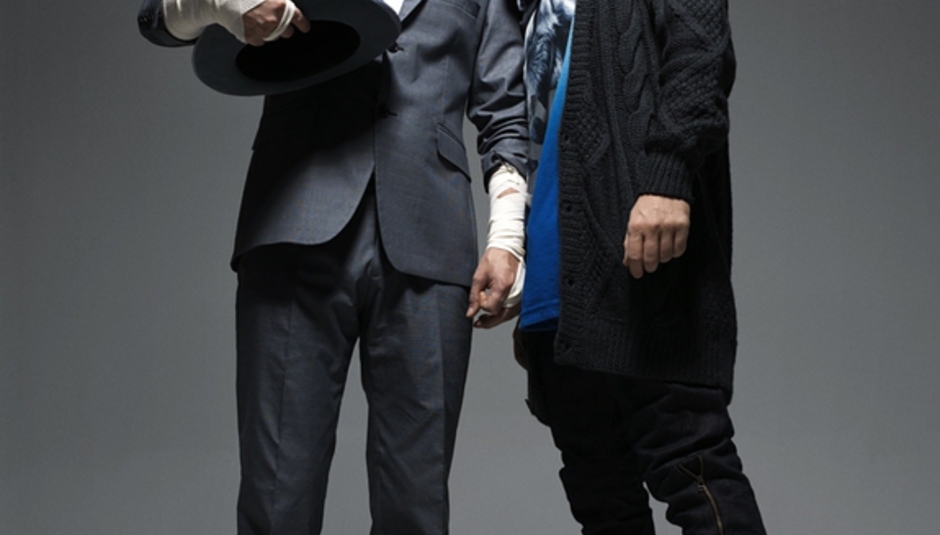 On their third album, Junior, Norwegian duo Röyksopp explore the poppier end of their sound, while its forthcoming partner Senior will chart more ambient territories. Following their performance at the Ether 09 festival at London's South Bank Centre, DiS stood facing Norway and shouted some questions over the North Sea at half the band, Svein Berge.

DiS: You trashed a laptop during your Ether gig. Are you an angry person?

SB: [Laughs] Well, it failed me! It was delivering samples to one of my drumkits and it kept dropping off. It was an old laptop, I must say, it wasn't brand new. It had been with us at least a few years.

SB: Yes, it was a veteran and it died in service; it got its Norwegian flag folded in a triangular shape and it was buried at sea. It's no longer with us. I tore the whole screen off it.

SB: I think it was more Keith Emerson.

DiS: Do you consider how you'll be able to recreate certain tracks live when you're recording them?

SB: No. We make the album and then we scratch our heads for a few months thinking, "How the hell will we do this?" We're not like Queen yet, or the Rolling Stones. We don't make music to work on a huge stage and think "Oh, now we need eight bars where people can clap their hands while singing along..." We don't have that. Yet.

DiS: Tell us about the difference between Junior and Senior.

DiS: Do you have a favourite between them?

SB: I think they both have their moments, and they're representative of how we've dealt with music since we started making it. When we were 13, 14, we were very much into the UK rave scene, as well as the techno scene in the States: Detroit techno, Chicago house. The more energetic things are obviously more appealing when you're 14 and there are lots of hormones rushing through your body. But at the same time we had a feeling inside us for calmer music, too: The Orb, early Aphex Twin, Brian Eno and Vangelis. Even Coil, just to get a bit of darkness in there. So those two sides have always been present in our music, and in the way we listen to music.

DiS: How do you decide on guest vocalists?

SB: We consider vocals to be sounds that have to be complementary to the other sounds present. Karin [Dreijer Andersson of The Knife, aka Fever Ray], for example, has a voice that is very mysterious, with some darkness, desperation and anxiety in it. She's who we tend to think of when we want that atmosphere in a song. Wheras Lykke Li's voice is more sensual, girlish, secretive, whispery. Naive, if you will. The other criterion is that these people take part in writing the music with us.

DiS: How does this joint song-writing process work?

SB: Sometimes you have a set of chords and a melody. We'll approach, say, Robyn with three different songs that we have a few ideas about, and she'll – hopefully [laughs] – go "I really like this one." Then we sit down and discuss what the song should be about. We'll say we thought it should be a car, and Robyn says "No, it should be about a horse." Then good things happen, you drink some wine, eat some fish, do a cartwheel, and a couple of weeks later there’s a song. That's how we work.

DiS: Do you and Torbjørn [Brundtland, the other half of Röyksopp] always work together?

SB: Yes, we sit together whenever we make music. Side by side. It’s always been like that. We feed off one another’s ideas.

**DiS: Is there ever any friction between you?

SB: There is friction every now and then. I mean, you're dealing with two quite big egos. Both of us think we know best. But we always mange to solve it by...by fighting! No, we try to rely on insight and intellect when solving these problems.

DiS: If you did have a scrap, who'd win?

SB: Neither of us is really a fighter but both of us would be eager to win. Torbjørn can be very scary when he's angry, but my stamina might outlast his ferocity. Our battle would shake the earth and the heavens and whatnot. Actually, it would just be a punch and then one of us would cry.

DiS: It's quite hard to pin your sound down to one musical genre now, whereas at the start of your career you were tagged as a chillout act. Did you resent that?

SB: We've never seen ourselves as part of the chillout scene, We always thought we were more than that. We have our tradition and background in dance music, actually in house music. Back when we were 14 we were making breakbeat, early Prodigy, Johnny L, XL Recordings stuff. At the same time were were making ambient that got released on the Belgian label R&S. But while we've always listened to electronic music we'd also be listening to everything from Led Zeppelin to Vivaldi. As long as there’s something in the music, I'll take it. If i find a song by Bonnie Tyler or someone who's anything but credible and I like it, I'll cherish it without giving any thought to who actually made it. I think it's a good thing that people cannot label us. In the beginning with Melody AM it was easier for people to have a label to put on you. "What kind of music is it?" "Well, it's like Air." That's probably what people said. It makes it easier for people to grasp what it's about. If you said, "Well, it's these two guys from Norway who are into everything from Dolly Parton to King Crimson, Twisted Sister and Al Green, but play electronic instruments," you would go, "What the fuck? Sounds awful." That's probably why we were given that chillout label, because Melody AM fitted into the ongoing chillout thing of the late nineties, early 2000's.

DiS: The span of your career has seen the internet come to have a huge impact on the ways in which music circulates and is heard. What's your position on file sharing?

SB: I give it a lot of thought. I do not have a proper solution, but I really like the way Radiohead did it [with In Rainbows]. Obviously they have a huge fanbase so they had the freedom to do it that way, but I really like the concept of appealing to your own sense of justice and saying, "How much are you willing to pay for this? Pay whatever you feel is right." I like that approach. I don't think you can threaten people to pay, that's a bit worng, but at the same time I'm not the kind of guy who would just take something for free. If a friend of mine does me a favour, I would like to return that favour. I think most people are like that. They should be. A favour for a favour is what I think. If you like an artist and support what he or she is doing, I think you should give something back so they can make more music for you to enjoy.

DiS: But you think the consumer should have a say in what that 'something' is?

I think so, yeah. I agree that in the past music's been ridiculously expensive due to a few unnecessary links in the process. In this day and age when you can cut those links out it should become cheaper. But it shouldn't be free, because any artist has expenses that need to be paid. The Radiohead model is a nice way to deal with it. If I'm curious about a new band I will listen on Spotify or download it and listen to it on my iPod while walking or jogging, and if I enjoy it after two or three runs I’ll buy it on vinyl or cd. If I don't like it I'll just delete it. There's no point in having 3000 mp3 albums sitting on a hard drive somewhere that I'll never use. It's like having an attic full of crap.

DiS: Your second album, The Understanding, got pretty mixed reviews. Do you think it was misunderstood?

SB: To say people didn't 'get it' is snobbery that I don't want any part of. But I guess it wasn't what some people expected. Some people hoped for a new round of 'Eple' and 'So Easy', 'Poor Leno' and so on. But we didn't want to go down that route at that point. The Understanding is very much about longing and doubting and the wilderness, which summed up what we were thinking at the time. With the success of Melody AM came a few uncertainties. All of a sudden you have anything from girls offering themselves to you to people just wanting a part of you, which can be a bit strange. That's what that album was about. Whereas now we're past all that. Junior is more about having fun.

SB: Senior is more about sticking a fez on, smoking a pipe and clutching an ivory cane...

**DiS: There was a four year gap between The Understanding and Junior. What were you doing for all that time?

SB: Well, we did lot of touring and...living, I guess. Spending time with family and friends. Laughing and drinking and eating and sleeping.

DiS: That sounds very respectable. No controvierisal drug and hooker stories, then?

SB: That's all being kept under the table. I'll wait for the music career to fail before I reveal all the scandals in my autobiography.

Junior is out now on Wall of Sound. Senior will be released later in 2009.