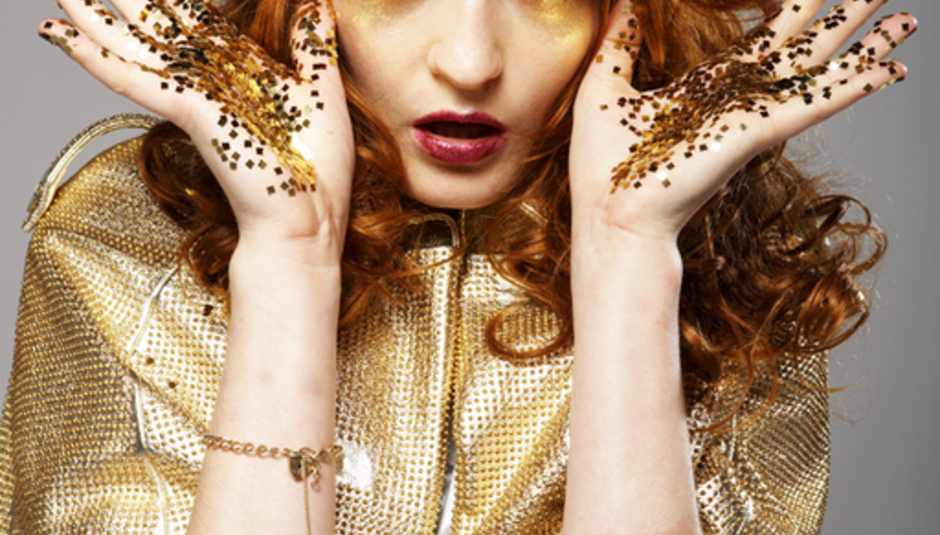 Two-ish years ago, a slightly erratic young redhead first started to twitch and scream her way onto various people’s radars. Florence And The Machine purveyed a natty line in bloodthirsty fairytales, her medium a megawatt vocal lilt, stripped blues gee-tars and booming, rudimentary percussion. Comparisons to Patti Smith, PJ Harvey and even Tom Waits were bandied around WITH APLOMB. And when her first single ‘Kiss With A Fist’ arrived it was, y’know, alreet, a morally ambivalent two minutes that was a little on the lightweight side, but came anchored down by a searingly intense cover of Cold War Kids’ ‘Hospital Beds’.

And then... hmmm... things didn’t go wrong as such; it’s just that second single ‘Dog Days Are Over’ was a bit bleh, and moreover demonstrated the fact that when she turns the vocals down, Florence Welch sounds a teensy bit like Dolores O’Riordan. Combine with her association with awful media personality Mairead from Queens Of Noize and the fact she took pole position on that dreadful BBC 2009 tips poll and it made one feel a little... uneasy.

Throughout this period DiS heroically stood on the fence, with a deeply ambivalent assessment from Everett True. Well no more; at a 1940s-style tea shop in Shoreditch, DiS attended an advance listen to forthcoming album Lungs, checking out what precisely Florence Welch and her Machine have been cookin’ up with producer James Ford.

It’s fair to say we were a little surprised.

Rabbit Heart (Raise It Up)

WTF? The new single is a complete stylistic volte face, a big boomy disco thing, all bewildering squalls of multilayered, choir-ish background vocals and ultra-glossy synths. Buried someplace deep beneath all of this is the real Florence, who appears to be screaming her lungs out, but is so buried under the insanely busy instrumentation that she sounds totally anonymous, a generic dance diva. It’s so bewildering in terms of its everything-but-the-kitchen-sink approach that maybe it needs a few more listens before one should actively accuse it of being bad. But in my notes I wrote ‘like a really gay Sarah McLachlan’. Which may not be a recommendation.

More disco. More bombast. Somehow manages to sound like the theme tune to some faintly depressing Saturday teatime show from the Eighties. Occasionally you can make out some words. Seems to be singing something about “bloody feet”. Could be interesting. Can't really tell, I am too distracted by being smacked about the head with a mallet hewn from disco kitsch.

I’m Not Calling You A Liar

Full on adult contemporary territory with this harp-smeared ballad. Potentially quite affecting were it done in her old style, i.e. stripped arrangement and lungs cranked to 11. Can’t tell because after about two seconds the song’s head is grabbed and shoved underwater in a nauseating sea of multi-tracked Florences. She is her own one woman X-Factor choir. This is horrible. So once upon a time Florence used to bash a stand up drum and it was quite cool, giving a rough, bluesy feel to an essentially pop endeavour. Yeah, fuck that, let’s just go for massively loud processed beats, the sort so bombastic they make you want to snort a yard of coke, beat the shit out of tramp, and scream “FUCK YES” at the sky. It’s so utterly nerve-jangling you could charitably describe it as some sort of experiment. Very charitably. Again, Florence appears to be singing something quite interesting, but I can’t really hear her. I’m being beaten to death by a twat with a computer.

Sparse, harpy ballad. Or at least that’s how it starts. Am already braced for impact. After mithering around MOR-ishly for a bit, Flo croons out the line ”so I’ll stay in the darkness with you” virtually a capella. Maybe there will be no rapey over-production here? Alas no. It is a bit like the point in the horror film where the victim thinks everything is alright and then their face gets stabbed off. Only instead of a knife, Florence has opted for the blunter instrument of more bloody drums and a kajillion multi-tracked versions of herself, screeching away. Is it possible to take out a restraining order against a chorus? I would hope so.

Sounds like Dido for about 20 seconds. I want to write ‘it’s a relief from the over-production’, but it’s not, really. And besides you can probably guess what happens after those 20 seconds. IT GETS REALLY LOUD AND PAINFUL. Like Meatloaf, but without the joy.

Girl With One Eye

...aaaaaaaaaaaaand the old Florence returns. A bit. This blackly whimsical blues fairytale has barely been tampered with since its original incarnation. You can make out the lyrics and everything. It’s pretty good. Oh, except for the last minute where Flo’n’James realise that they forgot to ruin it with studio excess and promptly do so. Cheers guys.

You Got The Love

Her Candi Staton cover. Oddly the listening party is deemed over as soon as it starts, the music turned down and the various parties who were earnestly nodding their heads a moment before now chatting away furiously. So DiS can't hear it properly. Not necessarily a bad thing.

Video: Florence & The Machine: 'You Got The Love' (live) Shoegaze Week: thoughts on My Bloody ...