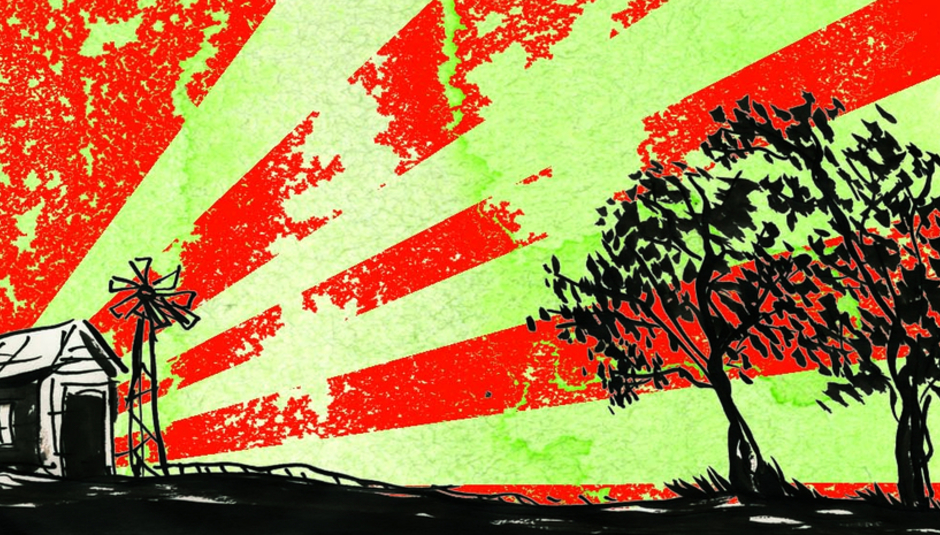 Eddie Argos talks us through their forthcoming album Art Brut vs Satan.

In his commentary you will find him saying loveable things like "Fuck it. I’m 28. I can do what I want and I want to read comics," and ranting a little, including our favourite call-to-arms'ish bit "Britain seems to be populated and run by T4 presenters and the cast of skins. Until we have The Mountain Goats, The Indelicates, Darren Hayman, Future Of The Left and Jeffery Lewis on prime time television and A listed on Radio 1, I think we should declare a state of national emergency"

Art Brut vs Satan is the bands third album. It's released in the UK on Monday 20th April via Cooking Vinyl and the US release follows on May 12th via Downtown Records.

I've been asked to write about the new Art Brut album. I've mainly written about the lyrics as that is the bit I do. If I was to write about the music I'd probably get it all wrong and confuse people. For example, I'm probably the only person in the band that thinks 'Slap Dash For No Cash' sounds like Motley Crue or that 'Demons Out' is reminiscent of Guns And Roses.

We recorded Art Brut VS Satan over the course of 10 days in Salem Oregon with the inimitable Black Francis at the helm. We'd known for a while we wanted to record the album in one take or 'on the fly' so we were delighted when Black Francis agreed to work with us. He is, after all, the expert in the field. We turned up, he pressed record. We jumped around a bit and recorded our songs whilst he conducted us and gave knowing advice. Job done.

Originally this song was about our Drummer Mikey. I was looking at him in the throws of one of the worst hangovers I have ever seen and felt sorry for him. So thought I'd sympathise by writing him a song. As I was writing it though I realised it applied to me as much, or maybe even more than him. So it is about the pair of us, Alcoholics Unanimous.

This was one of the first songs we wrote for the album and while writing it I remembered what fun it is that I can make the backing vocals say whatever I like. I think there are quite a lot of backing vocals on this album for that reason.

I used to be ashamed of reading comics. This song is me coming out and admitting I'm a bit of a comic geek. It’s supposed to be cool to read comics now what with The Watchmen and Batman films. But I don’t think the credibility has stretched to covering my monthly subscription to Booster Gold yet. But fuck it. I’m 28. I can do what I want and I want to read comics. I've always loved comics especially DC and whenever I've been down, for whatever reason, whether it’s a bad break-up, having a lousy job or maybe just a hangover, the combination of DC Comics and Chocolate Milkshake has always fixed me. With the help of those two simple joys there is nothing I can’t overcome.

I can’t drive and have no intention of ever learning. Trains and Buses are brilliant.

I’ve always been a bit nervous around girls. This song is mainly about that.

I have watched other much more confident men striding about talking to girls with no problem whatsoever, which I find quite strange. I can’t work out who is the odd person here, me for being nervous or them for having no shame.

So it’s called ‘Am I Normal?’ as I want to find out if I am normal or if those bold confident men are. After people hear it I’m hoping they will feel the same and give me the correct answer.

On our first album we had a song called ‘Rusted Guns Of Milan’ about how I was a little bit scared of sex. I’m fine now. Consequently, I‘m over compensating for my previous embarrassment. This song is about all the trouble my 'Rebellious Henchman' has got me into.

This song is not about Pop Music or Pop Idol. I watch TV on the internet. I have no idea what’s going on in Pop Idol and, since TOTP finished, I have no idea what’s in the charts. I like Pop Music. I understand the point of Girls Aloud; it’s fun to listen to, to get drunk to, to dance to. What I don’t understand is why people like The Kaiser Chiefs, The Wombats, The Kooks etc. Every time I turn on the radio I hear the same fucking awful songs that don’t seem to be about anything, it depresses me. The same idiots that buy these records are the same fucking morons who voted Boris Johnson in as the Lord Mayor of London. Gordon Brown probably has The Kooks Album and David Cameron is a Kaiser Chiefs fan. Q magazine is aimed at these people, with its five star reviews for Razorlight and U2. Has the world gone mad? Where is the passion where are the rebellious and interesting popstars? They certainly aren't coming out of Paul McCartney's school for gifted children or Sylvia Young’s finishing school for polite young Libertine sound alikes. It’s driving me insane that Britain seems to be populated and run by T4 presenters and the cast of skins. Until we have The Mountain Goats, The Indelicates, Darren Hayman, Future Of The Left and Jeffery Lewis on prime time television and A listed on Radio 1, I think we should declare a state of national emergency and take these people out of the democratic system. They are not to be trusted in deciding the future of our country. I am not joking.

'Slap Dash For No Cash'

These are the records I like. As you can probably already guess. I hate U2's over polished, vacant, emotionally bereft sound. I especially hate the fact that so many bands have taken it as a blueprint; presumably seeing it as a license to print money, as U2 are a very successful band. A fact that mystifies me. My favourite records are all pretty lo fi. All those early Mountain Goats records where John sang into a 'boom box'. Jeffery Lewis Albums always, to me at least, sound as if they were recorded in his bedroom, a fact that makes them feel a lot more personal. My favourite band ever is The Yummy Fur. I love the fact that they used to take money from one label to pay for studio time for a single, finish the single as fast as they could and then record an entire album in the allotted time. There is a line in this song about listening to a lo-fi recording that says ' I hear his friends hanging around, I hear his parents asking him to turn it down' This is not made up. There is a Gorky's Zygotic Mynki B-side in which you can hear his parents asking him to turn down the music he is recording - how AMAZING is that?

I'm not asking for people to artificially replicate a lo fi approach to their records and I realise I’m being overly romantic when describing these records. A lot of the time lo-fi records are recorded that way out of necessity and not for aesthetic reasons. Which to me makes them sound even better; more heartfelt and determined. This song is a sort of ode to the records I love.

Considering it’s a song mainly about Jeffery Lewis and The Mountain Goats, it’s strange it ended up sounding a bit like Motley Crue.

I've only just discovered The Replacements. Which is weird as it is exactly the sort of music I like. I presume no one ever told me about them as they must have thought I already loved them. This song is partly about how much I love them and partly about how much I've loved other bands in the past and been let down. I hope I'm not let down by The Replacements. I especially like Ian’s [and Jasper’s – Ed] backing vocals at the end of this song that highlight how deadly serious I am about buying second hand records and reissue CDs. They are better value, cheaper and come with extra tracks

This song is about an unusual quirk I have. Often when I fall into a daydream I start loudly singing. it can be quite embarrassing. I hope this doesn't make me sound like a hippie but this song is about how much I value having fun over having money. Which is lucky as I haven't got any money.

When I was younger I had a summer job at Harry Ramsden’s chip shop. I lasted a day. After finishing work on the first day I was walking home bare foot along the tarmac next to the beach and realised I'd much rather be doing that than trying to earn some spending money. I never had pocket money as a teenager so by giving up that job I was foresaking any chance of being able to afford much booze or the bus into town. But I didn't care. I would be much happier not being bossed around by overweight chefs and getting my hands dirty with urggh manual labour.

This is the longest song we have ever written. I'm a punk so had to be convinced to write a song longer than three and a half minutes but I’m really happy with the way it turned out. It is a little bit funky. When I sang the lyrics I sang them to just the Bass and Drums. I felt like a rapper.

I often wake up covered in bruises with little or no idea how I got them. I was told recently, when you notice a mysterious bruise you should push hard on it and then you remember where it came from. This song is me doing that and then slowly remembering the night before. I often take Zyrtek for my allergies and Advil for my bad back. The confidence given to me through those tablets that I wont be sneezing or feeling any pain for a little while often makes me feel invincible (especially when mixed with booze). Feeling invincible is very different than being invincible though. It is usually after a night of feeling invincible that I wake up covered in bruises.

Black Francis's young children think this song is about an Alien Abduction. A Brief History of Radiohead, in B sides