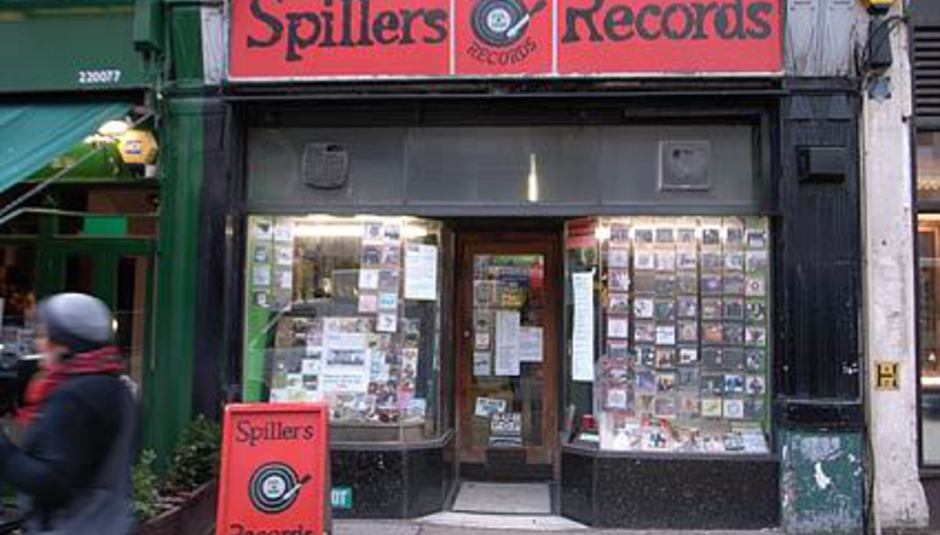 Spillers Records is the oldest record shop in the country, and it's also one of the best.

Operating next to a giant Borders in the centre of Cardiff, it's a shining bastion of independence in amongst the giant TV screens, shopping centres and high street chains.

As these new developments changed the shape of Cardiff city centre, things started to look pretty bad for Spillers, but the combination of extreme resilience and a legion of devoted followers saw them achieve the improbable and beat the big business Goliaths. For once, quality fought the system and won.

It's hard to pinpoint why anyone who passes through the doors of Spillers Records falls instantly in love but it's probably to do with the relaxed, family atmosphere behind the counter, and the sheer variety of music on the shelves. 1940's Gospel Compilations sit side by side with new releases and lost classics, and it doesn't take a minute to find the thing you've been looking for all your life. It's uncanny.

We passed through Cardiff last month and, like so many bands playing in the city, stopped in for an impromptu instore. Afterwards I cornered the owner's daughter Ash, who works in the shop with her dad, and asked her how it felt to have saved the family business, and what advice she had for anyone else seeking to plough the path of righteousness.

They sell cassettes too, by the way, and not just 2 Unlimited like at Oxfam.

Emmy: Last time I was here there was a campaign to save Spillers, what was that all about?

Ash: The campaign was to do with development happening in Cardiff. We're part of a complex here, nd we got a new landlord. Our landlords used to be a family firm but they got taken over by a multi-billion pound company who are based all over the world, and they wanted to double our rent. At the same time they were developing this area, which meant less road access, big holes in the ground, constant drilling. We didn't think it was the best time to be doubling somone's rent.

I seem to remember there were some high profile names joining the fight.

Columbia Records got involved quite heavily, and so did the Manic Street Preachers.

They're customers of the shop too, so it wasn't like they were jumping on a bandwagon. All the support was greatly appreciated.

What do you think it is that appeals to people about Spillers?

We're not the first of our kind and we're not the centre of the musical universe, but we might be one of the last remaining independent record shops, so maybe that's it. Things are so shortlived now. I mean, think about bands, you can't imagine a lot of bands' career lasting as long as someone like Bruce Springsteens anymore.

How has Cardiff developed as a musical city in the last few years?

There's been an increase in independent promoters, which is really good. More people are prepared to put things on a whim, and in less mainstream venues. For example, Swn festival, which started a few years ago, is brilliant.

Personally, coming from an art background, I'm always frustrated about Cardiff not having a modern art gallery. There's not enough funding form the government being put into the arts, but now people are doing it for themselves. Things are changing on a grassroots level, and people are working their socks off to make it happen. Which is just as well, as all these shopping centres make people act like lunatics.

Is it hard work keeping Spillers afloat as well?

It's really really hard, but it's incredibly rewarding. Like when we have instores and people come in that would never have come in before.

What's been your favourite instore?

I don't meant to namedrop but Rhy Ifans was really good recently. I had preconceptions about what he would be like but he was really good. Also, the look on the barmaid's face in the pub down the road when he came out of the toilet in an undersized t-shirt was priceless.

There's also a guy we've had in called William Elliot Whitmore. I always recommend him to anyone looking for soulful, traditional folk music. He's absolutely amazing.

What about local customers who are musicians?

My favourite local artist lives in West Wales and he's skint. I can't remember the last time he bought a record. His name is Alex Dingly. My favourite instore with a local musician was Gindrinker.

What made you want to follow in your father's footsteps and work at the store?

Haha, maybe because he wasn't rich enough for me to do something else? But I did want to follow in his footsteps. I did do a degree and I never ever felt like I had to join the record shop, but I was always interested in what he did. it really makes me happy, I don't think I would do it otherwise.

And what tips do you have for running an independent business in an increasing hegemonic world?

It's hard to say, cause I think we're still finding out for ourselves, but I really think you have to be very savvy. Spillers is the only independent record store in Cardiff, except for a fantastic dance specialist, which is why we've never gone into dance music, and we offer a really wide variety of music. It's either the best thing or the worst thing about us [laughs]. I really know our customers and I know they like their footstomping banjo players as much as they like their dubstep. We're not an indie specialist, or a blues specialist. We're competing with tesco's now, but that's another interview!