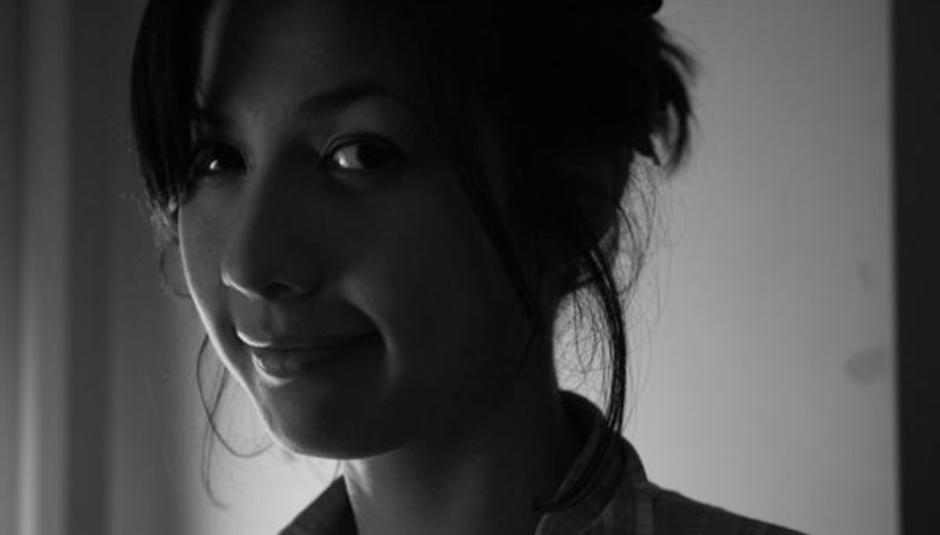 DiS loves Emmy The Great. We really do. First Love, the beguiling debut album from the band (for Emmy The Great is in actuality the collaborative effort of Emma-Lee Moss, Euan Hinshelwood, Tom Rogerson, Ric Hollingberry and Pete Baker) was released earlier this month, and a thing of beauty it is too. You might have noticed this, what with Emmy taking over the site last week and all. A bedraggled DiS caught up with her in Exeter earlier this month to chat about the album, their own label, writing, lambs, and new world orders.

DiS: The album’s coming out on Close Harbour, a label you set up. How come you went about doing it that way?

Well, first of all we set it up to put out the EP, which nobody wanted to put out – we literally couldn’t get anybody to even put out a single or anything like that. So we created it just for the sake of putting that out. Then after that came out, it was like “oh, this is interesting” – all of a sudden people wanted to talk to us about deals, but I suppose we’d already shown that we were perfectly capable of doing it ourselves, and nothing came along that worked quite as well.

DiS: You’ve mentioned some bad experiences with the bigger music industry at large?

Yeah, I guess so. I live in London, so – you know, I can’t sneeze without infecting someone from the music industry, and I’ve come across a lot of people. There is definitely a way of doing things. Lots of rules and things that I just couldn’t deal with.

DiS: How do you feel about the fact the album’s out next week? When was it finished?

We finished it last June – it was going to come out three months later in September, and then we hit a massive stumbling block, which meant it had to wait until after Christmas…which was difficult, and a disappointing period.

I felt like it was a record I believed in sooo much last June, but I didn’t think…I don’t know. I guess I might have lost interest. Or not interest! I guess I lost faith, in myself, for not putting it out when I wanted to. It’s been really hard, putting it out ourselves.

DiS: And you did it with The Earlies?

Yeah. We produced it, and they kind of oversaw it. We went past their studio when we were touring last February. We popped in and met them and just really got on. At the time I really wanted to go to America, but we just didn’t have the money. And when we met The Earlies it just seemed – like these guys didn’t think the same way as everyone else. They just thought the exact way we did, so it was really serendipitous.

DiS: You have this tour – which is pretty relentless –

We’ve got three days off this month. But it feels like the right thing to do at this point.

DiS: Are you excited about the whole thing?

We’re a bit apprehensive, ‘cause we’re all going to get really fat and sick at some point, but at the same time we’ve been waiting for this to come out for six months. We’ve done a couple of gigs…we have done some stuff, but if I’d have wanted to I could have gone to my parents’ house, slept on my old bed everyday and just done nothing. So to have something that we have to be doing – doing promo for this record – it’s like the most amazing thing, that I thought would never come.

DiS: What are your plans for the rest of the year?

We’re going to do festivals as usual, and we’re going to tour other countries, depending on when the album comes out. America before the end of the year, definitely.

DiS: As a writer, you’ve interviewed Diane Cluck in the past. How was that, ‘cause don’t you totally love her?

She stayed at my house! And it was kind of weird, because I totally love her, but…she needed somewhere to stay, and we were touring with her, so I said she could stay at mine. And you know when you have someone who you feel totally in awe of? It’s like, a really major thing. And…sometimes I don’t like interviewing people who I’m really in awe of, it’s quite strange. But we were at Green Man, and I’d seen her already that afternoon. Then at one point I had a dictaphone when we were ‘round the campfire, so…

DiS: Do you find it weird being interviewed yourself, when you’ve been on the other side?

I guess it makes me want to not act like a brat, ‘cause I’ve interviewed people before who have really let me down.

DiS: If you weren’t doing this, what do you think you’d be doing?

I always wanted to be a writer. My whole life I’ve wanted to be a writer. But…I would always try and write a story, then think of a plot, and be like, "I can’t be bothered to write it – I’ve already thought of the plot." Whenever I read a story, I’m not reading it for the style hardly ever – I’m always reading it for the plot. So that’s why I write songs maybe, ‘cause I find it easier. But if I stopped writing songs…I like writing generically. I’d end up doing something like writing for a 'paper about carpets. And then in the evening I’d write Mills & Boon or something like that.

DiS: How was it going out to Omaha with Lightspeed Champion?

Yeah…it was amazing. We stayed right next to Conor Oberst’s house. I already knew Tilly & The Wall, and they’d be like, “guys, let’s go bowling!” That was something that was so different to London. In Omaha, there’s such a community, where in London it’s like a series of adversaries – you know, like different tribes all trying to beat each other. But in Omaha they’re not spoiled by the amount of stuff going on. They had to develop, I suppose, and are a group of people who really care about each other. And that’s what we try to do in our band – there’s no rivalry, or shit stirring. And it should be like that, for everything.

DiS: You were born in Hong Kong before your family came over here when you were 12, and you talk about the English countryside as a major influence on your songs…

Yeah, when I lived in Hong Kong I went to a school where I was deemed very white – or English, rather. I was the most conspicuous person. And of course all the western kids thought I was Chinese. But when I came to England it was just me and my family in the summer – and we’d come every summer, and it was just so amazing, and I just felt free, and there were lambs…we’d go on walks in the country and stuff. So when we moved here it was like living in the land of eternal holiday, and I was so happy. I think I just idealised it, so much. And also, when I was a kid, I didn’t have any friends – all I did was read books, and lots of them were English books…classics, like Thomas Hardy, Brontë’s stuff, and so I grew up thinking about this amazing place in England, and escape. DiS: Do you have a favourite book or author at all?

Yeah, my favourite book is… (due to an almost unintelligible dictaphone I couldn’t pick this up. But sounds like (Something) Diary? The Rum Diary, perhaps?). I’m reading a lot of diaries at the moment. When I was a kid – well in my adolescence – it was all Wuthering Heights…then I got really into sci-fi and was all about Hitchhiker’s Guide, but now it’s diaries. I’m reading Sylvia Plath’s diary…and biographies too, of certain people. There’s also this amazing book that you have to read called Them by Jon Ronson, which follows people who believe in conspiracy theory. From extremists to like, crazy people who live in the woods in the middle of America to the Klu Klux Klan – all these people believe there’s some crazy new world order, or conspiracy. And there’s that guy who believes in reptilians, David Icke…he links them all together, and tries to explain the whole thing.

At this point we get slightly waylaid. It’s probably a good point at which to split the interview, being as we’re about halfway through and all that. Part Two: tomorrow.