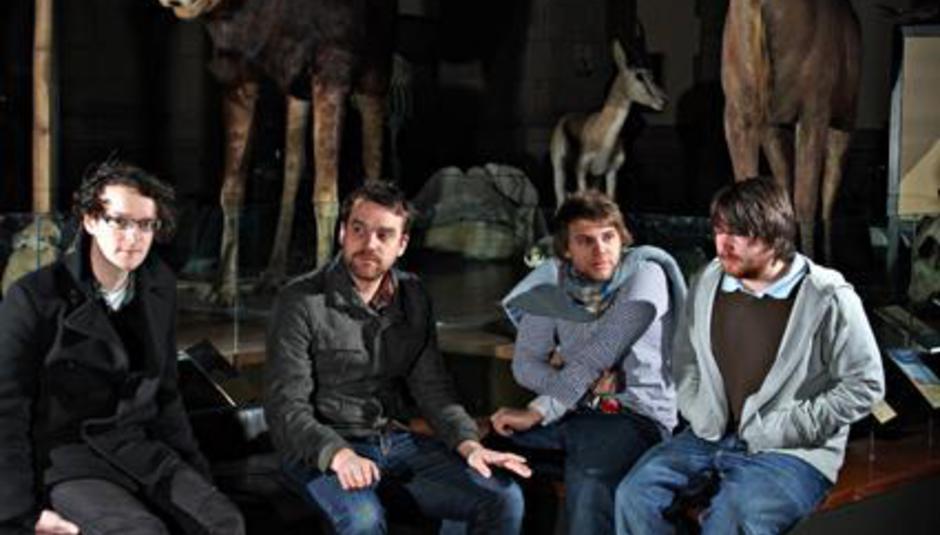 Scottish post-squall fellas Frightened Rabbit had the enviable task of taking their much-loved band out on the road with Death Cab for Cutie. DiS asked them to keep a tour diary, here's what came back.

Ben Gibbard’s head has turned into a steaming green pumpkin. He’s laughing like Brian Blessed and pointing at my wincing face and I don’t know why. I turn around and there are lots of people I may or may not know doing the same, but their heads are covered in peanuts and there’s a performing rhino rearing up behind them, decked out in jewels and karate robes. The scene roars into a crescendo just before I am awoken by an audience of idiots goading another idiot into goading a pair of idiots on the telly. Fuck fuck fuck. Its 10am in Dublin and I’m watching Jeremy Kyle on a hotel TV. Was the loud dream worse than the reality telly? Hard to say, as its particularly hard to even think at all at this point. I’m suffering from the kind of jet lag that makes my brain think that it’s the 1960s and that I am a woman named Peter who likes to wear only the finest perfume and no clothes. In other words, the lines have been blurred and it doesn’t even matter who or where I am. I do know I was in Dallas the day before, and I also know we are playing music to a lot of people tomorrow in Belfast, as we start out on tour with Death Cab For Cutie. Like I said, fuck fuck fuck! (Scott)

Ben Gibbard is shaking my hand and saying "hello." His head is a normal size and he is not pointing or laughing at me. I assume that this is real and that I am in Belfast, in a large covered fish and farmer’s market/rock venue. You can assume the same, though some of this tour diary will be lies. It's more fun that way.

Truthfully though, when we first meet Death Cab, they come across as such genuinely lovely people that there must be a catch. Where’s the crack, as crack addicts say? There is no crack – Nick and Ben seem just as excited as we are that we’re joining them on tour, and it's immediately apparent that they are looking out for us.

As for the show, it goes well… we play the hits: 'Highway to Hell', 'Hard Habit To Break' and 'Ballerina Girl'. The crowd seems to enjoy it, or at least humour us. Part of me does feel like a 6 year old doing a ropey ballet dance before Death cab go on. They sound incredible, and it's wonderful to watch. Yup yup yup. (Scott)

Today, I spend a little time with a pro roadie, I’ve some tech shit to do (strings to change). He shows me his workspace full of wonderful flashing lights, shiny tools and trinkets. I have no idea what half this stuff is and think Death Cab must use guitars from outer space if he needs all this. He pulls out a massive ruby red power drill with skulls all over it, powered by the blood of Sid Vicious. Waving drill, VvvvrrrrrrrRRRRR!!!!

Roadie, “You can use this if you want.”

I’m thinking how the hell do I change strings with a power drill? “Erm, No thanks. I’m good just winding them by hand.”

Tech stuff sorted and it's time to go on stage. I can’t get my head around how many people we are playing to. What a privilege it is to open for death cab, unbelievable!

After the gig there is a few people waiting around outside, Scott is surrounded by girls throwing flowers at him. He’s the new Morrissey. We herd everyone in to the back of our van and drive to Belfast. With an early ferry to Scotland tomorrow, Fraser our driver has orginised a rave, we stay up till 8 listening to all the classics: Ebenezer Good, Set you Free, Charlie Says and a rare QFX cassette someone someone pulls outta thin air. It’s just like the metro scene back in ’95. (Andy)

We’re so close to being home but still so far away. It’s the Corn Exchange tonight where I’ve previously seen Gomez, DJ Shadow and Doves. The Corn Exchange has a slight leisure centre feel to it so I packed my armbands and my goggles and I’m ready for the off.

It’s been so long since we’ve been home I feel like a tourist who should be asking where the castle is, The Royal Mile and that wee Scottie dog that did something once. As usual at 8pm we take to the stage and this one feels a bit different from the rest. People actually know who we are and it’s more special than the previous gigs. After we play it’s family time!! Everyone’s family is here and the dressing room is filled with cries of:

“Are you eating enough fruit?”

All of which I think were said by my Mum at least 3 times!! I’m heading back to Glasgow tonight for one night in my own bed and an evening of laundry duties as the sweat and mould of US gigs is still clinging to all my shirts.

An 8am van call sees me get a total of 4 hours sleep which is actually pretty good for this tour!!! (Billy)

After a very short snooze in MY OWN bed, we agreed to meet outside Queen St station at 9.20am but I find myself running late as per usual, although this time I have a good excuse. I passed a GREGGS on my way to the van and could not help myself. I ended up spending a grand total of eight pounds and twenty pence but it was well worth it. My lateness was forgiven when I dished out the bakes. (Billy)

WOW! We have our own cottage tonight filled with cereal, milk and bread. Coco Pops or Crunchy Nuts? Fuck it, I’m gonna have a combo. This was probably my favorite night on tour for a while. It was great to have our own space. (Billy)

First time in Sheffield for the Rabbit. Looks pretty bleak. It’s a grey day and the clouds are low. Last night I left my jacket against a lamp in the dressing room and burnt a bloody massive hole through it so I’m pissed off and look like a fucking twat who let a firework off under his jumper. Not off to a good start. The Sat Nav isn’t picking up any vintage Mongolian minx or badger winter jacket stores so I settle for the high street.

The day gets better and I’ve a new hood up just as the rains on. At the show I’m watching Death Cab from a small birds nest style view point at the side of the stage, after a while I feel like I’m spying on them. Thinking I’m quite perverted I move down to the front to stand with the non perverts. After the show we head to catch the end of Dananananakroyds set at The Harley. What we’re in time for is worth the trip, an encore of topless flying torsos. They’ve a career as gymnasts! (Andy)

Dear tour diary, Janet finally looked at me in class today. After a year of staring at the back of her perfectly shaped head in Mr Poppy’s maths room, she turned around and looked at me with a face that was half disgusted derision and half ‘There’s some mouth sucking coming your way, mister!’ Maybe it was in fact nine tenths derision and one tenth ‘face sucking’ but I DEFINITELY detected a tic of love in her eyelid. In other news, we had the privilege of playing the magnificent Brixton Academy later that night, though I could barely concentrate, the rush of the stolen glance still thriving in my brain. So yeah the show went well and, like, whatever. I couldn’t wait to get back to the hotel to lie down, close my eyes and think about Janet riding a camel. (Scott)