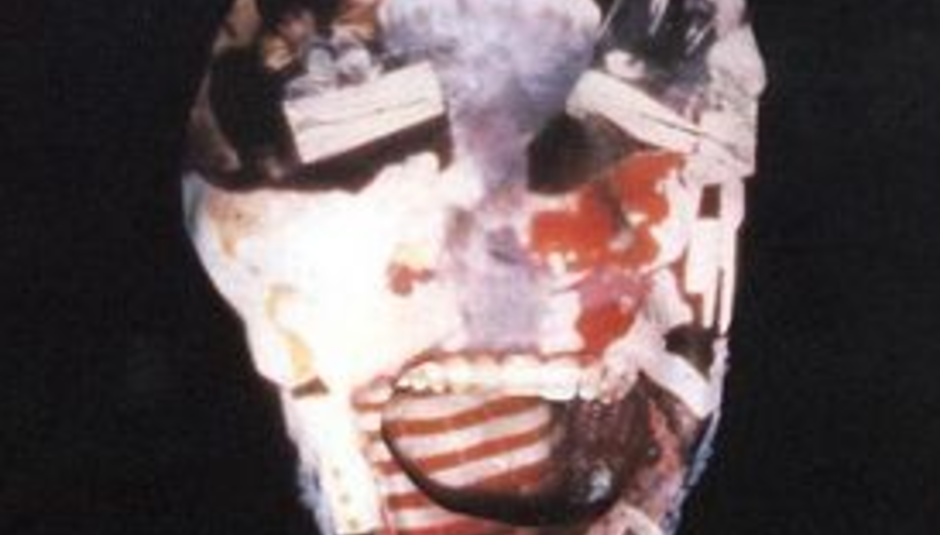 Judged by its cover alone, Deceit (1981) is the great prophetic record of the era – the front depicts a scream beneath a mask that is a collage of: Mushroom-Cloud between-the-eyes; JFK & Khruschev shaking hands; Stars & Stripes across the tongue; Ron & Nancy on the forehead. These are the images still familiar in 2008. The lyric-sheet is scattered with the same clippings, and some more helpful captions. Much of this is identical to the collage ingredients for OK Computer (1997) and its singles: what to do in the event of a bomb, or when the siren sounds; where tactical nukes are deployed, worldwide; those oddly dehumanizing line-drawings of how to prepare your fall-out shelter. Deceit came out in 1981, though – a couple of years before Star Wars (the Strategic Defense Initiative); before Donald Rumsfeld shaking hands with Saddam Hussein; before the first massacre of the Kurds. Ten years later, GW1; ten years further on, 9/11; then the War for Oil, then the Credit Crunch; and only this week can we see real hope of a decline in Republican war-mongering and financial mismanagement (the legacy of Milton Friedman, via Reagan & Thatcher). You know most of this; the point is, to get a sense of history… but also a sense of "prophecy" as a meaningful term in the context of avant-garde music.

Back in 1979, punk in the sense of scuzzed-up glam or sped-up blues had already exhausted its capacity for subversion. Nonetheless, a door had clearly been opened for the experimentalism of post-punk (in a loose sense), and within that (or overlapping), a kind of proto-industrial music that has little to do with Ministry, NIN, or Front 242. Alongside Lydon's definitive nail-in-the-coffin of the Pistols – Metal Box (1979) – This Heat's debut was the sound of re-invention and refutation, both musical and ideological. Heavier than Throbbing Gristle or Cabaret Voltaire, the industrial analogies (at the time) require some contextualizing: industrial as a simile (metal on metal), industrial as a reflection of process (customized machines), industrial as an allusion to critiques of the "military industrial complex". The best (or worst) was yet to come, however…

Deceit (1981) is prophetic, for a start, in that it's glossolalic – it's gibberish, it's speaking in tongues, it's too many ideas at once, and if you throw them at the wall, some of them are bound to stick, and look like a warning three decades later, if not like Revelations. Thing is, prophecy often attracts the wrong people, and gets ignored by the rest, when they assume it must refer to some specific event in the future (i.e. Kabbalism), rather than referring to the horror here and now, but visibly imminent to those who can see the historic patterns (…which is one aspect of Gnosticism). Track 5, 'Cenotaph' spells this out: "his-tory / his-tory / repeats itself / repeats itself / Poppy Day – remember poppies are red / and the fields are full of poppies" – it's literally a song about decoding symbols, and not letting the signal become noise; it's not a Fuck You to the jingoism and self-righteousness of the generation who "served" (as Sid, Siouxsie, and others claimed their Nazi regalia was meant to suggest), nor does this song disrespect the dead, but it does demand that we re-consider our values. The most recognizably "punk" track on the album, 'SPQR' (Track 4), identifies another repetition, and how we're taught by rote to repeat the values, and sometimes the mistakes, of our parents – right back to the imperialism and centralized government of 2,000 years ago: "we're all Romans / we know all about straight roads / every road leads home / home to Rome / amo, amas, amat, amamus, amatis, amant."

The devastating industrial freak-out, 'Makeshift Swahili' (Track 8), condenses most of these ideas into one song, although you wouldn't know it at first from the Dalek-voice: "…makeshift she sings / in her native German / you try to understand / what she's trying to say / she says 'You're only as good / as the words you understand / and you, you don't understand / the words.' / CHORUS: Tower of Babel!!! / Swaaaaaaahili!!! / It's all Greek to me!" The middle-eight introduces a pretty guitar figure, and a second voice relates a fragment of history that might have been dropped in as a sample, years later: " 'we give you firewater / you give us your land' / 'white-man speak with forked tongues / but it's too late now / to start complaining…'" The sinister drones resume almost immediately, and then the song explodes with an intensity surpassing punk at its most violent – Charles Hayward shrieking "Rhubarb! Rhubarb! Rhubarb!" Granted, this track may not be the most obvious demonstration of the genius of This Heat – Yes, Babel remains the best-known parable of the dangers of imperialism (if not globalization) collapsing under the weight of its ambition; there are also hints that language is power, and literacy was an instrument of subjugation, in the case of the Native Americans, rather than being the gift of enlightenment (see also, Gang of Four's contemporaneous Entertainment!). These allusions operate according to the collage-principles of juxtaposition and partial-tearing to create new meanings – collage being the best known Dadaist strategy – but This Heat also employ sound-poetry and a kind of automatic-speaking akin to channelling and possession (these being associated with Dadaism's loopier, more magic(k)al experiments, pre-WWI). Art-history lesson almost done, it remains to point out that when inter-war Surrealism re-visited Dadaism, it used the slogan "Surrealism in the service of the revolution", and was firmly Marxist in its orientation. If 1970s English Progressive Rock was a debased surrealism in the service of trippiness, This Heat brought the revolutionary spirit back.

What of the rest of the album? It's a complex beast, whose intra-textualities are as numerous as the inter-textualities. The use of loops, drones, found-sounds, and unusual percussion (girders, dummy-heads) was so elaborate that you have to look to The Beatles' 'Tomorrow Never Knows' for a precursor, and as far ahead as Aphex Twin when describing the more danceable and abrasive tracks. A guitarist as evil – but subtle – as Charles Bullen wouldn't be found until Dave Pajo (of Slint), and if you want a comparison for the first album, only Liars have come close, with Drum's not Dead (2006). Personally, I can hear the ghost of Nico channelled into This Heat's weird mix of fucked-up lullabies (Track 1: 'Sleep'), and drone-based proto-industrial nightmares. The drawing of parallels between the End of Rome & the Cold War Era is also very Nico, and the phrase "the sound of explosions" on 'A New Kind of Water' (Track 10) feels like a reference to Eno's "bomb-noises" for Nico's The End. (Eno also recorded Manzanera's pre-Roxy band, Quiet Sun, who included one Charles Hayward, later of This Heat. Rhubarb Rhubarb.)

Opening track 'Sleep' tells us we're all unconscious, lulled by commercials (hence "softness is a thing called Comfort"), and these operate on us like Pavlov's dogs (CHORUS: "stimulus and response"). 'Triumph' might be suggesting a parallel between Neighbourhood Watch (imported from the US in 1982 – a landmark in the history of surveillance), and the early years of Nazism, when Riefenstahl assembled her filmic montage Triumph of the Will. 'SPQR' is sung in the first person plural and refers to the supposedly democratic electorate as "unconscious collective" – Cold War propaganda and sci-fi alike often fantasized the enemy as an insectile hive-mind, but this song isn't about an external enemy: the enemy is now internal. 'Independence' (Track 9) is, quite literally, the Declaration of Independence. Ask yourself, as a UK-citizen, have you ever read it? Do you know what it says? Could you imagine trying to implement its ideals now? Doesn't its endorsement of revolution sound – well, "un-American" (as the Patriot Act defines "American")? The climax is post-punk masterpiece and personal favourite, 'A New Kind of Water', which layers un-synchronized drums, bass, and a chiming guitar line – a distant siren that hasn't yet been recognized as a warning signal. As the parts cycle, and change in volume, the notes interact differently. The initial chorus vocals are those of impotent, infantilized consumers ("we were told to expect more / and now that we've got more / we want more"). After that, the vocal delivery is soulless and hollow – Winston Smith at the end of 1984 – we have hope, it says: 'a cure for cancer / we've got men on the job.' Urgency increases… the drums begin to pound… you realize the apocalypse is here and you wish you were in Neverland ("fly away Peter / hideaway Paul…"). The title of the final track is written in Japanese characters, transliterated into Romaji ('Hi Baku Shyo'), and then translated into English ('Suffer Bomb Disease'). There are no words in this murky, marshy soundscape – maybe this is the world in which only cockroaches have survived. Maybe English-speakers are only tolerated as slaves of the victorious "Yellow Peril" (hence the Romaji-script). Then again, maybe the bomb has already dropped, and we became insects without realizing it.